Scoring points on the past

One club alone, Ardoyne Kickhams, lost the equivalent of an entire football team during the conflict. Young leaders too, like Terry Óg Enright, were slain in their prime. His club, Gort na Mona, named their home ground in his honour

HERE’S one of the articles in the latest edition of An Phoblacht free to read.

NOT FOR the first time this year, Derry Gael Joe Brolly has found himself in the midst of a public controversy. And, not for the last time, serious issues got lost in the media fog, political spin and superficial analysis.

Joe Brolly was speaking about his own GAA club in Dungiven, named after one of the 1981 Hunger Strikers, Kevin Lynch. As an avid Gael and member of the Dungiven hurling club, Kevin captained the Derry team which won the special All-Ireland under-16 title in 1972. He also inspired the club’s motto: “Misneach is Dilseacht” (“Courage and Loyalty”), qualities identified with Kevin Lynch. For Joe Brolly:

“That’s the way societies and communities work. Kevin played hurling for Dungiven and for Derry, and the hurling club was named for that reason. We’re very proud of him.”

He advised critics of the club name that it was none of their business.

Some of the chattering classes decided to beat up on Brolly for speaking his mind. Meanwhile, political unionism belched sectarian slurs about ‘fanaticism’, ‘terrorism’ and the GAA being merely ‘the IRA at play’. For some, it seems, the old paradigms of the past are impervious to peace. These are the preachers of ‘sackcloth and ashes’. They are also the public speakers who have shared platforms with unionist death squads.

Nowhere else in Ireland are members of Cumann Luthcleas Gael subject to such menace, threat and demonisation. It has always been this way in the Six Counties. Being a member of the GAA was reason enough to be shot dead.

The list is too long to be exhaustive: Aidan McAnespie shot dead by British soldiers as he walked home from a football match; Seán Brown locking the gates of the GAA club he chaired only to be brutally abducted and killed by a unionist death squad; and many more. Involvement or silent approval of state agencies was barely disguised.

In Belfast, where the worst of the war occurred, the greatest number of GAA fatalities was sustained. There is little doubt that the development of the GAA in Antrim, especially in Belfast, has been impaired by the impact of the conflict. One club alone, Ardoyne Kickhams, lost the equivalent of an entire football team during the conflict. Young leaders too, like Terry Óg Enright, were slain in their prime. His club, Gort na Mona, named their home ground in his honour. In Ireland’s second city, the affinity between the GAA and the values of the local community is authentic. Those linked to the struggle for national independence are among the names of local clubs: Pearse’s, McDermott’s, O’Donovan Rossa, and Sarsfield’s, to name a few. This reflects the sense of community and belonging commonplace in the GAA in every part of Ireland. The difference is that many of these bonds were forged and formed in the context of the conflict which partition ensured was confined, for the most part, to the Six Counties. 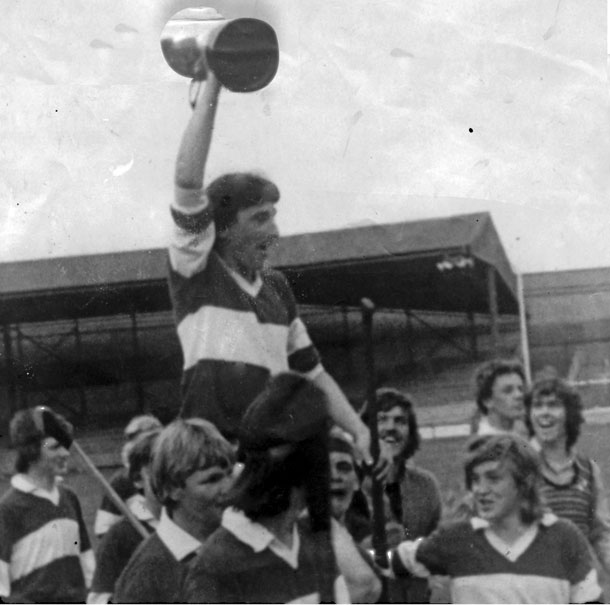 Many teams travelled down from the North to sit in changing rooms after the match only to hear platitudes from the managers of Southern opponents: ‘Keep the game alive up there,’ they’d say.

They didn’t have to go home from training through garrison towns and British Army and UDR checkpoints, with their hurl in their hand, their heart in the mouth and the odious and pervasive sense of oppression. It wasn’t the GAA many people had to fight to keep alive: they had to fight for survival.

Thankfully, those days are behind us.

GAA grounds once confiscated by British forces, like Crossmaglen Rangers, are now free solely for sporting purposes. The same can be said of Casement Park, which was once occupied and fortified. Instead, for the first time in the history of the Six Counties, a huge investment of £61.5million has been approved by the power-sharing Executive, including the DUP. No mention of the fact that the stadium is named after a man convicted by Britain of treason for gun-running.

The Casement Park project will provide a timely economic stimulus with resultant infrastructural improvement and sustainable employment in the heart of the most deprived constituency in the Six Counties. With the home of County Antrim GAA soon to become the provincial headquarters of Ulster, a renaissance in Gaelic games is possible in Belfast. But the dividends must be visible, accessible and available to local people.

For peace to become embedded, government institutions must become realigned to the reality and rights of the nationalist and republican community. That includes the thousands who are involved in the GAA.

In ways as yet unimagined, the Casement Park project could become a vehicle for genuine reconciliation. In striving for methods for coming to terms with our past, new thinking and new paradigms are required. For it’s not only the dead, and not just our own dead, who deserve to be respected and remembered: it’s also the living.

The full edition is available in shops nationwide or online to Premium Subscribers on PC/Mac now for just €10 per 12 issues, last Thursday of month (due to circumstances beyond our control, it is available to iPad and iPhone users the Monday after printing).