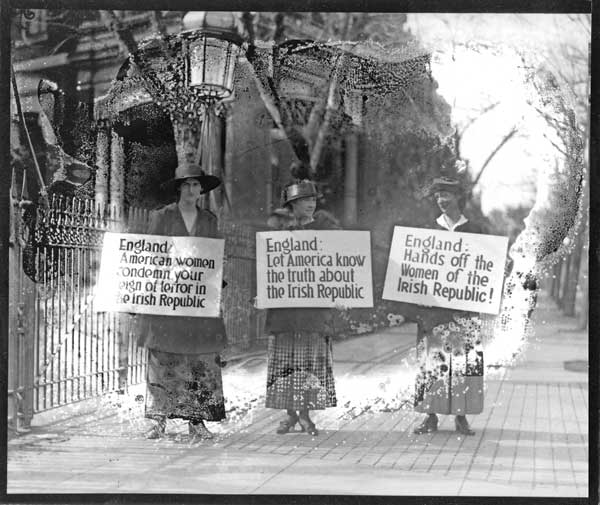 Protesters picket the British Embassy in Washington during Easter Week 1920

Mollie Carroll had a trick up her sleeve, one that would sensationally grab the headlines

EASTER 1920: Groups of Irish-American women take to the streets of US cities in support of Irish freedom and to commemorate the Easter Rising of 1916. A novel protest at the British Embassy in Washington led by Mollie Carroll would become a world first and make front-page news across the globe.

On 3 April 1920, the Milwaukee Journal reported:

“Vivacious Ireland, in the guise of a dozen pretty Irish-American women, Friday stormed imperturbable England in the heart of Washington when the women, carrying placards that told of Ireland’s wrongs, picketed the sidewalks in front of the British Embassy.”

US police officers whose “appearance and brogue” led the reporter to believe they were “sympathetically inclined” looked on from across the street as the women marched outside and attempted to gain entry to the building while carrying banners condemning Britain’s reign of terror in Ireland.

One of the women, Kathleen Sheehan, “succeeded in pressing some Sinn Féin literature on a bewildered footman at the back door of the embassy, having been repulsed at the front portal”.

Two Connecticut women opposed to Irish independence attacked one of the picketers and destroyed her placard at the front gate before they were arrested. The Journal reports that “embassy staff invited Miss Mollie Carroll, the prettiest of the pickets, in for a cup of tea”.

The Secretary to the US President informed the British that they regretted the protest at the embassy and would take “effective measures” in future to prevent the demonstrations. Mollie Carroll, a stage actress and singer based in New York, was defiant:

“The thought of arrest makes no difference in our plans, and if soldiers come it will be an easy matter to climb the fence into extra-territorial territory and force England to recognise us at least.

“Our primary objective in coming to Washington now is in the hope of getting some action from the United States Government that will prevent a massacre in Ireland.”

The women continued their pickets on 4 April, Good Friday, to “call attention that Ireland was being crucified”. The next day, police informed the protesters that they had 15 minutes to leave. The women refused to do so and Mollie and another woman,  Mary Walker, were arrested and taken to a local police station although released shortly afterwards. Coupled with the statements by the US Government, it was announced the pickets would cease – but Mollie Carroll had a trick up her sleeve, one that would sensationally grab the headlines.

“Picketing the British Embassy by aeroplane was the newest strategy adopted this afternoon by the women who have been conducting  a spectacular propaganda campaign in Washington for the last five days for the cause of Irish freedom.”

It is believed that the plane used by Carroll was provided and financed by Democratic Party Governor Albert Cabell Ritchie, who had been a long-time supporter of the establishment of an independent Irish republic.

The flight was a dramatic feat, not least because it occurred at a time when civic aviation was in its infancy and the general public were not yet ready to put their confidence in its safety.

Flight magazine said Carroll resorted to using the plane to drop leaflets after “it became apparent that the police intended to make arrests as rapidly as the women appeared on the ground about the embassy”. After obtaining the aircraft in Maryland, Mollie flew over the British Embassy, the US State Department and Capitol Hill, dropping literature “in the interest of the Irish cause”.

Her actions made the front pages of many newspapers, including The Washington Herald, which ran with the headline “Picketer scatters Irish protests from airplane” and told how Mollie “outwitted the police who had been instructed to prevent further ‘insulting’ of attachés of the British Embassy”.

Following the flight, the women resumed their pickets with several of them later arrested.

Patsy Peril of Limerick City, who provided An Phoblacht with much of the information on Mollie, says with the anniversary of the Easter Rising approaching, it is time Mollie Carroll and her compatriots are recognised and given their proper place in history. 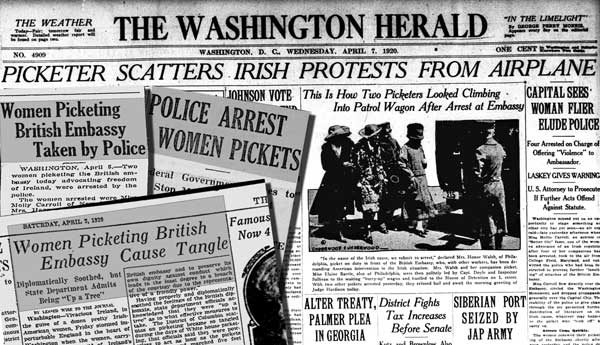