A treasure trove of Irish political and social history 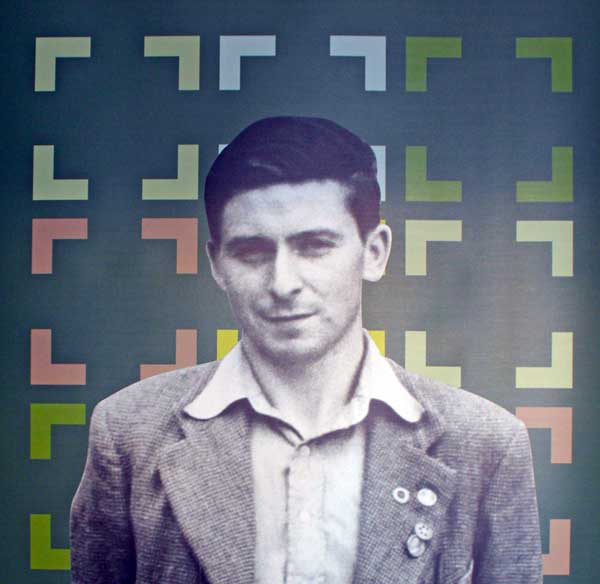 THE IRISH NATION will forever owe a debt of gratitude to Jackie Clarke.

A Ballina-based fish merchant and lifelong member of Sinn Féin, Jackie amassed one of the most significant private collections of Irish political history in existence.

The huge and all-embracing historical archive is a treasure trove of Irish history packed with artefacts, photographs, books, pamphlets and posters assiduously collected in the days of scrapbooks, long before the Internet, the World Wide Web, computers and social media.

Long-time friend and republican comrade Michael Fleming in Ballina recalled to An Phoblacht that Jackie was one of the first people in Mayo to have a cine camera as a dedicated recorder of Irish history. He was a collector who searched high and low for historical memorabilia, scouring the bookshops that used to line the Liffey in Dublin in the 1940s, only 20 years since the Civil War, Michael points out.

The entire collection of more than one hundred thousand items — from the United Irishmen to the 1990s — is a testament to Jackie’s commitment to Ireland’s social and political history and his solid commitment to the Republican Movement and Sinn Féin down the decades.

It is a must-see in Mayo.

OVER THE YEARS, a number of extraordinary private republican archives have come into being; generally due to the dedication of small groups of individuals. The Republican Museum at Conway Mill in Belfast is the best-known and a fixture on the more informative tours in the city featuring ‘The Troubles’. The importance of the Jackie Clarke Collection in Ballina, County Mayo, is only now being realised.

Located in the west of the country, close to the resting place of two IRA ‘Long War’ hunger strikers, the rare foresight, energy and personal political commitment of its creator opened to the public in April.

Quite simply, Clarke, a Ballina-based fish merchant, amassed one of the most significant private collections of Irish political history in existence. With in excess of 100,000 items, it is also one of the largest. His inspiration is indicated by the major themes of the extensive holdings: local, regional and national political history. Ireland’s republican heritage from the United Irishmen to the 1990s is fore-grounded, reflecting his lifelong membership of Sinn Féin in which he featured prominently across the west of Ireland and far beyond.

Clarke was involved in the arrangements to inter Michael Gaughan in the Republican Plot in Leigue Cemetery in June 1974 following his sudden death from force-feeding in Parkhurst Prison on the Isle of Wight. Gaughan’s shocking fate when seeking political status led to the abandonment of the practice in England and contributed to the repatriation of four IRA hunger strikers to Ireland, including Gerry Kelly, now a Sinn Féin MLA in the Assembly.

Another Mayo IRA Volunteer, Frank Stagg, died on hunger strike in England in February 1976, prompting preparations to bring his body from Dublin Airport to Leigue Cemetery. The seizure of his coffin by state authorities in Shannon rendered this impossible and he was buried instead under concrete during a funeral his mother could not attend. A resolution of this impasse was promised in August 1977 when Clarke chaired a major Ballina hunger strike commemoration. This duly occurred in November 1977 when Stagg was reburied beside Gaughan as per his legally-notified wishes. Clarke would not have endeared himself to right-wing elements for his stance on one of the most controversial episodes of the conflict in the jurisdiction. 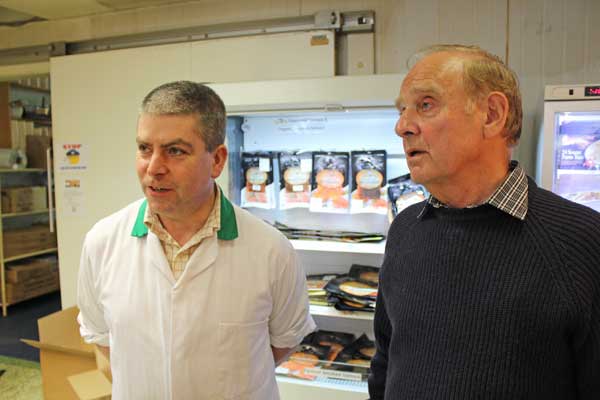 Clarke had a discerning eye for acquiring items of great rarity and fragility and purchased or otherwise gathered much documentation rejected or ignored by national institutions. Constraints of finance no doubt stayed the hand of state institutions at times, although the censorious political climate of the 1970s and 1980s may have encouraged caution. There is no equivalent of the Linen Hall Library’s ‘Troubles’ archive in the national capital despite the obvious attraction of Ireland’s past to international tourists, academics and local citizens. If Clarke had also demurred it must be assumed that very little of the material he secured would re-emerge from the scattered private sector. Fortunately, the basis for optimism is now justified.

The National Library of Ireland’s acquisition of the Seán O’Mahony Papers has improved the general situation vis a vis state ownership of republican-themed documentation, although Clarke’s contains additional material which must remain in Mayo under the terms of the exceptionally generous bequest. Commitment to the future of the region evidently informed this critical stipulation and work is now advanced on bringing it into the public domain.

While it remains unclear exactly what can be viewed and under what circumstances, the long-term survival of the collection is at least now assured. 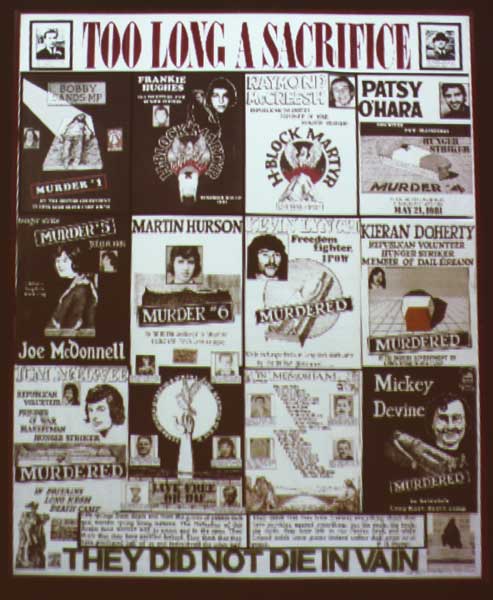 Mayo County Council has made a significant investment in procuring the premises of a decommissioned bank, which has been renovated to accommodate visitors. Fittingly, the new location is down the street from the famed Salmon Smokery where the Clarkes attend to their family business in the former home of the priceless collection. A combination of permanent and temporary displays is currently envisaged for the benefit of casual visitors and the potential for innovative formats remains encouraging.

The material in Ballina falls into several categories which would typically be held in different specialist repositories and museums. This presents logistical and presentational challenges for custodians.

There are great quantities of manuscripts, maps, ephemera, illustrations, newspapers, correspondence, pamphlets, posters, magazines, books and volumes of cuttings dating from the 1940s.

A major constituent, the unique film archive, is separately housed in the Irish Film Institute in Dublin.

A cursory examination of the scope of the collection in Ballina reveals its national importance. 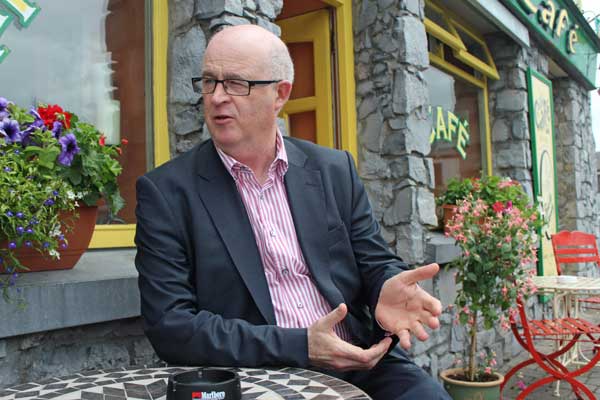 Sinéad McCoole, who has published on Ireland’s 20th century revolutionary period, has spent years organising the trove for viewing. Certain characteristics have now emerged. Clarke prioritised information pertaining to the locality and few, if any, county libraries, can lay claim to a comparable original resource in this respect. The dire period of ‘An Ghorta Mór’ (‘The Great Hunger’), which devastated Mayo more than most counties, is well covered and in a manner that permits detailed analysis of once obscure and grim events. He expanded from regional to national focus and encompassing documentation from the Elizabethan plantations. Earlier and some anomalous later items are also included, perhaps owing to fortuitous availability more than conscious inclusion in a defined collection.

The core of the collection pertains to the 1800s and 1900s, reflecting Clarke’s passionate interest in the development of Irish republicanism. Among the numerous newspaper runs is an almost complete set of An Phoblacht (the organ of the Republican Movement) from the 1920s into the 1980s. The suppression and confiscation of certain editions probably accounts for the occasional missing dates. Many of the numerous posters, proclamations and handbills are probably not merely rare but unique. While the 1916 and 1917 Proclamations are obviously extremely valuable, the fact that they were so many years prior to Clarke’s death eliminates a motive of financial investment. Clearly, the intrinsic social, cultural and political merits of such pieces were his paramount concern and Mayo and the country as a whole are now enriched in consequence.

Many of the most significant artefacts and manuscripts pertain to the history of the Republican Movement. Among the most notable is a letter written by Wolfe Tone in 1798, the year of the Great Rebellion. Clarke also purchased the cockade worn by Tone when disembarked by his British captors in Buncrana, County Donegal, on 3 November 1798. Tone had just taken part in a fierce sea battle on the French Navy’s Hoche, refusing the chance to escape to the Continent on a swift vessel. The collection also contains an autograph book bearing the signatures of numerous members of the First Dáil (January 1919).

Items on the IRA and Sinn Féin cover the bulk of the 20th century and it transpires that his personal curiosity had deepened in the 1940s when the IRA waged the ‘S-Plan’ bombing campaign in England and a sporadic insurgency in the Six Counties. ‘The Long War’, including the 1981 Hunger Strike, is very well surveyed in the Jackie Clarke Collection, a national treasure and living proof that ‘The West’s Awake’.

• An Phoblacht would like to thank Mayo Sinn Féin Councillor Gerry Murray, Michael Fleming, and Sinéad McCoole and Anne Marie Forbes of the Jackie Clarke Collection in Ballina for their time and help.