Reigniting the flame of freedom 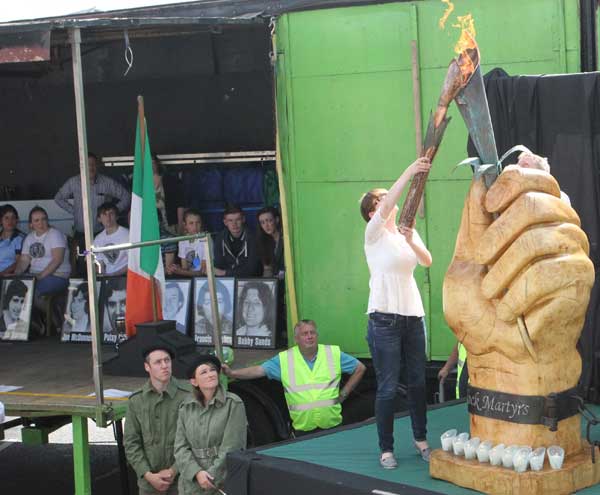 WHO SAYS the uncensored news of An Phoblacht is no longer needed?

In August, one of the largest political demonstrations of the year took place in the town of Monaghan. Thousands of people from all over Ireland and abroad gathered to reaffirm their demand for Irish unity and equality and to pay tribute to the 22 Irish republicans who died on hunger strike in the 20th century. The event was completely ignored by RTÉ and most of the ‘national’ media.

It seems that when summer schools feature ‘the great and the good’ regurgitating the conservative political commentary that proliferates throughout the year, then they are guaranteed media coverage. But even the alleged news shortage of ‘the silly season’ cannot induce the arbiters of current affairs to cover events such as those in Monaghan on the weekend of 2 to 4 August.

I was privileged to take part on the Friday night when the commemorative weekend began with a talk and dramatic re-enactment marking the centenary of the Great Lockout of 1913, and a launch of the book Lockout 1913 – Austerity 2013. The inimitable Jer O’Leary, actor, trade unionist and lifelong socialist republican, gave a reading from James Connolly and his famous portrayal of Jim Larkin, concluding with the exhortation:

“The great are not great. The great only appear great because we are on our knees. Let us arise!”

In my own contribution I stressed James Connolly’s links with County Monaghan, where his parents came from. The first use of the hunger strike for political purposes dates from the 1912-1913 period. In 1912, women protesting for the right to vote were force-fed in Mountjoy Prison. In the following year, Connolly himself and republican feminist Hanna Sheehy Skeffington were on hunger strike in Mountjoy after their arrest during the Lockout and were released after a week.

After recalling the story of the Lockout I pointed out that it has left a legacy of resistance to injustice that endures to this day. We need that fighting spirit to resist the policy of austerity that has brought deeper recession, mass unemployment and emigration. 1913 showed that, with unity and solidarity, ordinary people can bring about huge change.

The spirit of freedom was the theme of the Feargal O’Hanlon Memorial Lecture on the Saturday night, delivered by former Hunger Striker now West Belfast MLA Pat Sheehan. Again, the Monaghan link was strong. Hunger striker Kieran Doherty was elected as TD for Cavan/Monaghan in June 1981 and when he died he was replaced on the fast by Pat Sheehan. 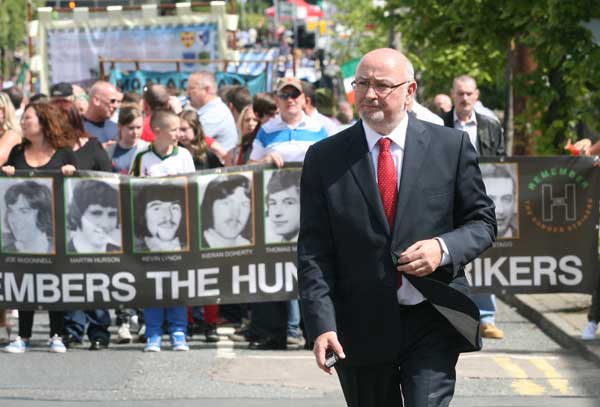 Pat Sheehan said that it was the spirit of freedom and comradeship that sustained him in his time in prison both as a Blanket Man and Hunger Striker and later in a second term in the 1980s. He recalled an occasion in Crumlin Road Jail when he read an article by former Dublin Government Minister Conor Cruise O’Brien:

“In his article, which was written in 1989, he said there was no prospect of Nelson Mandela being released from prison any time soon and that the apartheid regime would be there for another 20 years at least. The Cruiser could not have been more wrong. Mandela was released in 1990 and was President of the new South Africa by 1994.

“So how did this supposed intellectual get it so wrong? Quite simply, he hadn’t factored in the spirit of freedom of the South African people and other freedom-loving people throughout the world. You see, the spirit of freedom isn’t just a desire to be free; it also means acting on that desire, often in a courageous and selfless manner.

“There is a message in that for all of us not to pay much heed to the so-called experts, in particular the ones who tell us we will never see a united Ireland. They just don’t understand the concept of the spirit of freedom.”

That spirit was on display the next day in bright sunshine in Monaghan town as up to 8,000 people gathered for the National Hunger Strike Commemoration. The families of the ten hunger strikers of 1981 were all represented as well as many relatives of hunger strikers from preceding decades. Along the route, all 22 hunger strike martyrs, from Thomas Ashe in 1917 to Mickey Devine in 1981, were portrayed.

The route of the parade was an imaginative journey through the Irish struggle for freedom. Outside the 18th century Market House, Irish pikemen of 1798 confronted English redcoats. 1916 Volunteers stood guard while the Proclamation was read on Market Street. On the North Road, ‘Operation Harvest 1956’ was revisited with freedom fighters stationed in a vehicle used during the period. A replica of a British Army checkpoint with armed British soldiers and young people resisting them brought us back to 1969. 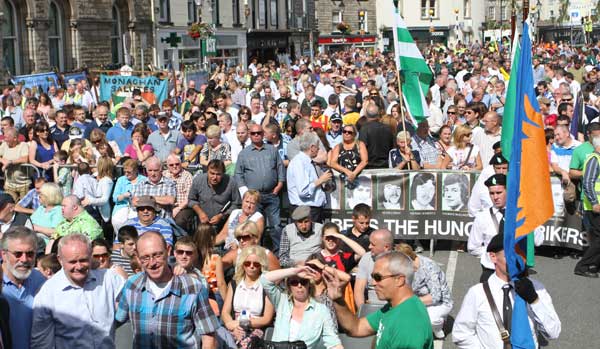 Especially poignant were the re-enactments of the 1981 period with Kieran Doherty election leaflets handed out, a H-Block cell reproduced and a line of ten empty prison hospital beds recalling the agonising months of that tragic year.

The climax of the colourful event was the lighting of ‘The Flame of Freedom’, a large sculpture made by former political prisoners in an intergenerational project co-ordinated by Fáilte Cluain Eois. This ceremony took place in Church Square where the huge crowd gathered for the rally.

The main address was given by Sinn Féin Cavan/Monaghan TD Caoimhghín Ó Caoláin. His conclusion summed up the spirit of the day:

“Today we have symbolically rekindled ‘The Flame of Freedom’. Let us rekindle that flame, that spirit within our hearts and go forward from this place united in our purpose. Let us go from here, together, determined to achieve our republican goals.