There is no good reason not to talk, to stay away from events like this, and John Steele proved that you can step inside a room without having to compromise on your position 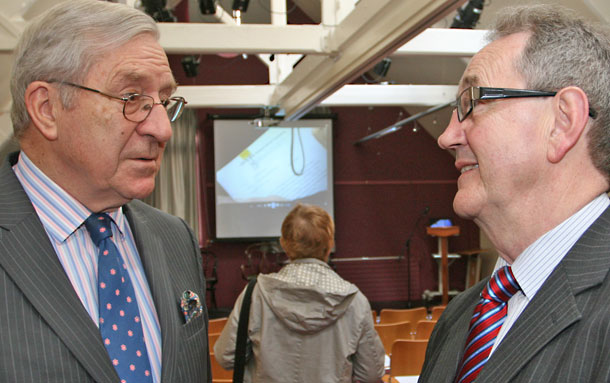 • Former Director of Prisons in the North, John Steele, with Cóiste’s Michael Culbert

The former Controller of Prisons and former Director of Security Policy in the NIO didn’t alter his words or thinking but told it as he wanted to tell it, and he was heard without heckles or interruption

ON the 15th anniversary in May of the Good Friday Agreement referendum, republican ex-prisoners hosted a cross-community conference in the Linen Hall Library in Belfast.

Organised by Coiste na nÍarchimí (the umbrella organisation for republican ex-prisoner self-help groups throughout Ireland), the conference, A Better Friday Agreement, was aimed at assessing the political developments that have occurred since 1998, essentially asking if the Agreement has delivered on its promise.

Speaking to An Phoblacht for the August edition, Séanna Walsh, of Coiste said that there is “a need to take stock of where we are, compared to where we were in 1998, and see what needs to be happen in the future”, adding: “We need to list our problems, name them, and then find ways of resolving them together.”

In an attempt to make the conference as inclusive as possible, political representatives from across the politcal spectrum were invited, as was a wide section of opinion from the community sector. Unfortunately, the main unionist parties failed to show up. Another missed opportunity for the voice of unionism to be heard.

One of those who did take up the invitation was journalist and commentator Brian Rowan.

Writing afterwards for fellow journalist Eamon Mallie’s website, Rowan wrote positively about the conference and the input from those who spoke, including John Steele, former Director of Prisons when the Good Friday Agreement was signed.

In the follow-ups from the conference, Séanna Walsh suggested that An Phoblacht publishes Brian Rowan’s article to try and maintain momentum in the process of political dialogue.

Brian Rowan’s article is reprinted here with his permission and that of eamonnmallie.com

JOHN STEELE didn’t say a lot at the Better Friday Agreement conference, but he said enough to make his point.

In his opening remarks he emphasised the word ‘former’ in his titles – former Controller of Prisons and former Director of Security Policy in the NIO.

He retired in 1998, in the year that is remembered for the political agreement on Good Friday and for another key moment in the journey this place and its people are taking away from war and towards peace.

As the man in charge of the jails he admitted walking the wings of the Maze in a kind of quick step – no hanging around – and on Friday he was telling part of his story to an audience that included loyalists and republicans who had been held in that prison.

In his description of the prisoners he used the word ‘terrorist’, making clear he wouldn’t use the term ‘political’.

As he spoke, I scribbled some of his comments into my notebook, including the following:

“Excuse me using the word terrorist. That’s what I’m used to.”

He had more to say, including that he believed his time in the Prison Service to be the most important in his career.

Steele was invited to Friday’s conference by Séanna Walsh, one of the longest-serving IRA prisoners who now works for the project Coiste na nÍarchimí.

The idea was to look back on the Good Friday Agreement at what has worked but also to think ahead to the next steps.

Steele accepted the invitation; others didn’t, including the Ulster Unionist Party, the DUP and Alliance.

There is no good reason not to talk, to stay away from events like this, and Steele proved that you can step inside a room without having to compromise on your position.

He didn’t alter his words or thinking but told it as he wanted to tell it, and he was heard without heckles or interruption.

The listening audience accepted that this was his take on things – his version of events.

Steele recalled talking to prisoners, described the importance of Home Leave (most importantly that loyalists and republicans returned to the jails) and also the significance of a BBC television documentary Enemies Within (made by Peter Taylor) that showed “the regime wasn’t a problem”.

I asked him about the release of prisoners as part of the Good Friday Agreement and he said this was “essential”.

The only debate at the time was about “all out now or over a period” and Steele knew the former would do serious damage to the referendum vote.

So the argument for phased releases prevailed.

On Friday, John Steele said what he had to say and then left, leaving others to think about his comments and also the power and influence of civil servants.

“[British Prime Minister] Tony Blair was thinking about immediate release,” 1981 IRA Hunger Striker Laurence McKeown told me, “and I think John seemed to imply that it was through his efforts that he dissuaded Tony Blair from that.

“So, I think what it really flagged up was that role of civil servants – the non-elected, non-representative people who have a massive say,” McKeown said.

The speakers on Friday stretched across a wide frame – loyalists Jackie McDonald and William ‘Plum’ Smith, Conall McDevitt of the SDLP, Sinn Féin MLA Alex Maskey, the commentator Roy Garland, Dr Avila Kilmurray (who was a member of the Women’s Coalition at the time of the agreement and is now Director of the Community Foundation), Martin Mansergh (who had a key Dublin role in the developing Peace Process), and republicans Kevin Mulgrew and Féilim Ó hAdhmaill.

Ó hAdhmaill joked about the charismatic qualities of his speaking when in one jail discussion at the time of the agreement he argued against the deal but was on the wrong side of a 48 to 2 vote.

What also needs to be said is that the loyalists who spoke on Friday didn’t tailor their thoughts to suit the occasion or to be popular.

McDonald, still smarting from the flag vote at the City Hall, urged republicans in their decision making to think about the other community and told them there had to be “Orange slices in the Green cake”.

“As a loyalist I’m more confident now than I ever was that Northern Ireland will remain in the United Kingdom.”

Before Friday’s conference, Séanna Walsh had told me that it was time to “list our problems, name them, and then together find ways to resolve them”.

He was setting the context for an event that was a kind of stock-taking exercise – a discussion about the good and the bad since 1998 and what still needs to happen.

Avila Kilmurray summed up the period since the agreement in the words: “Much done, still much to do.”

Of course she is right and, in their contributions, Stormont MLAs Alex Maskey and Conall McDevitt pointed towards the next steps.

McDevitt described an urgent need to agree what is meant by reconciliation, spoke of truth and accountability and, using the recent Cardiff talks as an example, described the importance of independent mediation in helping with difficult conversations.

Maskey talked about flags, parades and the past and how everyone had to play a part in trying to answer the most difficult of questions.

“All parties have to play their role in this. No one has an escape route,” he said.

From the floor, Michael Culbert, a former IRA prisoner and Director of Coiste na nÍarchimí, raised the thorny issues of the Historical Enquiries Team, arrests and prosecutions.

It was a big comment coming at the very end of the conference and it was left hanging but, I suppose, the real question is, would there have been an agreement in 1998 if loyalists and republicans knew what was still around the corner?

Fifteen years on, there is much still to be discussed, and it is always good to talk in whatever room and with whoever is in it.

Brian Rowan is a journalist, author and broadcaster. Four times he has been a category winner in the ‘Northern Ireland Journalist of the Year’ awards. He was BBC Security Editor in Belfast and now contributes regularly to the Belfast Telegraph and UTV. Rowan has reported on the major pre-cessation and then Peace Process events. He is the author of four books.