The Dublin Lockout – On the eve 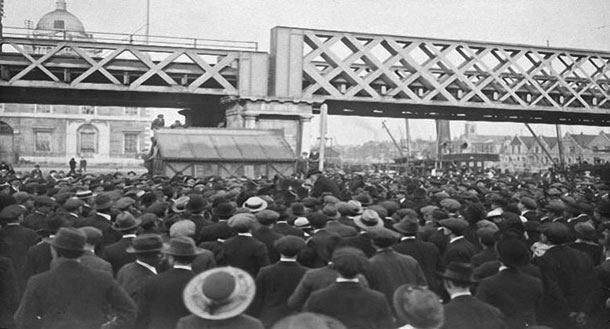 Shall we, who have been carving out for our children a brighter future, a cleaner city, a freer life, consent to betray them instead into the grasp of the blood-suckers from whom we have dreamt of escaping? No, no, and yet again no! Let them declare their lock-out; it will only hasten the day when the working class will lock-out the capitalist class for good and all.

This article was published in The Irish Worker, newspaper of the Irish Transport & General Workers’ Union, on 30 August 1913, at the start of the Great Lockout.

PERHAPS before this issue of The Irish Worker is in the hands of its readers the issues now at stake in Dublin will be brought to a final determination.

All the capitalist newspapers of Friday last join in urging, or giving favourable publicity to, the views of others urging the employers of Dublin to join in a general lockout of the members of the Irish Transport and General Workers’ Union. It is as well. Possibly some such act is necessary in order to make that portion of the working class which still halts undecided to understand dearly what it is that lies behind the tyrannical and brow-beating attitude of the proprietors of the Dublin tramway system.

The fault of the Irish Transport and General Workers’ Union!

What is it? Let us tell it in plain language. Its fault is this: that it found the labourers of Ireland on their knees and has striven to raise them to the erect position of manhood; it found them with all the vices of slavery in their souls, and it strove to eradicate these vices and replace them with some of the virtues of free men; it found them with no other weapons of defence than the arts of the liar, the lickspittle, and the toady, and it combined them and taught them to abhor those arts and rely proudly on the defensive power of combination; it, in short, found a class in whom seven centuries of social outlawry had added fresh degradations upon the burden it bore as the members of a nation suffering from the cumulative effects of seven centuries of national bondage, and out of this class, the degraded slaves of slaves more degraded still – for what degradation is more abysmal than that of those who prostitute their manhood on the altar of profit-mongering? – out of this class of slaves the labourers of Dublin, the Irish Transport and General Workers’ Union has created an army of intelligent self-reliant men, abhorring the old arts of the toady, the lickspittle, and the crawler and trusting alone to the disciplined use of their power to labour or to withdraw their labour to assert and maintain their right as men. 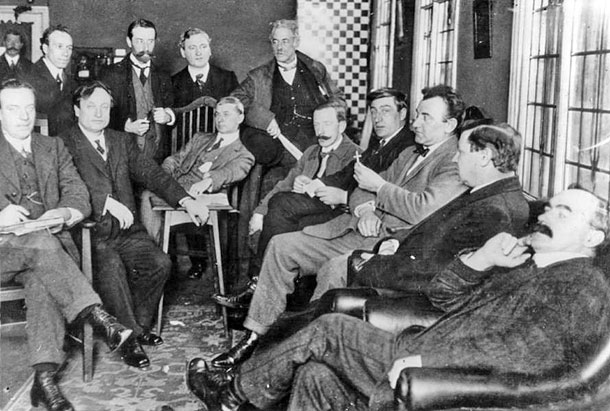 The master class, kings and lords

To put it in other words, but words as pregnant with truth and meaning: the Irish Transport and General Workers’ Union found that before its advent the working class of Dublin had been taught by all the educational agencies of the country, by all the social influences of their masters, that this world was created for the special benefit of the various sections of the master class, that kings and lords and capitalists were of value; that even flunkeys, toadies, lickspittle and poodle dogs had an honoured place in the scheme of the universe, but that there was neither honour, credit, nor consideration to the man or woman who toils to maintain them all.

Against all this, the Irish Transport and General Workers’ Union has taught that they who toil are the only ones that do matter, that all others are but beggars upon the bounty of those who work with hand or brain, and that this superiority of social value can at any time be realised, be translated into actual fact, by the combination of the labouring class. 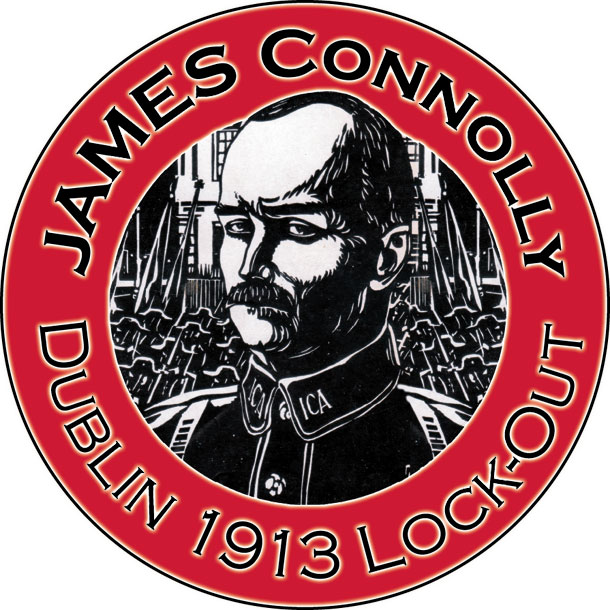 Preaching, organising and fighting upon this basis, the Irish Transport and General Workers’ Union has done what?

If the value of a city is to be found in the development of self-respect and high conception of social responsibilities among a people, then the Irish Transport and General Workers’ Union found Dublin the poorest city in these countries by reason of its lack of these qualities. And by imbuing the workers with them, it has made Dublin the richest city in Europe today, rich by all that counts for greatness in the history of nations. It is then upon this working class so enslaved, this working class so led and so enriched with moral purposes and high aims that the employers propose to make general war. Shall we shrink from it; cower before their onset? A thousand times ‘No!’.

Shall we crawl back into our slums, abase our hearts, bow our knees, and crawl once more to lick the hand that would smite us? Shall we, who have been carving out for our children a brighter future, a cleaner city, a freer life, consent to betray them instead into the grasp of the blood-suckers from whom we have dreamt of escaping? No, no, and yet again no! Let them declare their lockout; it will only hasten the day when the working class will lock out the capitalist class for good and all.

If for taking the side of the tram men we are threatened with suffering, why we have suffered before. But let them understand well that once they start that ball rolling no capitalist power on earth can prevent it continuing to roll, that every day will add to the impetus it will give to the working class purpose, to the thousands it will bring to the working class ranks and every added suffering inflicted upon the workers will be a fresh obstacle in the way of moderation when the day of final settlement arrives.