Government cuts on Travellers are neither fair or equitable 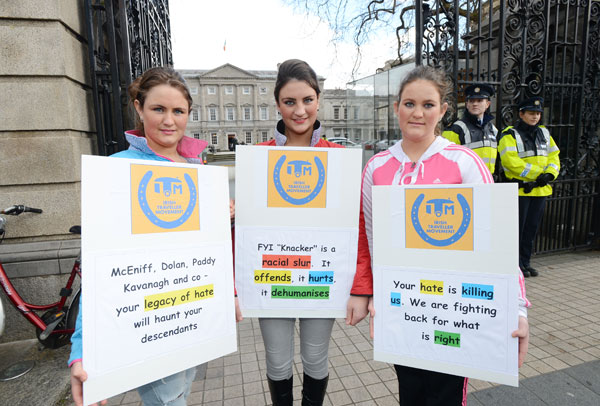 After experiencing five years of austerity policies, one would expect that we in the community sector could no longer be shocked by any new information on cuts. However, we were both disappointed and shocked at the research findings and their implications.

PAVEE POINT recently launched a report, ‘Travelling with Austerity’, which documents the cuts to Travellers, Traveller projects and services since 2008. The report was commissioned because we had concerns about the impact of austerity on Travellers and on Traveller community development projects.

Anecdotally, we had a sense of huge cuts and their cumulative negative impacts on work with Travellers but we needed concrete evidence to see if our perceptions were accurate.

We commissioned the independent social researcher, Brian Harvey, to undertake this work on our behalf as we felt it would give more credibility to the research findings.

Over the past 30 years, a variety of independent local and regional Traveller initiatives and national Traveller organisations have used community work approaches and methods in our work for justice, equality and human rights with Travellers. It is this work, and the painstaking collective progress it has been possible to make through it, which is now threatened by austerity measures which have led to a dramatic disinvestment by the state in the Traveller community since 2008 documented in this research report.

These cuts, combined with a vicious and increasingly institutional backlash (apparent in recent comments by politicians and judges), are having significant and negative impacts for Travellers. 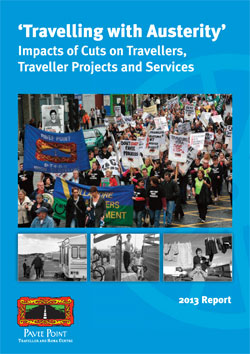 Against that backdrop this report sets out to examine the value of community development work with Travellers and record again the achievements of Traveller organisations.

The report also documents the cuts to the anti-racism, equality and human rights agencies which would previously have been available to support Travellers and Traveller organisations in working to attain their human rights.

The closing down of the National Consultative Committee on Racism and Interculturalism (NCCRI) and the ending of the National Action Plan Against Racism in 2008 has meant that Travellers are no longer automatically included in anti-racism and intercultural initiatives, which leaves them even further marginalised.

After experiencing five years of austerity policies, one would expect that we in the community sector could no longer be shocked by any new information on cuts. However, we were both disappointed and shocked at the research findings and their implications.

The cuts (which are documented using the Government’s own figures) need to be seen in the context of overall Government cuts in gross expenditure on current services, which decreased by 4.3%. However, this is in marked contrast to the scale of the cuts experienced by programmes for Travellers and programmes and funding lines of importance to Travellers. Our research documents the following cuts to Traveller services since 2008:

The report also highlights significant underspends by Government departments in the reduced budgets that are allocated. Given the level of need within the Traveller community, and Government commitments to ‘fairness’, it is hard to justify such cuts.

One can think of no other section of the community which has suffered such a high level of withdrawal of funding and human resources, compounded by the failure of the state to spend even the limited resources that it has made available.’

Pavee Point has concerns with the Government plan for local government reform, ‘Putting People First’, and the attendant alignment policy whereby it is intended that the community sector, including the Traveller sector, will be subsumed into local authorities. Travellers and Traveller organisations do not have confidence in local authorities to defend Travellers’ interests given their track records and failure to deliver Traveller accommodation programmes, as illustrated in our research. We are fearful that ‘Putting People First’ will actually mean ‘Putting Settled People First’ and this cannot be allowed to happen. 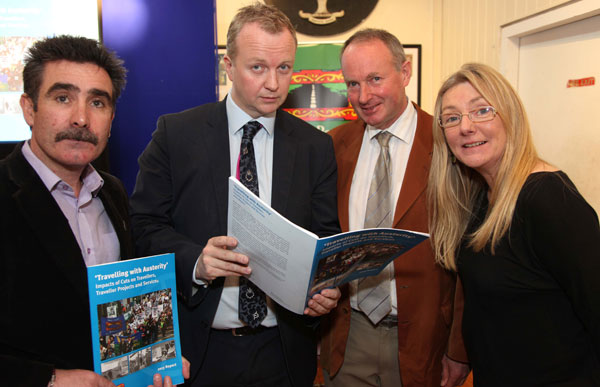 • Co-Director of Pavee Point Martin Collins, journalist and broadcaster Matt Cooper, researcher and report author Brian Harvey and Siobhán McLaughlin of the Donegal Travellers Project at the launch of the Pavee Point report ‘Travelling with Austerity - Impacts of Cuts on Travellers, Traveller Projects and Services’Photo by Derek Speirs

We call on the Government to:-