Game, set and match to the banks 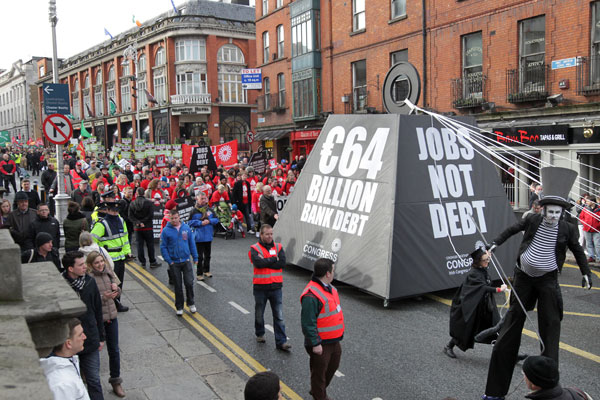 It was Government, fully aided and abetted by Opposition politicians of the day, who allowed land prices escalate beyond anything that could be considered reasonable and allowed the price of houses rise to the point where the cost of production bore no resemblance to the sale value

WELL, Frankfurt’s way is Labour’s way! Leo Varadkar’s ‘not a cent more’ to Anglo Irish Bank became €34billion and all bond holders have been paid with our Taoiseach proudly announcing after his election that Ireland would pay every red cent of its debt. But nothing shows the extent to which banks are running Ireland and Europe more than the recently-published ‘Insolvency Guidelines and Rules’ which were launched in April.

The Irish banks were recapitalised and their bad loans were taken from them into the hands of NAMA, which is paid for by workers and other taxpayers. They received further recapitalisation funds in respect of anticipated mortgage defaults of up to 30% of mortgage holders and there is no significant evidence that they have accepted a writedown of any mortgages as a result.

Instead, the Irish banks (and their highly-paid executives) have skilfully managed to shift the burden of their debt onto the state and the general public. They have avoided the impact of austerity which has largely fallen on those who are dependent on welfare and public servants. However, their biggest coup of all was the hardball they played with Government which now allows them dictate the level of penury imposed on a generation whom they, the politicians and the developers, convinced to incur debt on the basis of ‘you must get onto the property ladder’.

It was Government, fully aided and abetted by Opposition politicians of the day, who allowed land prices escalate beyond anything that could be considered reasonable and allowed the price of houses rise to the point where the cost of production bore no resemblance to the sale value. The current government have now created a ‘PIP’ (Personal Insolvency Provider) whom, they say, will advocate on behalf of the debtor (mortgage holder) against the big bad banks. The reality of this is that they have created a middle man who will charge the debtor for any assistance provided and who, in the way of these things, will ultimately become practitioners or businesses that have a more familiar relationship with the banks than any individual client whom they deal with. Criminals facing the court are entitled to free legal aid but unfortunate mortgage holders, the victims of an overheated economy for which they hold no responsibility, will have to pay for their representation in the insolvency process. 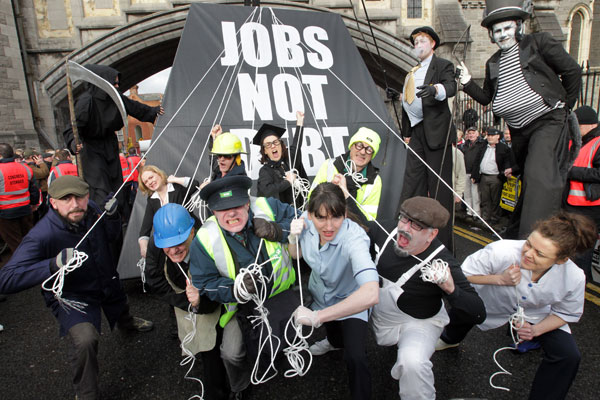 The Irish Nurses and Midwives Organisation two years ago successfully promoted a resolution to the Irish Congress of Trade Unions which would have sought a fairer resolution for the generation of mortgage holders whose principal private residence was overvalued to the extent that they are now in negative equity.

The motion sought, among other things, that the capital amount would be written down to the current value of the principal private residence, very similar to the scheme which has operated successfully in Iceland. The Icelandic Government were prepared to force their banks to burden their share of their reckless lending. Although passed at the ICTU conference and adopted as policy of the ICTU, it never featured in any pre-Budget submission or economic analysis presented by the ICTU. But that is another matter which is not untypical of the tyranny of consensus which imposed silence on even the largest civic society organisation in Ireland.

But alas we have become used to the idea that the first casualty nowadays of politics is the truth. You can almost be guaranteed that if a Government minister or spokesperson says something is fair it will be inherently unfair. Such was the case with the proposals promoted under the Croke Park Extension which, when reviewed independently by an equality expert, were deemed to be discriminatory and inequitable. Likewise, the sight of two Government ministers promoting the notion of tax concessions at the same time as Minister Howlin was trying to take €3,000 out of the pocket of the vast majority of nurses and midwives is yet another example that nothing has changed in spite of the huge promise that we would never return to auction politics.

The insolvency debacle and the mortgage problem which is still the biggest problem facing citizens in Ireland, along with the sustained attack on public service workers, are huge disappointments to anybody who voted for new politics when they voted in this government.

Regrettably, this government, to an even greater extent than its predecessors, have debased politics and have further alienated working people and those who contribute most in our society. The recent massive rejection of the Croke Park Extension proposals was the first opportunity that any significant body of Irish people outside of the Irish election got the opportunity to say ‘No’. The resounding ‘No’ by approximately 70% of the entire public service should not be ignored. If it is, then the time has surely come for a full confrontation with politicians who ignore the people and believe that they know better.