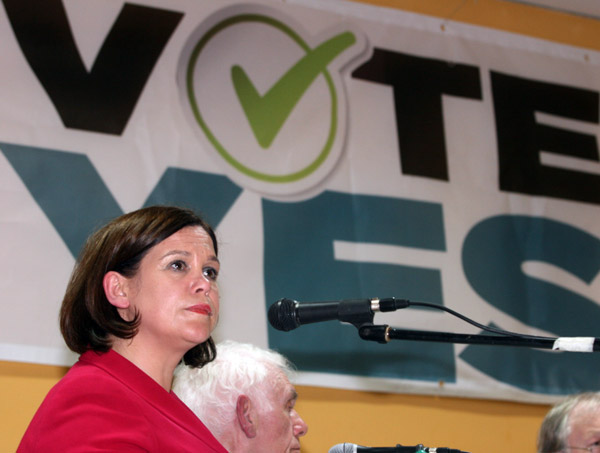 THE Crossmaglen Rangers club was buzzing when upwards of 200 people packed the debate on a United Ireland chaired by Eamonn Mallie and addressed by unionists as well as republicans ahead of the people’s Border poll.

The debate (organised by ‘United Ireland – You Decide: A People’s Referendum’) was lively, interesting and had plenty of contributors from the audience.

And to his credit, Mallie (a native of South Armagh) kept a tight rein on the panellists – Sinn Féin’s Mary Lou McDonald, unionist commentator Roy Garland, economist Conor Patterson and Fine Gael Senator Jim D’Arcy – and ensured there was as much audience participation as possible.

And while it shouldn’t be a great surprise that the overwhelming view of the audience was in favour of a united Ireland, the discussion did, as local MP Conor Murphy said “throw up a variety of views”.

For his part, Roy Garland, unfortunately the only unionist representative on the panel given that other unionist elected politicians spurned the chance to make their case against reunification, stated that unionists couldn’t be convinced of a united Ireland.

Garland believes that the best way to make progress is to “make Northern Ireland work”.

He said that people will see an Irish dimension and, on that basis, cross-Border (all-Ireland) relations will improve.

Garland spoke of his alienation when he first travelled to the 26 Counties and he cited the Irish language and Catholic statues as examples of his alienation. It was as if he was focusing on this notion of ‘a Catholic country for a Catholic people’ and this would be the model for a united Ireland.

It was a view countered very strongly by a number of speakers from the audience and Mary Lou McDonald TD, who stated emphatically that the republican project isn’t about assimilation.

“Who,” she asked, “would support the notion of a state dedicated to one form of religious dogma?

“We want the Republic,” the Sinn Féin TD insisted, “as partition has been divisive. And it is instrumental in slowing down and retarding social and economic development right across the country.

“It makes no sense to have two of everything: two health systems and two education systems, for example.”

Economist Conor Patterson made the interesting observation that the real opposition to a united Ireland lies in Banbridge, Hillsborough and Carrickfergus. These areas of unionist affluence populated by “high-paid public officials who live off the British state are in the real dependent relationship with Britain”, he said.

Fine Gael Senator Jim D’Arcy asserted there is “support for a united Ireland in principle” and also said that he is in favour of a unitary state while also disparaging the idea that assimilating the North into the 26 Counties was an option.

He added he would support moves to allow Northern voters to take part in elections for the President of Ireland.

A PEOPLE’S REFERENDUM is an initiative to begin the debate about Irish unity at a grassroots level and to raise awareness of the provision for a Border Poll in the Good Friday Agreement.

Under the Good Friday Agreement, the British Secretary of State has the power to make an order to direct the holding of a poll on Irish reunification.