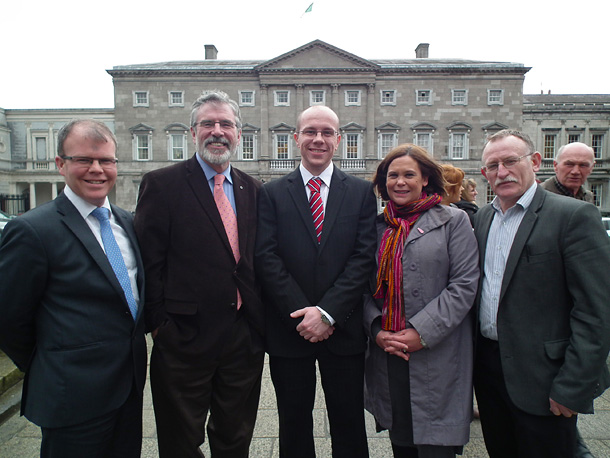 NATIONAL HEALTH policy adviser Darren O’Rourke has been selected by Sinn Féin to contest the Meath East by-election in the first real test for the Fine Gael and Labour Government since 2011.

The poll follows the death by suicide of local TD and Fine Gael Minister of State Shane McEntee.

Darren (32), originally from Kells but now living in Ashbourne, previously worked as a medical scientist at Our Lady of Lourdes Hospital in Drogheda before taking up his role as an adviser to Sinn Féin Health spokesperson Caoimhghín Ó Caoláin TD. He has also served as the National Chairperson of Sinn Féin Republican Youth as well as an organiser for the party. He is a keen amateur boxer and athlete, running the Dublin City Marathon to raise funds for Ashbourne Boxing Club.

At a packed selection convention in the Headford Hotel, Kells, Darren said he and Sinn Féin strongly believe in ‘An Ireland of Equals’:

“Sinn Féin is the only party - and I mean the only party – that has a vision and a plan to create a better Ireland for all of our people. This has always been my opinion but since I started working in Leinster House it has become even more apparent to me.

“The fundamental difference between Sinn Féin and all the other parties – Fianna Fáil, Fine Gael and Labour– is that we want to create change. Change is what we are about, change for the better and change for everyone. For Fianna Fáil and Labour it’s all about position and power.”

“Darren is the strongest and best candidate in the field and he will bring the message to the people of Meath East that there is an alternative, that there is another way, there is hope, and that rests in Sinn Féin.”

As we go to print, the Government has not moved the writ to set a date for the Meath East by-election, which has to be held by June.