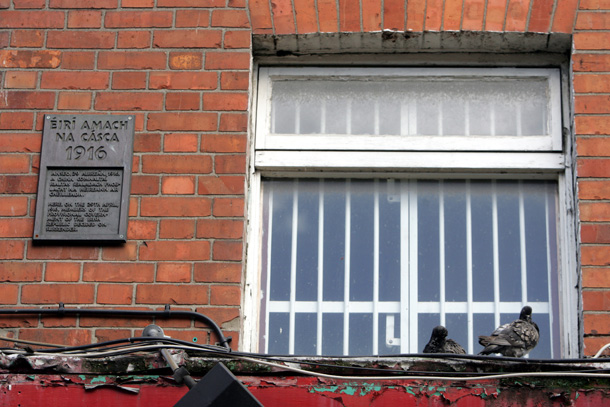 It’s especially moving to stand in the room in Number 16, where the Provisional Government held its last meeting around the bed of the gravely wounded James Connolly

As a member of the committee, it was a moving experience for me to see the inside of these buildings for the first time. It was especially moving to stand in the room in Number 16, where the Provisional Government held its last meeting around the bed of the gravely wounded James Connolly. Present also were PH Pearse, Tom Clarke, Seán Mac Diarmada, Joseph Plunkett and Willie Pearse, all executed by the British within a few days of the surrender which was decided on in this very room.

The developer Chartered Land owns these buildings, as well as most of that side of Moore Street, the lanes and buildings behind it and part of Upper O’Connell Street. Their plan is to build a giant shopping centre, demolishing most of Moore Street on either side of Numbers 14 to 17, which would be dominated and overlooked by high buildings.

Our tour allowed us to see the full extent of what would be lost, as well as what (according to the developer) would be preserved. Scores of public submissions have been received by the Moore Street Advisory Committee, the vast bulk of them opposed to the developer’s plan.

It is my view (and that of Sinn Féin, which also made a party submission) that not only is this the wrong plan, because it will partly destroy and overwhelm the National Monument, but we are now told by Chartered Land that this plan is subject to change by them if the Minister for Arts, Heritage and the Gaeltacht, Jimmy Deenihan, signs off on it.

Because 14 to 17 Moore Street is a National Monument, work on or around it requires the consent of Minister Deenihan. This is still on the Heritage Minister’s desk. But if he signs off on the current plan is he signing off on the final plan by Chartered Land? Not according to the company itself, which has now changed the plan – or at least it claims that it will make changes. But if Minister Deenihan gives them the go-ahead then there is no guarantee that they will make any such changes.

In the end of the day, the Chartered Land plan, while preserving most of the actual buildings, will destroy 60% of the site of the National Monument, demolish most of that side of Moore Street and overwhelm this historic part of our city with a giant shopping centre. The Heritage Minister should refuse consent.

See the pictures from inside »