Scotland: Impacting on the narrative of sectarianism 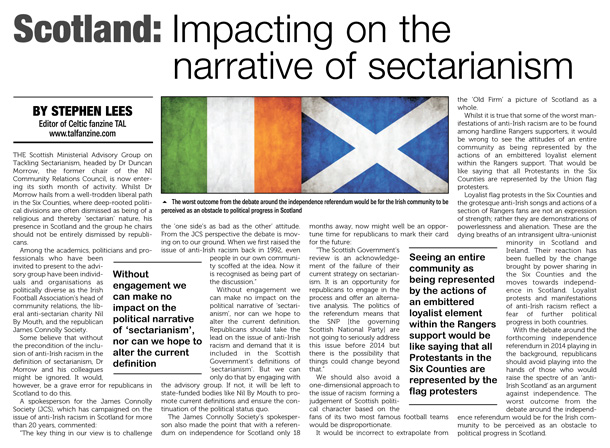 THE Scottish Ministerial Advisory Group on Tackling Sectarianism, headed by Dr Duncan Morrow, the former chair of the NI Community Relations Council, is now entering its sixth month of activity. Whilst Dr Morrow hails from a well-trodden liberal path in the Six Counties, where deep-rooted political divisions are often dismissed as being of a religious and thereby ‘sectarian’ nature, his presence in Scotland and the group he chairs should not be entirely dismissed by republicans.

Among the academics, politicians and professionals who have been invited to present to the advisory group have been individuals and organisations as politically diverse as the Irish Football Association’s head of community relations, the liberal anti-sectarian charity Nil By Mouth, and the republican James Connolly Society.

Some believe that without the precondition of the inclusion of anti-Irish racism in the definition of sectarianism, Dr Morrow and his colleagues might be ignored. It would, however, be a grave error for republicans in Scotland to do this.

A spokesperson for the James Connolly Society (JCS), which has campaigned on the issue of anti-Irish racism in Scotland for more than 20 years, commented:

“The key thing in our view is to challenge the ‘one side’s as bad as the other’ attitude. From the JCS perspective the debate is moving on to our ground. When we first raised the issue of anti-Irish racism back in 1992, even people in our own community scoffed at the idea. Now it is recognised as being part of the discussion.”

Without engagement we can make no impact on the political narrative of ‘sectarianism’, nor can we hope to alter the current definition. Republicans should take the lead on the issue of anti-Irish racism and demand that it is included in the Scottish Government’s definitions of ‘sectarianism’. But we can only do that by engaging with the advisory group. If not, it will be left to state-funded bodies like Nil By Mouth to promote current definitions and ensure the continuation of the political status quo.

The James Connolly Society’s spokesperson also made the point that with a referendum on independence for Scotland only 18 months away, now might well be an opportune time for republicans to mark their card for the future:

“The Scottish Government’s review is an acknowledgement of the failure of their current strategy on sectarianism. It is an opportunity for republicans to engage in the process and offer an alternative analysis. The politics of the referendum means that the SNP [the governing Scottish National Party] are not going to seriously address this issue before 2014 but there is the possibility that things could change beyond that.”

We should also avoid a one-dimensional approach to the issue of racism  forming a judgement of Scottish political character based on the fans of its two most famous football teams would be disproportionate.

It would be incorrect to extrapolate from the ‘Old Firm’ a picture of Scotland as a whole.

Whilst it is true that some of the worst manifestations of anti-Irish racism are to be found among hardline Rangers supporters, it would be wrong to see the attitudes of an entire community as being represented by the actions of an embittered loyalist element within the Rangers support. That would be like saying that all Protestants in the Six Counties are represented by the Union flag protesters.

Loyalist flag protests in the Six Counties and the grotesque anti-Irish songs and actions of a section of Rangers fans are not an expression of strength; rather they are demonstrations of powerlessness and alienation. These are the dying breaths of an intransigent ultra-unionist minority in Scotland and Ireland. Their reaction has been fuelled by the change brought by power sharing in the Six Counties and the moves towards independence in Scotland. Loyalist protests and manifestations of anti-Irish racism reflect a fear of further political progress in both countries.