A traumatic time, a time of bravery and courage 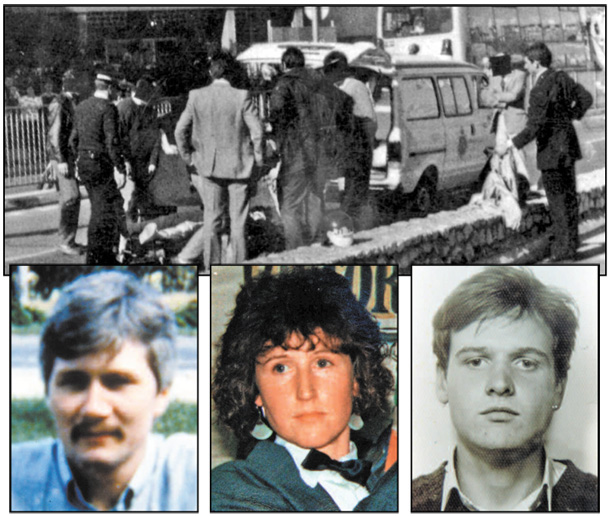 • The bodies of the Volunteers are removed from the scene of the shooting; IRA Volunteers Dan McCann, Mairéad Farrell and Seán Savage

In the winter of bondage we saw a vision... The vision became a reality, Winter became summer, Bondage became freedom, And this we left to you as your inheritance. O generation of freedom remember us, The generation of the vision

6 March 1988: Three IRA Volunteers – Mairéad Farrell, Seán Savage and Dan McCann – were gunned down in broad daylight by the British Army’s elite SAS. They became the latest victims of the unofficial British policy of the time – shoot to kill. They were unarmed. They were heavily outnumbered and surrounded by the SAS and numerous police and security units. They never had a chance.

The killings in Gibraltar were to trigger a tragic series of events that was to claim many more lives.

It was a traumatic time but also a time of bravery, courage and republican resilience.

ON Saturday 16 March, republicans come together at the Republican Plot in Milltown Cemetery in Belfast to remember those killed by British state forces during March 1988.

Seven republicans lost their lives in an onslaught that began with the execution of Volunteers Mairéad Farrell, Dan McCann and Seán Savage in Gibraltar on Sunday 6 March.

Volunteer Kevin McCracken was the next to die. The former H-Blocks Blanketman was shot dead on 14 March by the British Army in his native Turf Lodge. He was about to engage British forces laying siege to the Savage family home and harassing visitors to the house.

Then, on 16 March, as the Gibraltar Martyrs were being carried to their final resting place, a barrage of gunfire and exploding grenades cut through the silent air at the solemn, graveside ceremony as thousands of mourners gathered to pay their respects.

Commemoration events, such as this month’s events around Gibraltar, are important for republicans.

We not only remember people who were our comrades and friends, we stand in solidarity with their families and give them our support. Most of all, however, we celebrate the lives of people who were motivated by the ideals and the vision of an Ireland free from British rule, an Ireland that will cherish all the children of the nation equally.

In 1976, Liam Mac Uistin’s poem, We Saw A Vision, was written to express the appreciation and inspiration of the struggle for Irish freedom.

It is inscribed on the monument in the Garden of Remembrance in Parnell Square, Dublin.

The poem talks of how despair was turned to hope, of how we planted the tree of valour.

In the winter of bondage we saw a vision...

The vision became a reality,

And this we left to you as your inheritance.

O generation of freedom remember us,

The generation of the vision

Our patriot dead are ‘The Generation of the Vision’ and we remember them.

The killings in Gibraltar

When the news broke through on Sunday evening of 6 March 1988 that three IRA Volunteers had been killed on active service in the British colony of Gibraltar, the British propaganda machine went into overdrive.

The British Government agencies and British media churned out a version of events that was totally at odds with reality.

Mairéad Farrell, Dan McCann and Seán Savage were unarmed when ambushed and gunned down by the SAS. There was no gun battle as the British initially claimed. Nor were the trio in possession of, or in control of, a bomb, as also alleged by the British Government.

In the hours before the ambush, 12 SAS highly-trained assassins were flown to Gibraltar with the specific task of targeting and killing the three Volunteers.

The British Government of Prime Minister Margaret Thatcher, who had come close to being assassinated by the IRA in Brighton in 1984, was determined to wipe out the three republicans rather than arrest them. Thatcher had taken a political decision aimed at striking both a military and psychological blow against the IRA. It was designed to demoralise republicans. It failed.

Thatcher obviously did not learn anything about republican resistance and resilience from the battle over political status in the H Blocks and Armagh Women’s Prison. 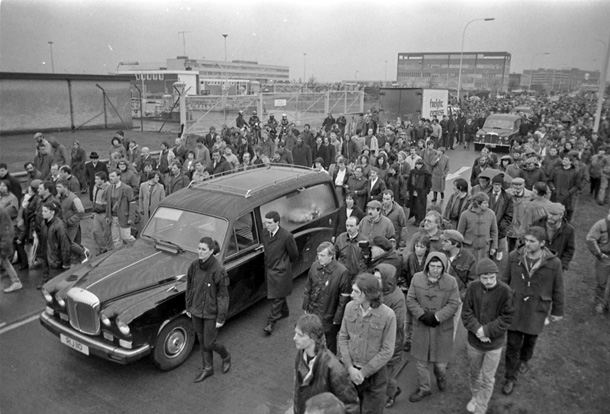 Belfast republican Joe Austin was given power of attorney and flew to Gibraltar to bring the bodies home.

All along the journey from Dublin Airport to the Border, thousands upon thousands of people came out on to the streets of Balbriggan, Drogheda, Dunleer and Castlebellingham with black flags and held vigils. It took the funeral procession an hour and a half to get through Dundalk such was the crowd.

By contrast, when the cortege travelled close to strong unionist areas in the North, baying loyalist mobs attacked the hearses.

The RUC played its part by harassing mourners at the Border and demanding that the national flags be removed from the coffins. They also drove their armoured Land Rovers into cars in the procession and rammed the hearses.

At Lisburn, County Antrim, the RUC hijacked the hearses carrying the remains, taking them on a circuitous route to Belfast so as to avoid the emotional homecoming from the upwards of 6,000 people who maintained a dignified vigil at Kennedy Way since 5pm that day.

Their dignity was in stark contrast to the behaviour of one senior RUC officer who spat on the hearse carrying Dan McCann’s remains. They feared him life and hated him in death. 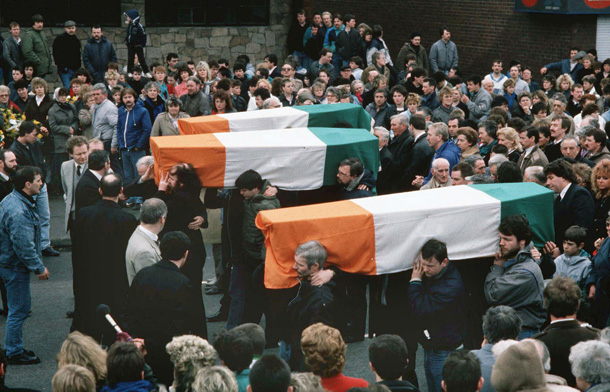 It was against this backdrop that Volunteer Kevin McCracken was shot dead.

He was shot dead in Turf Lodge by the British Army as he prepared to launch an attack on British forces that had saturated the area in an attempt to intimidate Seán Savage’s family who lived nearby.

A former Blanketman, Kevin was a highly committed republican who possessed a defiance that saw him leave the H-Blocks unbroken and unbowed.

He died as he had lived: fighting for his friends and comrades. 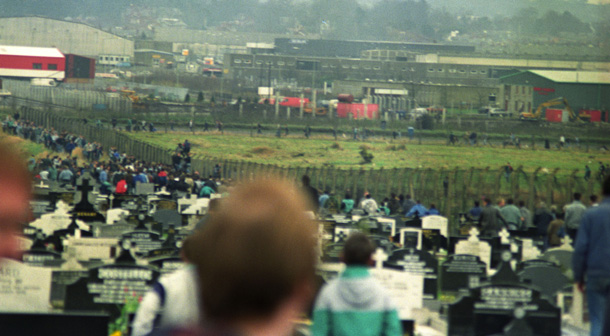 The usually oppressive British Army/RUC presence at republican funerals was absent on 16 March as the remains of the Gibraltar Three were carried through west Belfast.

The suspicion that ‘something was wrong’ was proven as UDA man Michael Stone lobbed his grenades into the unsuspecting mourners.

Under the close observation of British Army helicopters and various other vantage points occupied by the crown forces, Stone carried out his assault which continued for 15 minutes.

Had it not been for the courage of Thomas McErlean, John Murray and Volunteer Caoimhín Mac Brádaigh, who died, and many others who confronted Stone, the death toll would have been heavier.

Stone ran in the direction of a white van, parked on the hard shoulder of the Westlink. The RUC were later forced to admit that this was one of their vehicles.

The mystery of this van, the absence of the customary heavy crown forces presence at the funerals and the sudden appearance of a ‘loyalist loner’ heavily armed with weapons smuggled in to Ireland from apartheid South Africa under the watchful eye of British Army Intelligence and MI5 points to official British collusion in the attack. 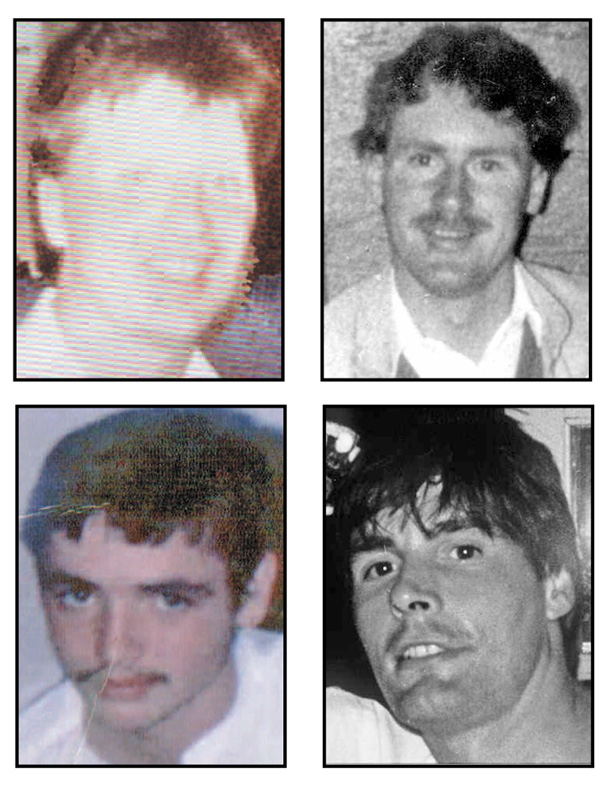 The funeral of Caoimhín Mac Brádaigh and ‘The Corporals’

That Volunteer Caoimhín Mac Brádaigh’s funeral became a battleground on Saturday 19 March and resulted in the deaths of two undercover British soldiers, armed and in civilian clothes, was the responsibility of those who sent them out that day.

The two corporals ignored the warnings of stewards as their car drove towards the funeral cortege. They could have turned off into a side street or do a U-turn and go back the way they’d come but, instead, the driver accelerated at high speed and mounted a footpath, narrowly missing several of those who had gathered to line the route.

The car then quickly reversed but was cut off by several black taxis at the head of the cortege.

Believing they were again under attack by unionist paramilitaries like Michael Stone, men began to surround the vehicle. One of the occupants produced a handgun and fired. The crowd pulled back for a second before fearlessly attacking the car again. Both occupants were dragged out of the vehicle. The IRA arrived on the scene and took custody of both men. The IRA, determining that the two were British soldiers in civilian clothing, subsequently executed them.

The British media pilloried the people who instinctively reacted to defend another funeral from what they reasonably believed to be another loyalist attack, given the soldiers’ actions and weapons. The British Secretary of State at the time, Peter Brooke, branded them “a terrorist community”.

A quarter of a century has passed since 1988, a lifetime, but we still remember with pride those who gave their lives in our generation, ‘The generation of the Vision.’

The 25th anniversary of the Gibraltar killings commemorative events

Remembering the republican dead of Gibraltar, Turf Lodge and Milltown 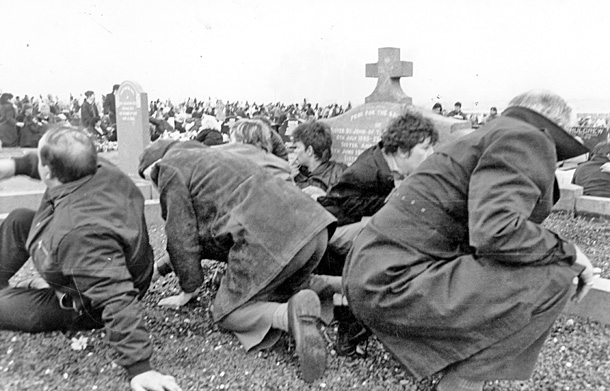