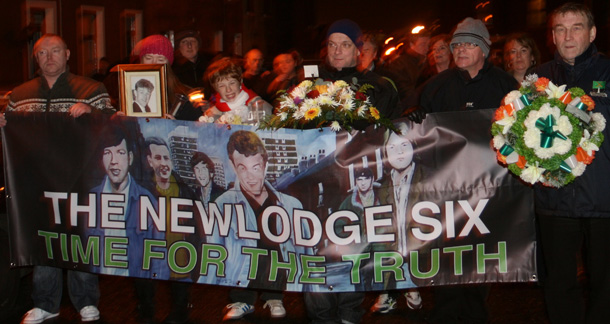 ‘With over 100 lives lost by a combination of loyalist and British state forces, the greater New Lodge experience speaks of state execution and naked sectarian killings over a 35-year period’ – Relatives for Justice

THE sense of anger and injustice felt by the New Lodge community at the killings in February 1973 of James McCann, James Sloan, Tony Campbell, Brendan Maguire, John Loughran and Ambrose Hardy (a seventh man, Charlie Carson, was severely wounded) by the British Army and its loyalist agents was evident in the huge turnout at the candlelight vigil to mark their anniversary on Sunday 3 February. Hundreds of people, young and old, came out on a bitterly cold night to not only remember the New Lodge Six but to show solidarity with their families and send a message to the British Establishment that, despite the 40-year gap, the injustice of that night has not been forgotten.

Four of the dead were shot by soldiers from the tower blocks once known as Artillery Flats in the tradition of the British Army. Since renamed by the community after Meabh and Eithne, the procession gathered in the shadow of these towers.

As the crowd wound its way through the district to the top of the New Lodge Road, those who couldn’t join the march stood on their doorsteps with torches or lighted candles.

At the junction of the Antrim Road and New Lodge Road, where Jim McCann and Jim Sloan were shot from a passing car, the first of two plaques was unveiled.

The Sinn Féin politician reminded people how the British Army had used their new infra-red night-sights to target and kill men they labelled gunmen but who were unarmed. And just like the killings carried out in Ballymurphy in August 1971, in Derry on Bloody Sunday, and Springhill in 1972, the British had covered them in “a tissue of lies”.

She told the crowd that the British Army and the British Government would someday be held accountable for the killings.

The British version of events follows a well-established narrative and one that nationalist communities in the North are familiar with.

The crown forces, out of uniform and in uniform, gunned down six unarmed men. They released statements to the press that accepted, without question, what the British state told them: that there was a gun battle raging with the IRA and those who died were armed when shot.

The press actually became complicit in the cover-up as they refused to give any weight or credence to the eyewitness stories of those in the area who actually saw the shootings.

The story of the New Lodge Six began when Jim McCann and Jim Sloan, two IRA Volunteers, were gunned down from a passing car as they left Lynch’s Bar at the corner of the New Lodge and Antrim roads at about 11:30pm.

The car travelled along the Antrim Road, fired into a Chinese restaurant, did a U-turn in sight of a British Army sangar at Girdwood Barracks before driving back towards Halliday’s Road past a British Army armoured car and escaping into Tiger’s Bay.

Locals believe the car’s occupants were British military personnel rather than loyalists.

Within half an hour of the attack, as people came on to the streets, the British Army opened fire without provocation from their positions on the high-rise flats.

Four men, including IRA Volunteer Tony Campbell, were to die at Edlingham Street.

The others were John Loughran, Brendan Maguire and Ambrose Hardy.

In a publication released by Relatives for Justice to mark the 40th anniversary of the killings, family and friends of the dead stated “with over 100 lives lost by a combination of loyalist and British state forces, the greater New Lodge experience speaks of state execution and naked sectarian killings over a 35-year period”.

This started with the death of Patrick Corry, who died four months after being hit on the head with batons by the RUC in 1969, through to the McGurk’s bar bombing in December 1971 and the killing of 18-year-old Peter McBride by the British Army in September 1992.

The New Lodge community has a particular conflict narrative that remains to be told – this includes lives lost, imprisonment and discrimination.