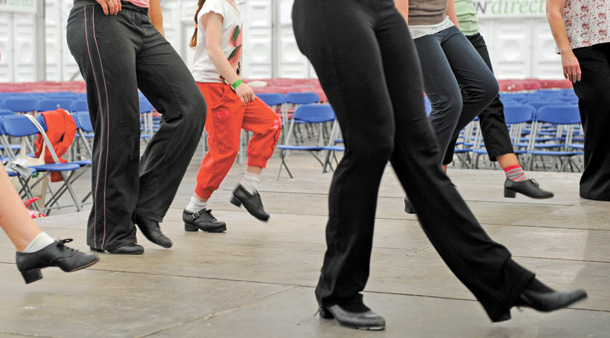 • There’s lots of variety including a nature trail, history tour or the Sean-nós dancing workshop

There is a bit of shyness and lack of confidence about using Gaeilge – a bit like like that insecurity embarking on a new relationship. Throw caution to the wind. You will be among cairde who probably feel the same

AFTER much hassling from my favourite editor I decided that it’s time to reach out as béarla to all of you who have a grá for our language but maybe baulk at the idea of spending a whole weekend with Gaeilgeoirí. We are going to have a Slógadh Weekend in Belfast in the second weekend in March (keep it free).

This weekend just happens to be a gathering of party members who want to have a bit of fun – yes, fun agus ceol agus craic agus spraoi. The fact that some of it is as Gaeilge should have no bearing on it. Actually, it is going to be bilingual – by that I mean as béarla agus Gaeilge, lest there be any confusion.

I have now been the Oifigeach Náisiúnta Gaeilge for 10 months and although I believe that everyone has a wonderful love for Gaeilge, there is a bit of shyness and lack of confidence prevailing -a bit like that insecurity you get when embarking on a new relationship. My advice is to proceed headlong and throw caution to the wind. You will be among cairde who probably feel the same – safety in numbers and all that. The whole idea behind Slógadh this year is really to give us a chance to enjoy the social aspect of belonging to a party of like-minded people – some of this is as Gaeilge and some as béarla.

We spend all year working hard and more likely to have a closer relationship with our laptops than each other. My laptop is, of course, a fluent Gaeilgeoir with the help of Gaelspell and other very handy programmes. A list of these will be provided for you when you come to Slógadh (you see, there are perks). At €25 per person (and this includes all meals and entertainment), it’s probably cheaper than staying at home. We have lots of different events so if the rang Gaeilge is not for you then you can strike off on a nature trail, history tour or the Sean-nós dancing workshop. There’s lots of variety. 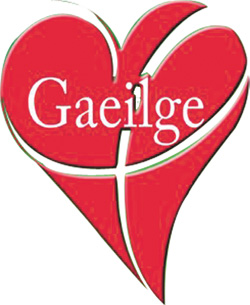 On Saturday morning there will be a key session to get your valuable input on how we can improve Gaeilge within Sinn Féin. I know any language lessons can be expensive but there may be other solutions, which is why I need you to come to this particular session on ‘Gaelú an Pháirtí’. There will be no bata mór – this session is open to all party members and whether you want to communicate as Gaeilge, Béarla or French, that’s quite alright so long as you participate. Sin é an príomh rud – the main thing. La principale chose.

After this, it’s off to take part in which ever event suits you and then, in the late afternoon, we will have our main discussion chaired by Peadar Tóibín TD. The theme is loosely based on our cultural identity and politics. Among the speakers is author Michael Harding, whose  fiction works include The Trouble With Sarah Gullion and Priest, described by Pat McCabe as “two of the finest Irish novels of the 1980s”. His most recent stage play, The Tinker’s Curse (nominated for Best New Play at the Irish Theatre Awards 2007) toured Ireland in 2011. He is a weekly columnist with The Irish Times and his new book, Staring At Lakes (a memoir of love, melancholy and magical thinking) has just been published. He has the richest deepest voice I believe I have ever heard and has a unique and wonderful way with words – a session not to be missed. We will then have an hour or two off, followed by dinner.

So, a chairde, don’t delay and get cracking on with the booking. If you have not already received your information packs, you can contact mise directly and I will help you out. I will see you in Béal Feirste on Friday 8ú Márta – Domhnach 10ú Márta. 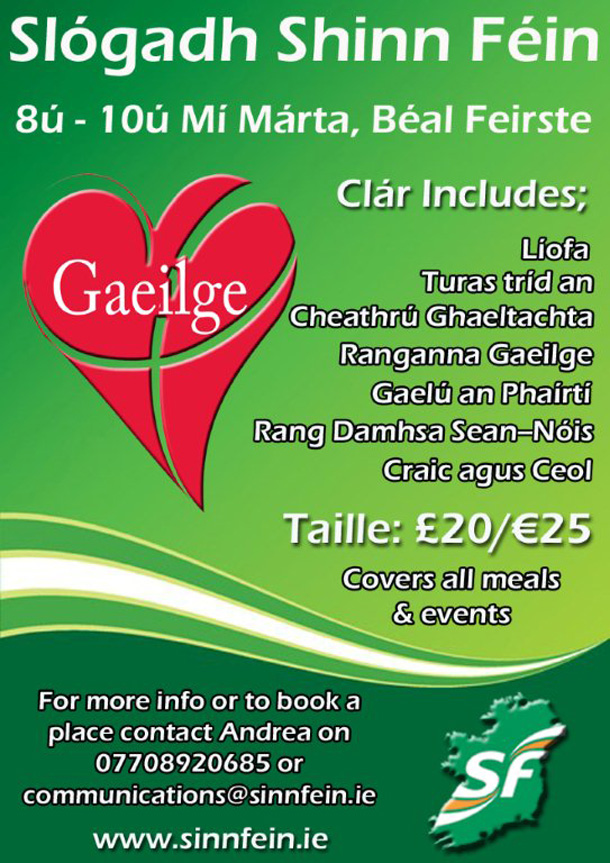