Two real opportunities to put forward the Sinn Féin alternative and gain further support for change across this island are presented in by-elections in Mid-Ulster and Meath East.

THE ‘Croke Park 2’ public sector pay talks were a missed opportunity to tackle vested interests and implement a degree of fairness and equality in addressing Ireland’s economic difficulties.

Instead, neither the Government or the trade union leadership seriously addressed excessive pay at the top of the public sector.

Even after the 10% cut to high pay, those at the top of the public sector will still earn more than the French President and the British Prime Minister. Meanwhile, those working below them will feel the pain hardest.

Increments and unsocial hours allowances are key elements of pay for frontline workers such as nurses, paramedics, firefighters, gardaí and others.

The Fine Gael/Labour Government is pricing workers out of a living. Successive Budgets have disproportionately hit those on low and middle incomes. Now, Croke Park 2 takes more off of those who cannot afford to give any more.

The bitter irony of these conditions being forced on low-paid and middle-income workers by a Labour Party in government while marking the centenary of the 1913 Lockout has not been lost on many people watching this.

The Fine Gael/Labour Government and their predecessors in Fianna Fáil baulk at the idea of tackling vested interests. This ‘Consensus for Cuts’ refuses to entertain any suggestion that they should ask those who have more to pay more.

The biggest difference between Sinn Féin and these parties is that Sinn Féin wants real and fundamental change in the way this country is run.

Two real opportunities to put forward the Sinn Féin alternative and gain further support for change across this island are presented in by-elections in Mid-Ulster and Meath East. 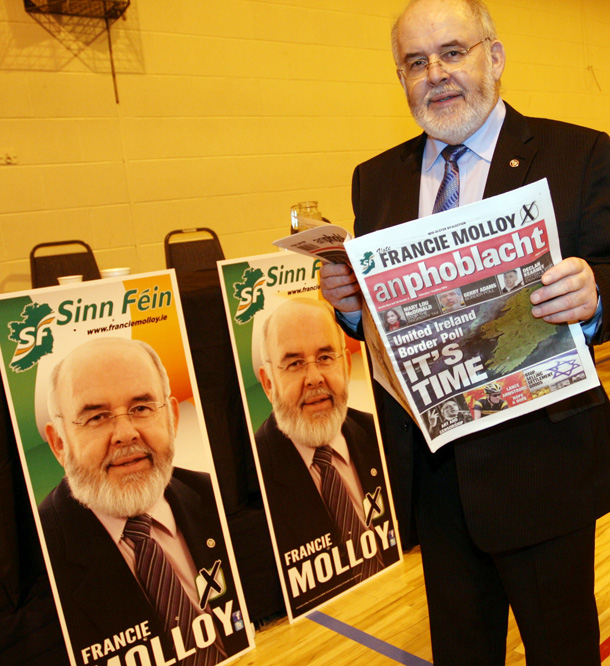 The Mid-Ulster by-election sees veteran Civil Rights activist Francie Molloy standing for Sinn Féin against the combined forces of the DUP, Ulster Unionist Party and fringe unionist parties who have united in an effort to wrest back the seat and return to the bad old days of unionist domination.

A win for Francie Molloy will build on the hard work that has been done over the years in moving away from conflict and will underline the message that all of us — unionists, nationalists, republicans and others — must work together to build a shared society.

Meath East, perhaps more than most places, is ravaged by mortgage distress and negative equity. Individuals, couples, and families are crucified with personal debt and they’re suffering in silence.

Sinn Féin not only understands the challenges faced by working families in Meath East and across the country but is willing to stand up for their interests and to fight to ensure they and their children have a future with real hope.