‘This cut is wrong, it is indefendible. It’s not just unfair, it is indecent’ – Mary Lou McDonald

‘If you proceed with this cut you may be denying some mother, father, son or daughter the ability to care for a loved one in their own home. In my book, that is immoral’ – Jonathan O’Brien

THE Fine Gael/Labour Government cutting of the Respite Care Grant by 19% has caused public outrage, turmoil within the Labour Party and provoked heated exchanges and passionate speeches in the Dáil chamber.

The Respite Care Grant is an annual payment to carers by the Department of Social Protection. In December, Social Protection Minister Joan Burton (Labour) announced that the annual grant would be cut from €1,700 to €1,375. This year, 77,000 people applied for the grant. The Labour Party lost another deputy over the cut, with the party’s chairperson, Colm Keaveney TD, being expelled from the parliamentary party after he voted against the Government on this measure. He became the fifth Labour TD to be expelled from the party that won 37 seats at the last general election.

There were powerful arguments in the Dáil from Sinn Féin and other opposition TDs calling for the Government to back down on the cut.

Sinn Féin Cork North Central TD Jonathan O’Brien gave an emotional personal testimony on how his family had used the Respite Care Grant to care for his terminally-ill father.

“My mother was a carer. She cared for my father who passed away in August. She used the Respite Care Grant to subsidise my father’s medical care so we could keep him at home and grant him his final wish: to die in peace with his family. If we didn’t do that, we would have had no other choice but to put him into a home. This cut is just €26million out of €3.5billion. The 77,000 carers out there want the resources and capabilities to do what is right by their loved ones and if you proceed with this cut you may be denying some mother, father, son or daughter the ability to care for a loved one in their own home. In my book, that is immoral.”

Aengus Ó Snodaigh read out an email from a mother of three children, of which two have special needs. The woman, whose husband passed away last year, said she is not sure how she is going to cope.

“This cut in Respite Grant, plus the €10 cut per child to Children’s Allowance, the cuts in the household benefits package, and the increase in medical prescription charges has left me in tears,” she said.

Martin Ferris also read out a letter from a constituent with a very ill child who has required 37 different surgical procedures in recent years, including five open-heart operations. A visibly angry Ferris pounded his desk — startling some Labour Party backbenchers — as he confronted the Minister for Public Expenditure and Reform, Brendan Howlin (Labour).

“All of this is happening on your watch,” Ferris thundered, pointing across the floor at the minister. “You are responsible for Amy and her well-being. That 12-year-old child is only barely surviving. Her father, a lone parent, is trying to ensure she does survive. And what happens? She’s getting no support services, you offer a measly €1,300 when it costs €15,000 to send that child across to Southampton to try and save her life. That’s why the Irish people are disgusted with you and what you have done because you,” he declared, pointing at Labour TDs, “are supporting the wrongs being carried out by this Government.” 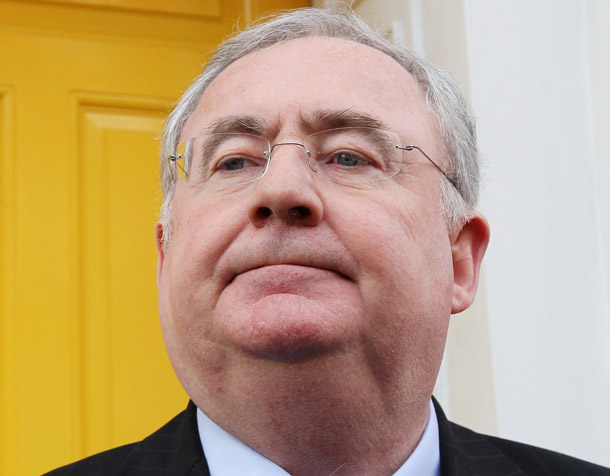 Sinn Féin deputy leader Mary Lou McDonald tore into Communications Minister Pat Rabbitte (Labour), describing the cutting of the Respite Care Grant as “a breach of decency” and urged him to reverse the decision. Rabbitte failed to respond to the issue at all and instead mocked TDs in the Technical Group before then attacking Sinn Féin. Mary Lou responded:

“Minister Rabbitte, I’ve asked you a very direct question on respite care. So don’t try and worm your way out of this. This isn’t a moment for comedy in this chamber, I’m putting it to you that this cut is wrong, it is indefendible. It’s not just unfair, it is indecent and if you have any decency left in you, revise this issue and tell the carers out there that you will row back on it. And if you don’t do it, minister, let me make a prediction: there will be a sufficient public outcry that if you don’t make the reverse voluntarily you will be forced to do so. Do the decent thing!”