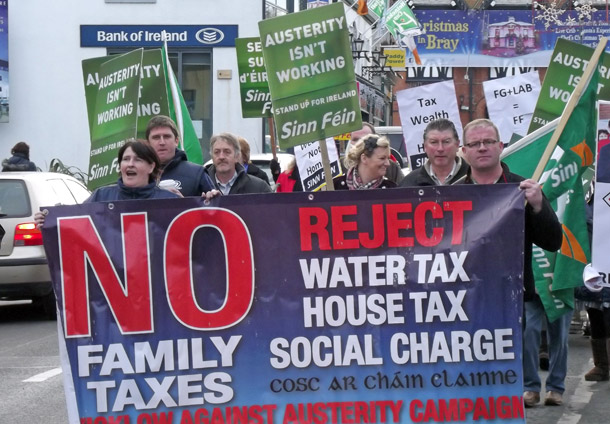 "North and South, in government or in opposition, Sinn Féin has pointed to a better, fairer way forward that is about protecting public services and families on low and middle incomes, fair taxes, investment in jobs, and growing the all-Ireland economy." – Gerry Adams, in his New Year message

Our country is undergoing huge changes. The Peace Process has allowed an entire generation live without conflict. This generation should now be playing its part in developing the Irish nation as we approach the centenary of 1916.

However, so many institutions in this country - political, economic and banking, have failed our people. Rather than playing their part in building a modern, dynamic republic, so many of our youngest and brightest have been forced onto the dole or to various corners of the globe.

The imposition of austerity polices by governments in Dublin and London is stifling Irish economic growth, causing severe hardship for families, and creating poverty.

There is deep anger that the Fine Gael/Labour Party Government has been merciless in pursuing policies that harm the welfare of its own citizens while adopting a meek, ineffective approach in negotiations with banks, Europe and the IMF. 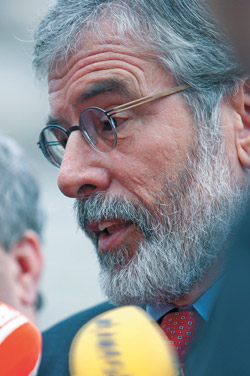 Our country urgently needs a change of direction.

North and South, in government or in opposition, Sinn Féin has pointed to a better, fairer way forward that is about protecting public services and families on low and middle incomes, fair taxes, investment in jobs, and growing the all-Ireland economy.

The Peace Process, one of Ireland’s success stories in recent years, remains a work in progress. The next stage must see a genuine process of reconciliation among the people of Ireland and between Ireland and Britain. 2013 could be the year of reconciliation. This could address, comprehensively, issues such as respect for identity, symbols and culture. It requires political, civic and community leadership.

Recent misrepresentations by unionist politicians of a ‘chipping away at everything British’ in the North, is a dangerous falsehood. The North is no longer a unionist fiefdom and must reflect Irishness and Britishness with equality of treatment as envisaged in the Good Friday Agreement.

Equality also means freedom to purse political objectives peacefully and democratically. In the coming weeks, Sinn Féin will launch a campaign to secure a Border poll. This is part of the Good Friday Agreement arrangements.

The current qualified and conditional claim by Britain on the North will change when a majority of citizens vote to end the Union. Sinn Féin wants to see a Border poll held in the upcoming period. That means building support for a poll and for a vote to end partition.

The economic and political dynamics of the 21st century point to greater co-operation and harmonisation. Common sense and the logic of history, argue for the peaceful reunification of our country. I believe it is possible to persuade a majority of citizens that the division and partition of the past can be replaced by a future based on unity and equality – an agreed Ireland and a pluralist, inclusive and modern republic.

For now, I wish you all a happy and peaceful New Year.