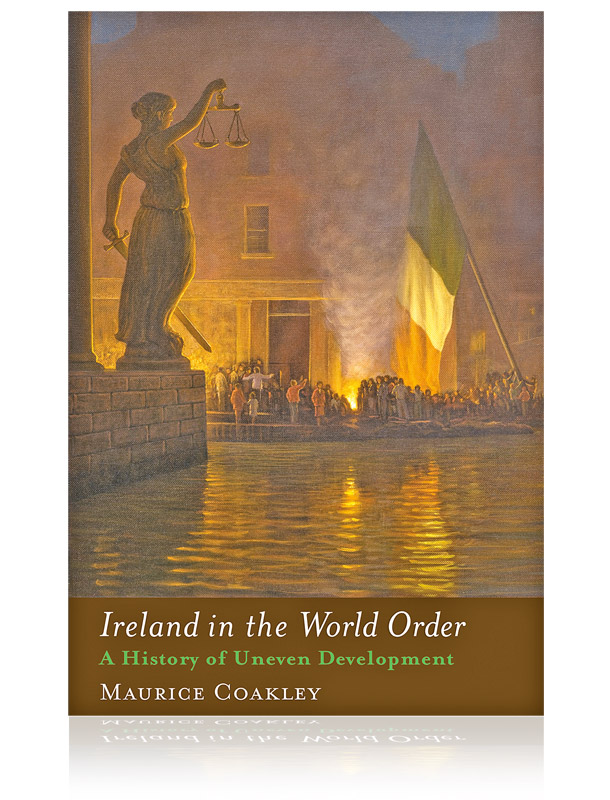 ROBBIE SMYTH reviews Maurice Coakley’s Ireland in the World Order and offers some tips for republican reading, light and heavy, in 2013 to maybe spend those Christmas book tokens on.

ON ANY of the established wisdoms of publishing in Ireland, Maurice Coakley’s Ireland in the World Order shouldn’t work.

The first of these truisms is that the Left in Ireland can write polemics, tracts and pamphlets but they struggle to conceive a book-length argument and analysis.

Eamon McCann’s War in an Irish Town, Gerry Adams’s The Politics of Irish Freedom, and Michael Farrell’s The Orange State stand as lone sentinels in a wasteland of attempts after Ernie O’Malley’s On Another Man’s Wound to tell it like it really is.

Secondly, the Left can’t write well; they disdain literature, style and erudition; or, more simply put, they don’t make their work accessible and readable. Sorry to say, this is often true and some worthy projects have stumbled on the dictionaries and dialectics the authors swallowed to prove they could make the simple complex, and the complex an unintelligible cypher.

Thirdly, the Left author, with his publishing deal signed (it usually is a he, sadly), too often proceeds to use his new-found platform to talk to the smallest micro group of supporters about the failures of rivals or the promised land that awaits post-revolution.

Coakley’s canvas is ambitious but, guess what? Ireland in the World Order is a delightful read. Yes, I know I sound like a book club groupie (and I do know the author as a work colleague) but this is a good read; actually, no, it’s a great one.

The book’s subtitle reveals the core theme. A History of Uneven Development tells the story of Ireland’s conquest by Britain, from medieval times to the present day. This is its strength. It rolls easily from discussions of the Tudor centralisation programme to Ireland’s present-day role on the periphery of the EU’s flawed economic experiments.

It talks about capitalism, colonialism and Ireland’s economy in a fascinating historical analysis that puts substance to the economic conquest of the island and why we are in the seemingly never-ending dilemmas of debt mountains and bank bond pay-offs today.

This slim volume has hidden debts and Coakley uses language rather than graphs or acronyms to make his case. In a world of tweets, text and status updates, this book is worth the long weekend or a few dark January nights.

So forget about the recession ‘misery lit’ of McWilliams, Ross and O’Toole. Put the kettle on. Settle down and read some of this book.

Republicans read fiction. I know they don’t like to talk about it much, and we’re not in the realm of Maeve Binchy or 50 Shades tomes, but between the history and the sports an occasional fiction read makes the bedstand.

So, in that light, two classic reads of 2012 are worth considering for your new year ‘must read more’ resolution.

Richard Ford’s Canada is a compelling read, telling the story of two teenage twins whose parents rob a bank and along the way paints a picture of contemporary US culture and modern history as a backdrop to a great tale.

Paul Howard’s alter ego, Ross O’Carroll-Kelly, has captured the zeitgeist of modern Ireland more than any other fictional character except maybe Father Ted. His latest book, The Shelbourne Ultimatum, promises a laugh-out-loud romp through Dublin’s NAMAland and recession culture. Check out his Twitter feed if you don’t believe me.

On the history front, with the 1916 anniversaries looming it is not too early to start boning up on 1916 trivia. Mick O’Farrell’s 50 Things You Didn’t Know About 1916 and/or his previous book A Walk Through Rebel Dublin 1916 should be on your must-read list for sure.

Mixing the quirky world of graphic novels and Iran’s likelihood of being a 2013 news story, there is never a better time to read Marjane Satrapi’s Persepolis. It gives an excellent introduction to the modern history of the state.

Finally, in the category of books we should buy but probably won’t, there is Jerry Brotton’s History of the World in 12 Maps. It is still priced at over €20 but bound to hit the ‘three for two’ stand soon.