A decade of anniversaries 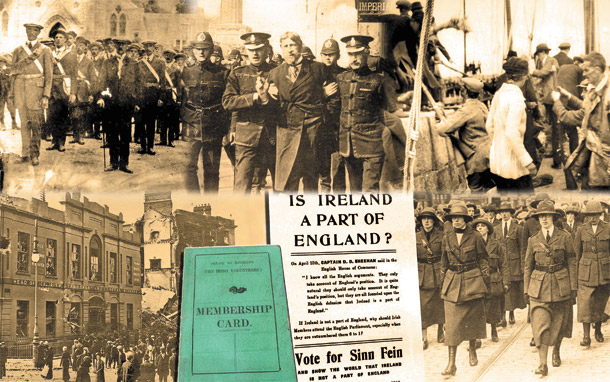 THE DECADE of anniversaries is finally upon us – this being specifically the centenary of the Irish revolutionary period of 1913 to 1923.  These years wrought enormous political and social change, not only in Ireland but also in the rest of Europe and the world at large.

The world of 1913 would be unrecognisable from the world ten years later in 1923. Ireland was very much part of this change, so much so that the colonised peoples of the world would eventually take their cue from Ireland’s example of anti-colonial revolution during the course of the 20th century.

The year of 1913 was in an age of seemingly invincible European empires built on a global scale, whose power appeared to be incontestable, and who could exploit, rob, plunder, pillage, murder and massacre at will the peoples of the Earth. To the forefront of the criminal activities of these imperialists was none other than the British Empire, upon which ‘the sun never set’ (and it seemed never would).

Eventually, the violence, greed and aggression of these empires would turn in on themselves and result in the First World War (then referred to as ‘The Great War’). The carnage that the armies of these empires would inflict upon each other, particularly for the soldiers in the trenches of France and Flanders, showed the generals and the military class leaderships up to be incompetent.

The respective ruling classes and elites were irrevocably weakened by the end of this war. Their credibility never fully recovered and it would eventually open up significant popular challenges, resulting in Europe’s year of revolutions in 1919.  However, the inconclusive nature of these progressive advances would later result in the fascist and reactionary backlash of later decades.

In Ireland, this decade included the momentous events in Irish history such as the foundation of the Irish Volunteers; the 1913 Lock-Out and the rise of militant labour; the formation of the Irish Citizen Army and the first organised challenge by the Irish working class; the unionist reaction and the Larne gun importation for the unionist colonial militia that was the Ulster Volunteer Force; the British Army mutiny opposed to mobilising against the UVF; the Asgard arms shipment and the Bachelor’s Walk Massacre by the British Army; the split of the Irish Volunteers and Redmond’s support of Britain’s war effort, leading tens of thousands of Irishmen to pointless slaughter and deaths in the trenches; the seminal event of the Easter Rising of 1916 and the subsequent execution of the leaders; the internment of IRA Volunteers in Frongoch and their subsequent release in 1917; the anti-conscription campaign; Sinn Féin’s victory in the 1918 general election; the First Dáil; the Tan War of 1919 to 1921; the Anglo-Irish Treaty of 1921 and the subsequent Treaty debates; and finally the Civil War and the eventual republican defeat.

If there weren’t enough anniversaries there to make your mouth water there are more. April 2014 will see the thousandth anniversary of the Battle of Clontarf, an event that figures prominently in the Irish national tradition of repelling (and crushing) a dangerous foreign invasion. The 1 May 2019 will be the 850th anniversary of the landing of Strongbow and his Norman knights in Bannow Bay, ushering in centuries of English/British misrule, the consequences of which we still contend with today.

On the international front, an event of critical importance in human history was the Bolshevik Revolution of October 1917 and November (according to the modern calendar) 2017 will see the 100th anniversary.

The true importance of anniversaries lays not so much in the events themselves but how they are remembered and what lessons they have for us in the here and now. The seminal event in this decade of anniversaries for Irish people is, naturally enough, the Easter Rising of 1916. This was the pivotal event from which subsequent events flowed.

The 1916 Rising in particular and the Irish Revolution in general has been a discomforting embarrassment to the political establishment in the 26 Counties. This is due to the revolution having never been fully completed and was in actual fact subverted by reactionary interests. It is precisely for this reason that republicans must ensure that society at large learn the pertinent historical lessons and not some reactionary interpretation of it.