From the Archives: One woman’s war 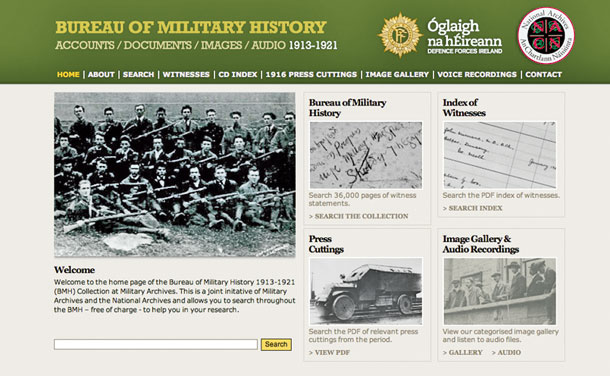 Renegades: Irish Republican Women 1900-1922 by Ann Matthews, and T Ryle Dwyer’s book The Squad (and the Intelligence Operations of Michael Collins) are available from the Sinn Féin Bookshop www.sinnfeinbookshop.com

THE collection of witness statements from the revolutionary years 1913-1921 in the Bureau of Military History in Dublin (www.bureauofmilitaryhistory.ie) was last month made available online for the first time. There are 36,000 pages of testimony from hundreds of witnesses, mostly members of the IRA, Cumann na mBan, Sinn Féin, the IRB and Fianna Éireann. It is an historical treasure trove.

The site is fully searchable and is of special value to those researching the local history of the period. Here are excerpts from the testimony of one woman, Catherine Byrne (married name Rooney), from 17 North Richmond Street, next to Croke Park in Dublin’s north inner city. She was one of the most active members of Cumann na mBan. The family home was regularly used by the IRA during the Black and Tan War, including by the Dublin Active Service Unit, better known as ‘The Squad’.

I was the first member of Cumann na mBan to enter the GPO for the Rising. Myself and two other girls, one of them my sister, were rambling round O’Connell St and we were making for home. When we reached home my eldest brother, Paddy, who had his Volunteer equipment and gun in a back room of the house, had taken them away and left for the fight with his company, C Coy, 2nd Battalion. This confirmed the news that Seán Flood had given me on my way home that the fight was starting that day.

My mother told me to get my equipment and to follow them. We tore up two sheets for bandages and I set out, accompanied by my sister Alice. She parted company with me and went on to Liberty Hall to join her friend Molly O’Reilly, who was a member of the Citizen Army.

I turned into O’Connell St past Tom Clarke’s shop and, glancing back on hearing the sound of marching men, I saw a company of Volunteers led by Captain Michael Staines. I fell in behind them and talked to a few of them that I knew, including Michael Staines, who was a captain in my brother’s company. One of them told me the scrap was starting and that they were going to the GPO. When they came down to Nelson Pillar, Staines gave the order, “Right turn!”, so I did the “Right turn” too. It was then 12 o’clock exactly.

I went over to the footpath outside the Post Office to speak to Michael Staines. I asked him to let me in but he said no, I was to go home. He added: “I’ll tell Paddy on you” (that was my brother). I hung around and by this time men had been posted outside the Post Office. I spotted Frank Murtagh at the Prince’s St corner and he recognised me.

The Volunteers had broken in the front windows of the office, but the side windows had not yet been broken. I asked Frank Murtagh to lift me up to the side window at the corner where the stamp machine is now. He did this with the aid of another Volunteer and I kicked in the glass of the window. I jumped in and landed on Joe Gahan, who was stooping down inside performing some task. He started swearing at me, asking: “What the bloody hell are you doing there?” I cut my leg and arm with the glass as I jumped and he drew my attention to the bleeding, which I had not noticed.

I am sent to Dublin with gelignite and ammunition

Catherine moved to Glasgow and helped the IRA there. 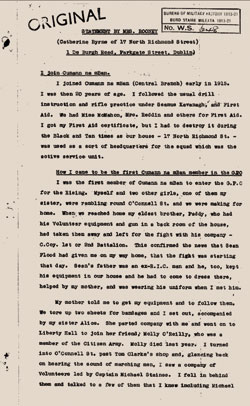 It was gelignite and .303. We spent our nights sewing the gelignite on to a canvas sugar bag, sewing each stick in separately between the sides of the bag. We did the same with the .303 [ammunition].

We made preparations to dress up; that meant loading up the “stuff” on our persons. The fuse was wound around my left arm and a pad of cotton wool placed over it. In order to give the whole thing the appearance of a genuine surgical case, Mrs Mooney put a drop of some strong-smelling stuff on the cotton wool.

We were met at the station in Dublin by a Citizen Army man who had a cab and we were driven straight home where we handed over the stuff to my father who dumped it safely in a hideout he had.

A doctor, Dr Daly (I think he was only just qualified) examined my arm which was getting more and more painful. He told me that the smelly stuff that had been sprinkled on the cotton wool was carbolic acid. It had eaten into my skin and my arm, which then, as now, was very thin and was in a bad way. However, after some time it healed. The doctor told me I was very lucky that it had not to be cut off. I have the marks on it to this day.

The Thompson gun is brought to our house

When the first Thompson gun was brought into Dublin, it was transferred to our house to be examined and assembled. Those present were Michael Collins, Emmet Dalton, Paddy Daly. I am not sure whether Charlie Dalton and Bill Stapleton were there.

My task was to go out on the street and keep watch and one of Ray brothers was posted at the back door. After some time the men left and went out to the Casino in Marino where they tried it out. Some of the Christian Brothers warned them that they could be heard all over the place. They said they did not care — they had a Thompson gun. 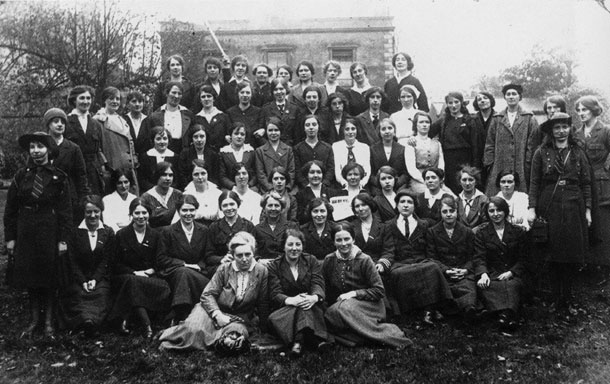 • The women of the Irish Citizen Army, Cumann na mBan and Clan na Gael in late 1916 at Ely House