Hurlers who can stick it out 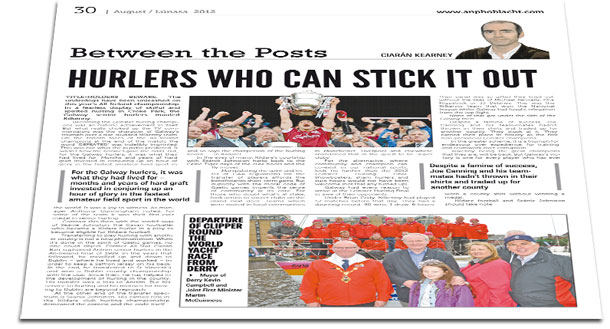 For the Galway hurlers, it was what they had lived for – months and years of hard graft invested in conjuring up an hour of glory in the fastest amateur field sport in the world

TITLE-HOLDERS BEWARE. The underdogs have been unleashed on this year’s All-Ireland championship. In a fearless display of skilful and spirited hurling in Croke Park, the Galway senior hurlers mauled Kilkenny.

Becoming the Leinster hurling champions was an historic achievement in itself. But what really choked up the TV commentators was the character of Galway’s triumph over a star-studded Kilkenny team. On the forlorn faces of the All-Ireland champions at the end of the match, the word ‘DEFEATED’ was indelibly imprinted. This was not what the pundits predicted. It wasn’t how the bookies gave the odds. But, for the Galway hurlers, it was what they had lived for. Months and years of hard graft invested in conjuring up an hour of glory in the fastest amateur field sport in the world. It was a joy to witness. As manager Anthony Cunningham noted, for some of the team it was their first-ever medal in senior hurling.

Contrast this then with the sordid saga of Seánie Johnston, the Cavan footballer who became a Kildare hurler in a ploy to become eligible for Kildare football.

Transferring to play hurling with another county is not a new phenomenon. When it’s done in the spirit of Gaelic games, no one could object. Former All-Star Ciarán Barr captained Antrim senior hurlers in the All-Ireland final of 1989. In the years that followed, he travelled up and down to Dublin – where he lived and worked – in order to keep a Saffron jersey on his back. In the end, he transferred to St Vincent’s and won a Dublin county championship with the club. Since then, he has helped in the development of hurling in the county. His transfer was a loss to Antrim. But his service to hurling and his motives for moving to Dublin are beyond reproach.

At the other end of the transfer spectrum is Seánie Johnston. His cameo role in the Kildare club hurling championship demeaned the contest and the code itself - and so says the chairperson of the hurling board . . . in Kildare!

In the eyes of many, Kildare’s courtship with Seánie Johnston harks back to the Celtic Tiger days of the cute hoors and the fly moves.

Manipulating the spirit and letter of GAA regulations for the transfer of players affords the beneficiaries short-term gains. But duplicity with the moral code of Gaelic games imperils the sense of community at its core. For those who doubt what’s at stake, look across to soccer clubs on the island next door. Teams which were rooted in local communities in Manchester, Liverpool and elsewhere abandoned that in the quest to be ‘super clubs’.

For the alternative, where community and champion can co-exist in our national sports, look no further than the 2012 Leinster Hurling Final. Showboaters, sham hurlers and cute hoors would not have been welcome (not that any turned up).

Galway had every reason to arrive at the Leinster Hurling Final in awe of their opponents.

Under Brian Cody, Kilkenny had played 57 matches before that day. They had a daunting record: 50 wins, 1 draw, 6 losses. Their panel was so gifted they lined out without the likes of Michael Fennelly, Cha Fitzpatrick or JJ Delaney. This was the Kilkenny team that won the National league whilst Galway had fought relegation from the top flight.

None of that got under the skin of the Galway men.

Despite a famine of success, Joe Canning and his team-mates hadn’t thrown in their shirts and traded up for another county. They stuck at it. They earned their place in history as the first non-provincial Leinster champions.

In the greater scheme, it is a triumph for endeavour over expedience, for training and teamwork over corruption.

Kilkenny being the great champions that they are, will be back. But Galway’s victory is one for every player who has ever worn a county shirt without winning a medal.