Much ado about very little 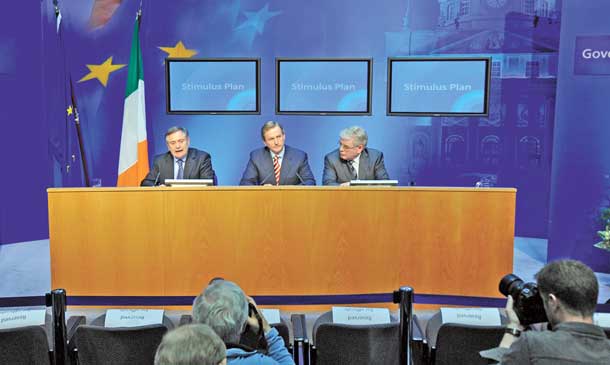 The Construction Industry Federation says more than 13,000 jobs will be lost before any of the projects listed in the plan even begin – talk about running to go backwards

THERE ARE over 430,000 unemployed in the 26-County economy, at 14.5% the fifth highest in the European Union.  Measures – any measures – that will reduce that figure and create jobs are to be welcomed and it is in that context that the Government’s ‘jobs stimulus’ was to be welcomed.

What wasn’t to be welcomed, however, was how paltry the package was.

The Government itself estimates that the package will create up to 13,000 jobs over seven years through a total investment of €2.5billion: that is an investment of €320million a year.

Unemployment will reduce from 14.5% to 14.2%. Good for the 13,000 but barely noticeable in the economy as a whole which, in any case, continues to decline because of the lack of domestic demand.

To put this in context, the Construction Industry Federation estimates that more than 13,000 jobs will be lost before any of the projects listed in the plan even begin. Talk about running to go backwards.

Sinn Féin, along with the unions and the Left in general, has for a long time been arguing for a real stimulus package, urging that the National Pension Reserve Fund be used to finance it. But the €2.5billion announced by the Government falls far short of the €13billion package proposed by Sinn Féin.

But while the Government announced its package, it is also continuing to slash the capital budget. €750million is being taken out this year, and a further €780million over the next two years – that’s equal to 60% of the Government’s package.

As to the rest of the financing, there is considerable doubt about the willingness and ability of the private sector to provide its share. We have already seen the collapse of many Public-Private-Partnership projects, especially in the housing sector, yet construction projects are expected to be financed from this source at a time when the banks aren’t lending and the money given by the state to recapitalise the banks has gone into a bottomless pit with no return to the economy.

The second dubious source of funding is the sale of state assets. This is ideologically driven nonsense from the European institutions and the IMF. In any case, at a time when the market is weak, selling such assets will be a fire sale with poor return for the value given away.

And even worse is the idea of selling really profitable assets, such as the ESB and Bord Gáis. Over the last ten years, these companies have provided the state with income of €2billion. That is to be foregone for a marked-down sale at the behest of right-wing ideologues.

And the balance is to come from the European Investment Bank. This will not, however, be matching funding but merely a minority part of the whole package.

The projects themselves – in schools, roads, hospitals and other capital projects - are essentially worthwhile, even if the school-build programme was already announced in March but is announced again now to give the package a better look.

But they do seem to have been chosen at random: a quick glance through projects already proposed but no joined-up thinking to promote self-generating from these projects to others down the line.

As right-wing economist Dan O’Brien said in The Irish Times, no cost/benefit analyses have been made public in respect of these projects.  The Government’s reticence here suggests that none have been made.

So, the fact that a jobs stimulus is on the table is certainly to be welcomed but, in SIPTU President Jack O’Connor’s words, it is only a first step. And a very limited first step at that.

Even if the funding fully materialises and all the projects get implemented, its effect on unemployment will still only be marginal and no way sufficient to generate the type of increase in domestic demand on which an overall growth of the economy depends.

And the reason can be seen between the lines. This is not really a Government initiative but a European one, designed to fob off political opposition to austerity. The EU ‘signed off’ on the package BEFORE it went to the Cabinet for approval.

Such is the supine subservience of the current political establishment to Europe and the right-wing economics championed by Labour and Fine Gael.

No, a real stimulus still remains a necessity, one which, as Sinn Féin suggest, will have a much bigger investment, will utilise all resources in a co-ordinated plan to generate jobs and domestic demand so that the economy can begin to regenerate itself.

What the Government and the European Union have given us is spin and pretence. Unfortunately for them, if their fine words fail to produce the jobs, they will just generate more anger against their failing policies. 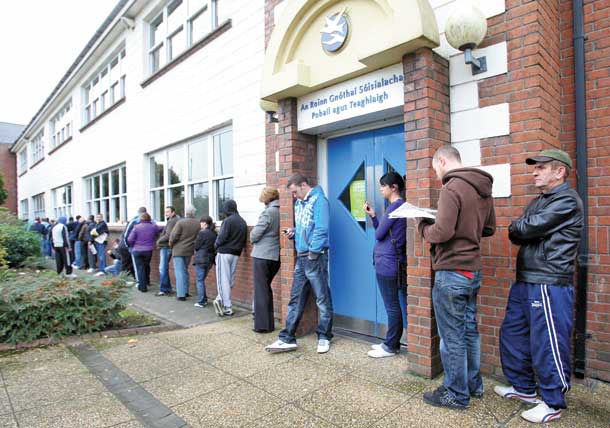 Even if the funding fully materialises, this package’s effect on unemployment will still only be marginal