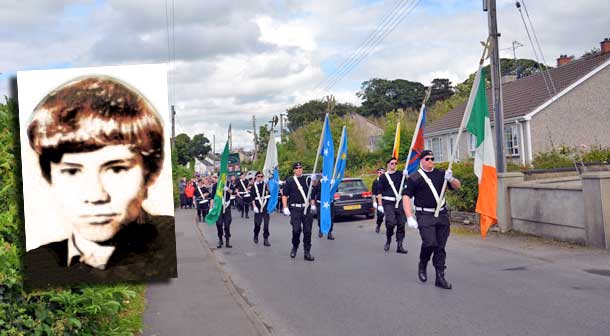 • The Tobias Molloy commemoration parade makes its way to Donneyloop

Christine recounted the conversations she’d had with Tobias in which he outlined his dilemma on whether he should join the Young Socialists, the Provisional IRA or the Official IRA

FORTY YEARS on from the killing of 18-year-old Fianna Éireann member Tobias Molloy at the hands of the British Army at the infamous ‘Camel’s Hump’ checkpoint on the Strabane/Lifford border, hundreds of local people attended commemoration events organised to mark this landmark anniversary of this young republican’s untimely death .

In the first event on Sunday (organised by the Molloy/Devlin/McCauley Sinn Féin Cumann with the Strabane National Graves Association), hundreds of people fell in behind the Strabane Memorial Flute Band in a parade from Clady to a graveside commemoration ceremony at Donneyloop Cemetery, where Tobias is buried.

Proceedings were chaired by Michaela Boyle MLA and, following the laying of floral tributes and wreaths, Anne Caldwell, a cousin of Tobias, read a moving poem penned by a local Lifford woman at the time of his death.  Anne recited prayers in Irish, followed by the lowering of the national flag.

Michaela Boyle then introduced the main speaker, Christine McGillian, who was a close friend of Tobias. In a deeply poignant address she outlined her personal recollections of Tobias since first meeting him at the Ventures Youth Club at St Colman’s High School and how this “dapper dressed and extremely handsome” youth became her first boyfriend. She went on to describe his hardworking but fun-loving nature and how the tumultuous events taking place both in the North and internationally had politicised and radicalised Tobias, like many of their generation, and how these events had shaped Tobias into a deeply committed socialist and republican activist.

She recounted the conversations she had with Tobias at the time in which he outlined his dilemma on whether he should join the Young Socialists, the Provisional IRA or the Official IRA and how he went on to join the latter, before going on to join the Provisionals shortly before the time of his death as events in the North deteriorated. 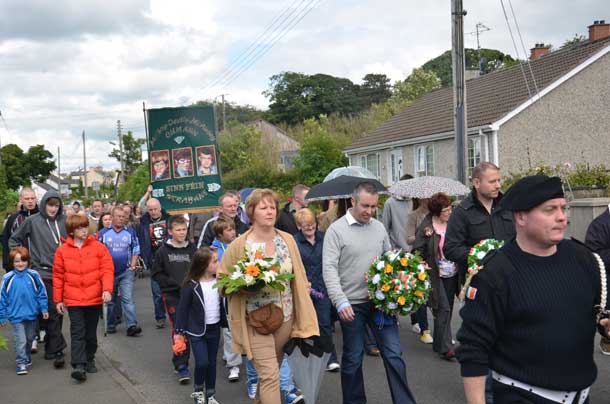 Painful memories were relived as Christine related the fateful events of the day Tobias was killed. He had earlier been in the Inter Counties Hotel in Lifford and, having just left his girlfriend home in the town, was making his way back into Strabane when he was struck above the heart by a rubber bullet fired by the British Army from the Camel’s Hump checkpoint. She spoke of how local youths helped carry the injured Tobias to Lifford Hospital, where he was pronounced dead upon arrival. She described the deep sorrow Tobias’s death evoked locally, evidenced by the thousands who attended his funeral despite the cortege coming under attack by British soldiers.

Following the sustained applause that greeted Christine’s wide-ranging and profound address, an inscribed Oak Celtic Cross was presented to the Molloy family on behalf the Sinn Féin Tyrone Commemoration Committee before Terry Boyle brought the graveside proceedings to a close, singing My Youngest Son in tribute to Tobias followed by a rousing rendition of We Shall Overcome.

On the Monday (16 July), a vigil organised by Sinn Féin Republican Youth was held at the plaque erected in memory of Tobias, close to the spot on the former Camel’s Hump, where he was killed 40 years ago to the day.  Attended by a large crowd of local republicans, the events was chaired by James McMackin and was addressed by Fermanagh republican and MLA Seán Lynch. Seán paid tribute to the memory of Tobias and in speaking about his massive commitment despite his youth spoke of the importance of young people taking an increasing role in the struggle towards a united Ireland. 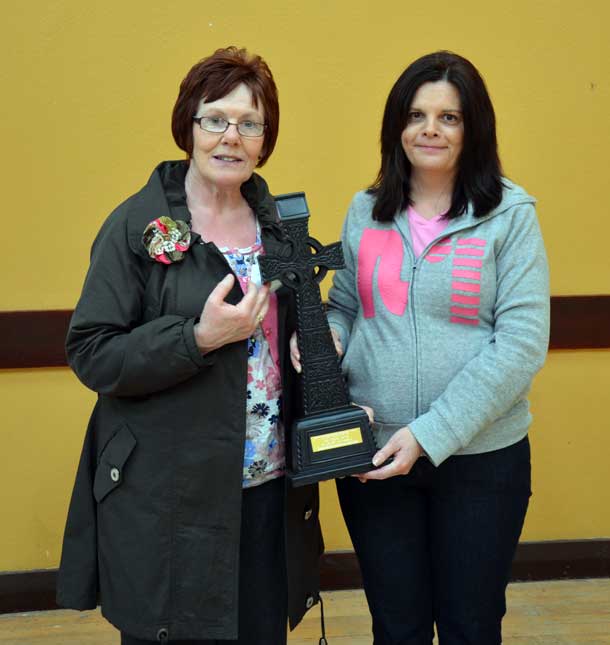