The Twelfth | Peaceful parade in Crumlin, racing back provokes rioting in Ardoyne 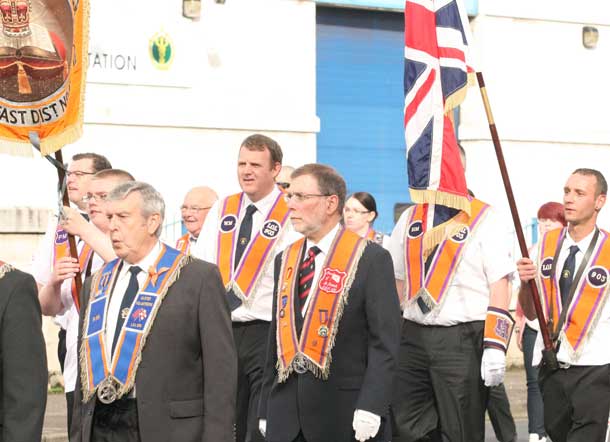 When the DUP’s Nelson McCausland, a minister in the North’s Executive, goes out of his way to excuse the behaviour of a loyalist band playing sectarian tunes outside a Catholic church on The Twelfth, he shows himself to be incapable of rising above sectarian ideology

WHEN Sinn Féin deputy Mayor of Belfast Tierna Cunningham condemns a paint bomb attack on the headquarters of the Orange Order in Belfast five days after The Twelfth Orange Order parades she is sending out a message to the attackers that their actions do not represent the wishes of the nationalist community.

By contrast, when the DUP’s Nelson McCausland, a minister in the North’s Executive, goes out of his way to excuse the behaviour of a loyalist band playing sectarian tunes outside a Catholic church on The Twelfth, he shows himself to be incapable of rising above sectarian ideology.

In the days preceding this year’s Twelfth, tension was ratcheted up after two Parades Commission determinations ruled. One was that Orange marchers must be past Ardoyne by 4pm. In the other, that only local Orangemen could make the return journey through the small County Antrim village of Crumlin.

Some members of the Orange Order warned of a Drumcree-style stand-off in Antrim if the determination stood.

In the end, and significantly, the Orange Order met the nationalist residents of Crumlin for face-to-face talks on the eve of the parade and reached a compromise that ensured the march went off peacefully and successfully.

Ardoyne was always going to be a difficult situation.

The 4pm deadline was described by unionist and Orange leaders as “draconian”. Some within unionism were again promoting a Drumcree scenario. However, Orangemen devised a plan that would see them adhere to the Parades Commission ruling. They would march past Ardoyne to the field for their ceremonies but also bus back a contingent of Orange marchers to Woodvale Road, where they would get out and march along the contentious part of the route before getting back on the bus to be returned to the field they had walked to earlier.

The irony of the Orangemen speeding by bus back from their destination so they could parade along a 100% nationalist stretch of Crumlin Road is seen by nationalists as proof that the Orange Order in north Belfast is intent on triumphalist craw-thumping rather than resolving a contentious parade.

Local Sinn Féin MLA Gerry Kelly called for the area to be “a neutral area”, with no parades.

These remarks were also directed at the Greater Ardoyne Residents’ Collective (GARC), organisers of a nationalist counter-parade.

The GARC parade, which marched along the Crumlin Road almost two hours after the Orange parade, became embroiled in clashes with loyalist demonstrators who were inexplicably allowed to encroach onto the Crumlin Road.

While it could be argued that the rioting (involving mainly anti-community and criminal elements) was not as intense this year as it has been in the past, it still impinges on the lives of local people.

These people – the residents of Ardoyne, Mountainview, Crumlin Road and the Dale streets further along Crumlin Road – have the right to live free from sectarian harassment.

The refusal of the Orange Order and unionist politicians to acknowledge the sectarian nature of their parades, their bands and their followers creates and exacerbates the problems around marching. 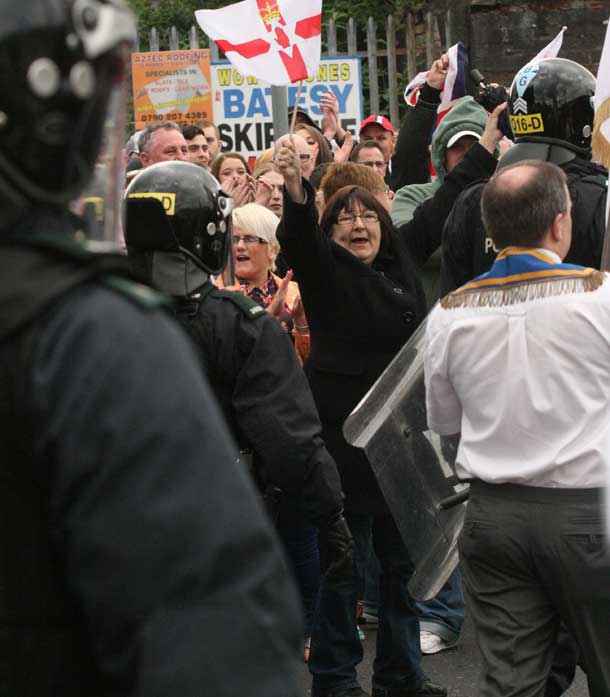 Crumlin: Dialogue was the key

THE Crumlin Residents’ Associa-tion welcomed the peaceful outcome of the Orange Order march on The Twelfth, emphasising that it was the process of dialogue that was key to this.

“We welcome the fact that the Twelfth of July in Crumlin went off peacefully. We believe it was through hard work and dialogue that this was the case.

“This result did not come out of a vacuum. There was a lot of hard work that took place on behalf of the residents of this village to ensure that the rights and the safety of those who live in Crumlin were respected and upheld.

“The Crumlin Residents’ Association met with residents, traders, the PSNI and others. Most significantly, we had face-to-face talks with the Orange Order which did help to alleviate concerns surrounding the march and agreement was reached on some issues.

“This process of dialogue we believe needs to be revisited in the coming weeks in order to further improve relations in this area. It was dialogue that help us manage and defuse a tense situation and it is dialogue that will help us to reach a resolution to outstanding issues.”