A decade fighting for justice for Gerard

Community Inquiry into the unionist murder of Gerard Lawlor, July 2002 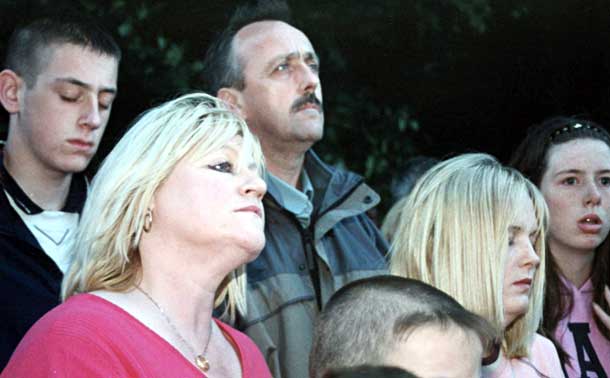 • Gerard Lawlor’s parents, Sharon and John, and fiancée Siobhán Ramsbottom, at a vigil attended by more than 5,000 people following his murder

22 JULY was the tenth anniversary of the murder of north Belfast teenager Gerard Lawlor, who was shot in the back as he walked home from the Bellevue Arms. He was shot for no other reason than he was a Catholic and he was a defenceless target. His killers were never charged even though their names were given to police by a witness after the attack.

Gerard Lawlor was 19 years of age when he was murdered. The sectarian murder followed a spate of attempted murders by loyalist gangs across north Belfast in the hours previously. The response by the police in each case was pitiful to say the least. Tensions had been rising in the days beforehand with concerted loyalist attacks on Catholic homes at interfaces such as Skegoniel, Ligoniel, Cliftonpark and Alliance. These culminated in the shooting of a Protestant teenager in Glenbryn and this gave loyalists the pretext for what they would call “a measured military response” to attacks on the Protestant community. Their so-called military response entailed, as it usually did throughout its history, naked sectarian attacks on defenceless Catholic civilians.

In the weekend of Gerard’s anniversary, I attended a community inquiry in St Enda’s GAC, Glengormley, into his murder and the subsequent police investigation. The setting was particularly poignant as Gerard was a proud member of the club and a solid midfield anchor of its senior team. Also, the club and its members have been victims of numerous loyalist attacks over the last few decades. Photographs of Club President Seán Fox and Senior Team Manager Gerry Devlin looked down on an esteemed panel that included Gemma McKeown (Committee for the Administration of Justice), Professor Bill Rolston (Transitional Justice Institute, University of Ulster), and Jane Winter (British Irish Rights Watch). Seán Fox was 72 years of age when he was tortured and shot in his home by loyalists in 1993. Gerry Devlin was assassinated outside the door of the club by loyalists a few weeks before Christmas 1997.

As well as club members, friends and local politicians, the campaigning families of the McGurk’s Bar and Loughinisland atrocities travelled to lend their support to the Lawlor family as they begin their second decade of fighting for justice for Gerard. Such was the depth of feeling for their ongoing campaign, St Enda’s was packed and welcomed all in equal measure.

I scanned the faces of the crowd as I expected to recognise some aside from the campaigners I know. I lived in the area from about the age of nine after moving with my family from the New Lodge. I gave pause for thought when I realised that those I knew happened to have family members who were victims of loyalist and/or state violence in north Belfast. These included one whose teenage sister was blasted to death with a point-blank gunshot to the face and another whose father was assassinated in front of him during Sunday dinner by agents of the state. Then again, of the two close friends I was with, the teenage best friend of one (another member of St Enda’s) was burned alive with his mother when loyalists poured petrol in through the letterbox of the family home before setting fire to it; and the teenage uncle of the other was kidnapped and shot by yet another state-controlled ‘asset’. His body was dumped in the mud a few fields from the clubhouse.

Furthermore, the anniversary of Gerard’s death falls on the same date as a relative of my grandfather’s who was murdered 40 years ago. He was snatched when his taxi was stopped at a loyalist checkpoint – unhindered by the ‘security forces’ – on a main Belfast road. The loyalists dragged him to a local drinking den and tortured him for hours in front of all the customers before pumping seven bullets into him when they were done. Again the police response was dire. 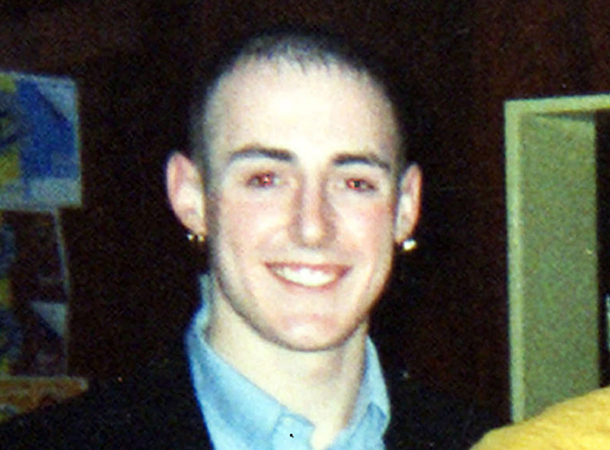 My friend also reminded me that, like Gerard, we had just left the Bellevue Arms when three loyalists attacked a friend of mine who was on his own. They may not have seen me as I was leaving a girl home about 40 yards away when I heard him scream in pain. He had been battered from behind, onto the ground and then set upon by the three of them. One was stabbing at him with a knife so by the time I got to him he had sustained deep defensive wounds to his arms and legs that would require nearly 60 stitches. As I stood over him, they then came at me and tried to slash my throat and face. Unlike Gerard, I was very lucky that they were only armed with a knife and were particularly cowardly when they had to face someone rather than beat them from behind. I was able to fend them off and chase them away. If they had been older, more experienced and larger, though, we would have been killed. As it was, I was very fortunate to need only 28 stitches for the main knife wound from my ear, across my jawline to my chin. I was 20 at the time.

The facts of Gerard Lawlor’s murder were expertly presented and contextualized by Niall Murphy, a partner in Kevin Winter Solicitors. Niall was a team-mate of Gerard’s and now represents the Lawlor family as they fight for truth. The witness testimony and Niall’s factual submissions spoke of a journey with the police that many of us gathered there knew well:

The families then suffered the same standard of service from the bungling Mountie, Al Hutchinson, the former Police Ombudsman, whose office was set up specifically to hold the police accountable. Either Al fell asleep at the wheel or his office was influenced by the police force he was investigating. Either way, the family still await a final report after three others were rejected due to error and inconsistencies on the part of the statutory body.

Nevertheless, what was more depressing was that Gerard was murdered four years after the signing of the Good Friday Agreement and his murder was investigated by the ‘reformed’ PSNI. We had been promised a new era for policing just a few months before and yet here we were faced with the same failings that our community suffered under the Royal Ulster Constabulary. These were the exact same experiences shared by the McGurk’s Bar families from 1971 and the Loughinisland families from 1994.

What was eye-wateringly obvious too as we left St Enda’s clubhouse was that, yet again, information management and management of police agents has determined the perverse lack of response by the authorities. The family believes that one of the two loyalists responsible for Gerard’s death was in the pay of the PSNI. After listening to the community inquiry, few could argue that this is where the truth is leading.

Ciarán Mac Airt is author of The McGurk’s Bar Bombing: Collusion, Cover-Up and a Campaign for Truth (out at the end of this month). Ciarán’s grandmother was one of the 15 people murdered in the McGurk’s Bar Massacre in north Belfast by the UVF on 4 December 1971.