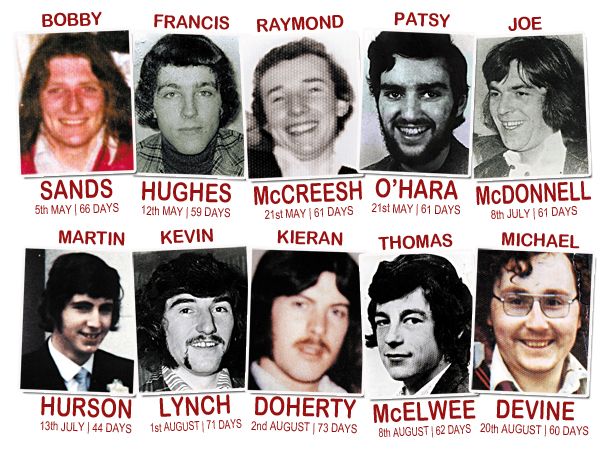 A lasting tribute to the sacrifices of Ireland’s patriot dead will be a New Republic based on the vision of Wolfe Tone, the values of the 1916 Proclamation of the Irish Republic, and meeting the needs of the Irish people to triumph over this age of austerity.

THE National Hunger Strike Commemoration is a special time when we pay tribute to those who gave their lives in prison, those who endured prison, and their comrades, families and communities beyond the prison walls.

Every other day — wherever we are, whoever we are and whatever we do — as republicans we should pay tribute to their sacrifices by our deeds to bring about the sort of society they gave their lives for.

As Bobby Sands said: “Everyone, republican or otherwise, has their own particular part to play. No part is too great or too small; no one is too old or too young to do something.”

The Hunger Strikers and their comrades have been described as ordinary people thrust into extraordinary circumstances but they displayed incredible courage and fortitude in the face of a brutal prison regime and a merciless Westminster Government under Margaret Thatcher.

In this issue, An Phoblacht talks to a brother of Hunger Strike martyr Kevin Lynch from Dungiven, County Derry, the venue for this year’s National Hunger Strike Commemoration.

“When the anniversary comes around, I feel a sense of pride in Kevin as well as sadness in losing a brother and friend. I believe that the Hunger Strikers had no choice. Apart from enduring horrendous conditions for years, the British Government was attempting to criminalise them and our entire history. Margaret Thatcher failed and she failed miserably.”

“Today I believe there have been massive strides made towards a united Ireland through great sacrifices and compromises. I know some people constantly talk about what has not happened as opposed to what has but I tend to look at the positives and achievements. I think republicanism is stronger now than ever before and we are closer to achieving the goals of uniting Ireland.”

Today we see Establishment politicians, bankers and financiers who lecture us about us making sacrifices ‘for the common good’ and appeal to our patriotism but who wheel and deal, connive and plot in the corridors of power to do what is best for them.

The courage, fortitude and selflessness of the Hunger Strikers and their families stands in stark contrast to the financiers who have lined their pockets at the expense of the Irish people and millions more across the globe.

A lasting tribute to the sacrifices of Ireland’s patriot dead will be a New Republic based on the vision of Wolfe Tone, the values of the 1916 Proclamation of the Irish Republic, and meeting the needs of the Irish people to triumph over this age of austerity.

The Hunger Strikers and their comrades played their part; it is up to us to play ours.