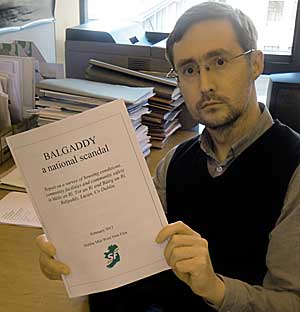 Heralded as a model sustainable community, Balgaddy was mired in planning and building controversy from the start

MÉILE AN RÍ, Tor an Rí and Búirg an Rí are three estates of 465 social houses and apartments built on the border of Clondalkin and Lucan in west Dublin between 2004 and 2007. The estates are locally known as Balgaddy.

Heralded as a model sustainable community, the housing development was mired in planning and building controversy from the start.

From an early stage, residents complained about the poor condition of the housing, the lack of adequate community facilities and, more recently, an increase in anti-social behaviour.

In February, Dublin Mid-West  Sinn Féin published a report on housing conditions in the area based on a door-to-door survey completed by 121 houses (a 26% response rate).

Nine out of ten (91%) respondents who were experiencing problems said that they had reported the problems to the local South Dublin County Council; 67% described the council’s response as ‘bad’ or ‘very bad’ while only 14% described their response as good or very good.

The report also dealt with residents’ concerns on issues of anti-social behaviour and community facilities in the area.

A majority of residents do not feel that the area is adequately served with community facilities, with a particular concern for the lack of facilities for children and teenagers.

While it is clear that South Dublin County Council has directed a considerable amount of resources into addressing the housing problems in Méile an Rí, Tor an Rí and Búirg an Rí, the results of the survey demonstrate that persistent and widespread problems remain.

Dublin Mid-West Sinn Féin has made a number of recommendations to South Dublin County Council to remedy the housing and other problems in the estate.

The first is that a comprehensive survey of all 465 dwellings in Méile an Rí, Tor an Rí and Búirg an Rí be carried out by South Dublin County Council to ascertain the full extent of the housing problems in the area - these surveys should focus on the key issues raised in the independent consultants’ reports of 2009, 2010 and 2011.

The second is for a dedicated estate manager to be appointed by South Dublin County Council with a weekly presence in each of the three estates to oversee the programme of works that emerge from the comprehensive survey and to remain in post until such time as the level of maintenance returns to what would be considered normal levels.

The third is for South Dublin County Council to seek  additional funding from the Department of Environment to cover the cost of works of a structural nature over and above the ordinary remedial works required for the normal management of a social housing estate.

There is also a need for a dedicated Community Safety Forum be established for the estate bringing together on a monthly basis representatives from the local community and senior management from South Dublin County Council, youth services, the Garda, and other relevant agencies. The purpose of the forum would be to develop and implement a programme of work aimed at improving activities in the area for young people and at addressing anti-social behaviour.

The residents in Méile an Rí, Tor an Rí and Búirg an Rí have a right to live in good-quality accommodation, free from fear of anti-social behaviour and served with adequate community facilities.

Dublin Mid-West Sinn Féin will continue to campaign with the residents of Balgaddy until these very basic conditions are met.