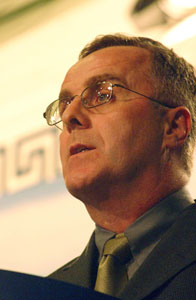 SINN FÉIN is seeking an urgent meeting with Justice Minister David Ford to raise “serious concerns” about the treatment of prisoners in Maghaberry Prison.
The matter has already been raise with the minister by Sinn Féin President Gerry Adams. “Prisoners have rights which must be protected. They are entitled to be treated with respect and dignity,” said Adams.
Gerry Adams was speaking after a Sinn Féin delegation - including elected representatives Caral Ní Chuilín, John O’Dowd, Paul Maskey and Raymond McCartney -  visited Maghaberry to view conditions and meet with prisoners last Friday afternoon. Accompanying the MLAs was Coiste Na nIar Chimí representative Michael Culbert. The delegation will be reporting back to the party’s Assembly group.
Gerry Adams said he was also inviting relatives of prisoners and their organisations to meet with Sinn Féin to discuss this issue. “I have spoken to the Minister for Justice, David Ford, on this matter and have raised my concerns with him. I intend meeting him again on this,” said Adams.
Adams informed Ford that a number of Sinn Féin MLAs wanted to visit Maghaberry to meet with prisoners and view conditions within the jail. Sinn Féin representatives have previously visited Maghaberry and the women’s prison now located at Hydebank.
On May 12th, Sinn Féin met with David Ford’s aide, Richard Good, to finalise arrangements for the delegation to visit Maghaberry. Caral Ní Chuilín and Raymond McCartney also met with Robin Masefield, Director of the Prison Service, in advance of going to the prison.

CRITICAL REPORTS
Maghaberry has been the focus of a series of critical reports over a number of years.
Last year, the prison governor and his deputy were dismissed and 17 members of staff disciplined following an inquiry into the suicide of a prisoner.
A new governor, brought in last July to implement reform, faced open hostility from staff and resigned after five months amidst allegations that his safety had been deliberately jeopardised by members of the prison staff.
Earlier this year, increasing tensions between staff and prisoners culminated in protests by a number of segregated prisoners, including a 48-hour lock-in of prisoners during Easter.
Recently relatives of some of these prisoners have been in contact with Sinn Féin representatives in relation to the situation in Maghaberry.

SINN FÉIN VISIT
Visiting Maghaberry on May 14th, the Sinn Féin delegation had access to the segregated wing and met with ten prisoners representing various groups within Roe House. The delegation also met with the current governor, Alan Craig, and other members of the administration.
Speaking after the visit, Raymond McCartney described the meeting with Roe House prisoners as “a very positive engagement” in which the men had outlined their concerns.
McCartney said:
“A range of issues were raised by the prisoners. They included complaints about a number of punitive actions such as the use of strip-searching as harassment of both prisoners and their visitors and a range of other conditions-related issues that were very familiar to the former prisoners on the delegation.
“It was clear that, with the right political will, all of these issues could be resolved. The delegation discussed all of this with the ten prisoners we met and assured them their concerns would be conveyed to the prison administration, the Prison Service and to the Justice Minister.”
Amongst the issues raise by the prisoners was the use of strip-searches as a means of harassment. The prisoners cited one clear example of this. Despite the fact that it was obviously unnecessary, prisoners appearing by video link for remand were being subjected to strip-searches.
A number of other issues were also raised concerning the harassment of visitors. These included the proximity of dogs in the visit processing area, the presence of the PSNI in the visitors’ area, the public identification of those who are to be strip-searched, and visitors being threatened with arrest if they refuse to be strip-searched.
Prisoners also raised issues of access, particularly the practice of forcing segregated prisoners to eat their meals in the cells.
McCartney said:
“The delegation also met with Liam Hannaway, whose health has become a matter of concern. Liam outlined his concerns, all of which centred on prison conditions and procedures. It was the firm belief of the delegation that all of these issues could be satisfactorily dealt with by the governor.”

REQUEST
The delegation had requested to meet with Harry Fitzsimmons, a prisoner being held in isolation, but this did not happen due to a misunderstanding.
“Harry’s lawyer contacted me on Saturday to explain the situation and assure me that his client was not in any way snubbing the delegation. The delegation had sought to visit Harry after his family raised concerns about his health and well-being,” said McCartney.
It has also been reported that Harry Fitzsimmons has been subjected to physical assault by members of the prison staff.
“After our three-hour meeting with the prisoners, the delegation met with the governor again to outline their concerns and suggestions. In the coming period, Sinn Féin will meet with the director-general of the Prison Service, and with representatives of the prison administration as well as the Minister for Justice, David Ford, regarding our deep concerns about the current situation for prisoners and their families in Maghaberry,” said McCartney.

FOCUS
Conditions and practices in Maghaberry jail have been the focus of repeated criticism over a number of years.
In 2006, an inspection made over 155 recommendations but more than half were never implemented. The most recent inspector’s report made over 200 recommendations and concluded that the current situation in Maghaberry could not be allowed to continue.
In 2009, both the governor and his deputy were dismissed after the death of a prisoner on suicide watch. Video footage showed staff lying on beds and watching television instead of monitoring those deemed at risk of self-harm.
A governor brought in from England to implement reforms in July last year resigned within five months after his personal details were allegedly “leaked” by prison staff. The allegations are under investigation by the Police Ombudsman.

• As ‘An Phoblacht’ goes to print on Wednesday afternoon, we have received news from Raymond McCartney, which he received from a third party, that a threat to the life of Liam Hannaway has been lifted. This news has been conveyed to Liam’s family and the Prison Service. Raymond McCart-ney said he hopes this will facilitate the end of Liam Hannaway’s isolation.

Maghaberry: The prison has been the focus of a series of critical reports over a number of years