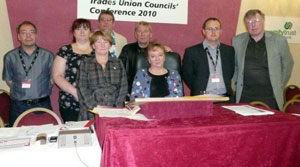 TWO relatives of people killed by the British Army in the Ballymurphy Massacre were campaigning in Blackpool at the weekend as guests of the Annual Conference of Trades Union Councils.
Irene Connolly is the daughter of Joan Connolly, mother of eight, shot eight times whilst helping another victim; Eileen McKeown is the daughter of Joseph Corr (43), father of seven, shot whilst walking with his son and died two weeks later.
They were urging support for a motion backing their campaign for an independent investigation into the killings.
The motion was put on the agenda by the West Midlands County TUC and originally proposed by Coventry Trades Union Council. They spoke at a fringe meeting organised by Coventry TUC. Delegates at the fringe meeting were so moved by the Ballymurphy story that they negotiated for Irene Connolly to speak to the main conference. She was given a standing ovation and the delegates went on to unanimously support the resolution for a full independent investigation into the killings.
The relatives will not accept an inquiry under the Inquiries Act 2005. It would be controlled by the British Government and therefore not independent as British soldiers carried out the atrocity.
The Ballymurphy 11 were murdered during the first three days of internment in August 1971 by the 2nd Battalion of the British Army’s Parachute Regiment. This same regiment went on, five months later, to murder 14 civil rights marchers on Bloody Sunday in Derry.
No one was ever brought to justice for murdering the Ballymurphy 11, who were killed over three days in their own area. All of the victims were unarmed civilians and the relatives want truth and justice.

VISIT TO BELFAST
Coventry Trades Union Council became involved in the Ballymurphy campaign as a result of one of their members attending the Troops Out Movement’s annual delegation to Belfast. They have given tremendous support to the campaign since, reflecting the long-term value of fact-finding visits.
The delegate stayed with one of the families and invited campaign members to come over to Coventry to tell their story. As a result of this they have taken the campaign into the wider trade union movement. At the end of the Trades Councils Conference, the TUC agreed to write to all trades unions urging support for the Ballymurphy campaign and to lobby MPs and MEPs.
An Phoblacht
44 Parnell Sq.
Dublin 1
Ireland