Celebrating 'The Women of Struggle' 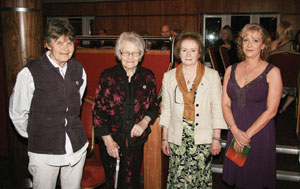 “A VERY comradely initiative” is how guest speaker Barry McElduff MLA described Ógra Shinn Féin’s ‘Celebrating the Women of Struggle’ dinner dance in Strabane on Saturday night.
The event attracted a large crowd from across Ireland, friends and comrades who had gathered to pay tribute to the women on the Roll of Honour, to their families and a number of honourees.
The women honourees on the night were Susan McGillion, Rose Dugdale, Padraigín Uí Mhurchadha, Eibhlin Glenholmes, and a posthumous presentation to the family of Paula Murphy.
Chaired by Ógra National Gender Equality Officer Gemma McKenna, the proceedings on the night got underway with a fáilte from National Organiser Donnchadh Ó Laoghaire. Maureen McGuinness then read a beautiful rendition of ‘Invisible Women’.
Ógra’s very own ‘Bard of Armagh’, Liam Lappin, sang ‘Four Green Fields’ before the main speaker of the night, West Tyrone MLA and famous former corner forward for Carrickmore, Barry McElduff, took to the mic.
Barry commended Ógra for the event and went on to pay tribute at length of the hugely important roll that women have played in Ireland’s freedom struggle.
He recalled his experience in working with extraordinary women like Mairéad Farrell and he also spoke of his huge fondness and admiration for the honourees.
The subject of volcanic ash and the hassle it is creating for air travellers nowadays but, Barry pointed out to rapturous applause, he noted that Rose Dugdale was certainly not hampered by volcanic ash on her last ‘flying visit’ to Strabane!
Saoirse O’Neill was next, reading the Republican Women Roll of Honour, which was followed by presentations to the families of the women.
Brief bios were read of each of the women being honoured and they were each presented with a small token of appreciation from Ógra Shinn Féin.
A big four-course meal followed the presentations and the night was brought to a lively conclusion with music by ‘Paddywagon.
Speaking about a hugely successful event, Ógra activist Barry McColgan said:
“The inaugural ‘Celebrating the Women of Struggle’ dinner dance was a huge success. It was an honour to host the families of the women on the Roll of Honour and the honourees.
“They deserve the recognition, admiration and ongoing solidarity of all of us. Everyone had a great night and we would like to thank everyone who assisted in any little way.
“Ógra are committed to ensuring that this becomes an annual event as a focus on bringing the issue of gender equality to the fore and also ensuring that the many stories of women in struggle are told and more and more republican women’s sacrifice and hard work is honoured.”