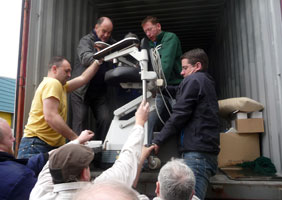 A GROUP of volunteers from Dublin Sinn Féin gathered in Inchicore to help load a container of hi-tech medical equipment destined for Cuba worth an estimated one million euro!
Comrades from many cumainn were represented and the group was accompanied by Cuban Ambassador Teresita Trujillo and Sinn Féin Vice-President Mary Lou McDonald, who took the time out to help.
The noble task had an added urgency and a deadline of two hours as the freight company would charge extra money per hour for any delay after that time. The comrades organised in an enthusiastic and positive way to fulfil the task. The medical equipment had been gathered over the previous year by Dr David Hickey, a medical surgeon in Beaumont Hospital and selector for the Dublin GAA football team.
David Hickey explained to the volunteers that this equipment had been salvaged from the wasteful Irish health system and would have been destroyed. The equipment would be of immense help to his colleagues and to the many patients in need of medical treatment, he said. He has sent many other containers.
Using a human chain, the volunteers filled the container in record time and when the doors of the container were finally closed, the Cuban Ambassador spoke to the group, thanking them for their efforts on behalf of the Cuban people and government.
“On behalf of the Cuban people and government, I would like to thank Sinn Féin and the Irish-Cuban Medical Association, led by Dr David Hickey, for all the hard work and efforts to send this important donation of medical equipment to assist the Cuban health system keep its high standards in spite of the effects of the US blockade of my country for over 50 years.
“The contents of the donation will go directly to our health system and will have an impact in better services to the population.
“This is another significant show of solidarity and friendship from the people of Ireland that Cubans will highly appreciate and will strengthen the bonds between two nations with a similar history of struggle and resilience.”
David Hickey also thanked the group, emphasising that the medical equipment would get to those most needy and would make a big impact on the lives of people in need of medical treatment.
Mary Lou McDonald thanked the Sinn Féin members for all their ongoing work and support for the Cuban people.
Dublin Sinn Féin had raised the funds to pay for the cost of the container and the shipment could be guaranteed. This effort by Dublin volunteers is part of an ongoing solidarity shown to the Cuban people by Sinn Féin members and leadership.
Sinn Féin’s continuing initiatives with Cuba include the Bobby Sands Memorial Hike to Cuba’s Sierra Maestra, which will be launched this Thursday, May 20th, in the presence of a high-level Cuban delegation visiting Ireland at the invitation of Sinn Féin. The delegation will also travel to Belfast to participate, as special guests at the Cairde Sinn Féin event where they will meet Sinn Féin President Gerry Adams.

Sinn Féin’s continuing initiatives with Cuba include the Bobby Sands Memorial Hike to Cuba’s Sierra Maestra, which will be launched this Thursday, May 20th

Memories in Cuba of Che and Bobby Sands

AROUND this time last year, my eldest daughter, Úna, called into our home, as she does most days, on what I assumed a routine visit. It was anything but. She was singing “Guess where we’re going?” She then reached for travel documents for a trip to Cuba. Che Guevara is someone who inspired me as I was growing up, so you can imagine my surprise and delight at the prospect of the trip of a lifetime.
A year on, at 4:30 Cuban time, we landed at Habana Airport for the most amazing seven-day holiday. At this stage I would like to express my heartfelt thanks to my daughter, Úna, for such a magic holiday and Gerry Adams, Padraig Wilson and Niall Connolly for their help in arranging meetings with Cuban officials.
We spent the first night in the hotel relaxing and then, on the Thursday morning, we took a trip to the Plaza de Revolution. The next few days were spent visiting many other sites and museums, too many to name. Indeed I could write several books about my memories
On Tuesday, May 4th, I was invited to Communist Party headquarters to meet Noel Carrillo. Noel had been ambassador to Ireland and I had met him briefly while he was in Derry a few years ago. He spent over an hour briefing myself and Úna on his government’s plans for the future, a meeting that was well worthwhile.
He then told me that he had arranged a meeting on the following day, May 5th, with Maria Aleida Del Riego Diaz at the Instituto Cubano De Amistad Con Los Pueblos. Next day, we went to the Institute at 10am and met Maria and a number of her officials. After a short meeting, Maria asked me to attend a commemoration at the Hunger Strike Monument. We, of course, were delighted and honoured to attend.
We walked the short distance from the institute to the Hunger Strike Monument and were met by a crowd of people. I was invited along with a member of the Cuban delegation to lay flowers there. It was a humbling experience. Maria then spoke to those present. She introduced me and asked if I would like to say a few words. I was totally overwhelmed by the experience and was barely able to speak. Anyone who knows me knows it is very difficult to get me to stop speaking but on this occasion I was so choked, I barely got a few words out.
Even now as I write, I find it hard to take in that, on the 29th anniversary of Bobby’s death, I was standing speaking at a commemoration in Cuba marking his and his comrades’ sacrifices.
After the commemoration I had the privilege of being introduced to the people who live beside and tend to the monument. To those people I would like to offer my deepest thanks and indeed the thanks of all republicans.
If I had one regret about my trip to Cuba, it would be that time did not allow me to visit Che Guevara’s grave. However, it provides the opportunity for a second trip to Cuba, and hopefully my wife Eileen can accompany me on this return visit.
Venceremos!