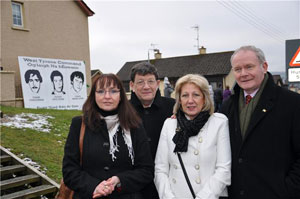 Several thousand people turned out at a commemoration parade in Strabane on Sunday to mark the 25th anniversary of the deaths of local IRA Volunteers Charlie Breslin (aged 20), and brothers Michael Devine (aged 22) and David Devine (aged 16), who were summarily executed by British State Forces in a pre-planned shoot-to-kill operation in a field overlooking the Head of the Town area of their hometown in the early hours of 23 February 1985. The parade was part of an extended weekend of events organised by the Breslin/Devine Commemoration Committee in conjunction with the Strabane Memorial Flute Band, which was formed by local people and friends of the three local IRA volunteers in the wake of their deaths.
Led by a colour party and with seven participating bands, the parade left Drumrallagh and made its way to the Volunteers’ Monument at Fountain Street, where commemoration proceedings took place.       Members of both the Breslin and Devine families thanked the people of Strabane for standing shoulder to shoulder with them over the last 25 years and said that this solidarity had given them the strength to get through the many long years since the deaths.
Guest speaker Martin McGuinness said that the terrible events of 25 years ago were a direct result of the shoot to kill policy ordered by Margaret Thatcher.  He said that David, Charlie and Michael were young people who had everything in life going for them but instead choose to fight back against British state oppression and the attempted imposition of second class citizenship upon the people of Strabane and other republican and nationalist communities throughout the Six Counties.
He said that they were committed Irish republicans and the massive turnout to commemorate their memory 25 years on was undoubtedly of great comfort to the Breslin and Devine families.
In a message to the Orange Order Martin McGuinness said: “The days of the Orange State and second class citizenship are over and the Orange Order must sit up and take notice that the world is changing all around them and they must recognise that the days of triumphalist Orange marches through areas where they are not wanted have to be consigned to the history books forever.”
The parade continued through the other areas of the town to the Scór Site in the town centre where a band competition took place followed by a buffet, annual quiz and music in Katy Daly’s.
The extended weekend of commemoration events began on Friday night when over 300 people attended a dinner dance in the Fir Trees Hotel to coincide with the 25 Anniversary of the formation of Strabane Memorial Flute Band. This memorable night also saw the launch, in preview format, of the commemorative DVD Twilight Graves, which features interviews with family and friends of Charlie, Michael and David, original TV footage from the time and as well a range of additional material. The full length version of  Twilight Graves is now available for sale at a cost of £12 and hundreds have already been purchased.
Such was the demand that the major commemorative exhibition in memory of Charlie, Michael and David held in Fountain Street Community Centre had to be extended from Saturday, Sunday and into Monday.  People came from near and far to view the exhibition, which combined family memorabilia of their loved ones with photographic and newspaper accounts of their deaths and subsequent events. The exhibition also saw the display of the Relatives for Justice Remembrance Quilt, which is made up of squares of material designed and made by family members in dedication to those who have been killed through state and state sponsored violence.
Events continued on Monday with an anniversary mass in the Church of the Immaculate Conception in Strabane and concluded on Tuesday 23 February with a candlelight vigil at the Volunteers’ Memorial 25 years to the day of the summary execution of Charlie, Michael and David
The Breslin/Devine Commemoration Committee would like to take this opportunity to thank everyone who has contributed in any way to the major success of the commemoration events and in ensuring that fitting tribute is paid to the memory of Charlie, Michael and David.

Part of the large crowd;  Wreaths were laid in honour of the three IRA Volunteers (below)