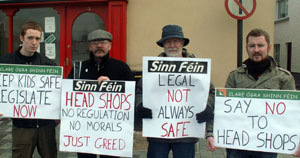 Some of the activists at the Ennis protest

Sinn Féin representatives and activists across the country have been picketing so-called Head Shops to raise public awareness of the threats posed by the products sold by the shops and of the lack of legislation to regulate them.
Sinn Féin activists held a protest outside one of the two headshops in Ennis, County Clare on Monday last. Ennis party spokesperson Seán Hayes accused the government of sitting on their hands. “Does someone have to die before they will move against headshops?” he asked.
In Bandon (left), County Cork, Councillor Rachel McCarthy earlier this month led a protest at which she demanded the closure of all ‘legal high’ stores across Ireland and called on the government to control the production of these drugs by making them illegal with immediate effect.
“Undoubtedly these so called Head Shops must be subject to new and robust regulation,” she said. “At a minimum we must put in place robust guidelines as to how these products are packaged, marketed and sold. The bigger and more important battle is to successfully educate people about the dangers of these products and drugs generally.”
An Phoblacht
44 Parnell Sq.
Dublin 1
Ireland