What we're about, we can achieve 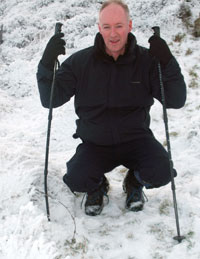 DECLAN MURPHY: Fit for the challenge

There are four themes to this year’s Sinn Féin Ard Fheis, which takes place in the RDS in Dublin on Friday 5 and Saturday 6 March. Speaking directly to the recession and government handling of the economic context in Ireland are the subjects of ‘jobs’ and ‘fairness’ and addressing the core principles of the republican struggle are the topics of ‘equality’ and ‘unity’.  Sinn Féin Leas Ard Runaí Declan Murphy is upbeat about the two-day conference, seeing this phase as a strong and successful period for Sinn Féin. “A lot of people, including myself”, Murphy says, “are upbeat going into this Ard Fheis because of the success of the recent negotiations in Hillsborough. Our negotiators have shown great strength of leadership during the talks.”
For a party that often contends with an at-best indifferent and, at worst, hostile national media, Declan identifies the annual national conference as an opportunity to get the republican message out. “The Ard Fheis is an opportunity for us to put our party policies out there. And particularly during the live session when we will have an uninhibited opportunity for party activists and spokespeople to state clearly what our policy positions are – policies on issues like the economy, job creation, NAMA, the Peace Process and Irish unity. We don’t often get that kind of media opportunity, particularly in the South.”

MEMBERSHIP MOTION
Among the motions to be put to the Ard Fheis this year is one proposing a constitutional change that could facilitate increased party membership. Murphy believes this to be one of this year’s most important motions.  “One particularly interesting motion, which hopefully will be successfully passed”, he says “is the motion on the rules governing membership. We have a lot of supporters who haven’t the time, or maybe circumstances don’t allow them, to commit to membership of a cumann with the meetings and the additional work involved. What happens then is that people who help us from time to time can’t join the party because we haven’t been providing them with the opportunity to do so. These people drift away and we’re certainly not realising our full membership potential. This motion, if passed, would involve making a change to the constitution to allow activists to be members of Sinn Féin without having to join a cumann.”
This motion, Declan says, is basically about “building the party, north and south.
“It’s highly important that people debate this issue and vote on it,” he says. “Our current rules have narrowed down the opportunities for people to join the party. People can fall by the wayside. We need to open up our membership, but it’s not about opening the floodgates either. We have a set of objectives, and an ideology. We have to make sure that the people we bring in adhere to our objectives, rather than maybe attracting people who are just looking for a career.”
The hunger strikes of 1980 and 1981 marked a period of huge increase in the number of activists who became involved in the struggle. The party reached out and opened its doors to a vast spectrum of Irish society. But, as Declan points out, that increased membership wasn’t harvested to full capacity and some of the activists of the time drifted away. “One of the biggest complaints you’d hear after the 1980 and 1981 hunger strikes”, the former POW says, “was that we didn’t harness properly the support we were getting back then. You were either a fully-fledged member or you weren’t. The motion at this Ard Fheis can redress that. The bottom line is that we’re far too small as a party as things stand. So we have to open it and build up our ranks –  as Bobby Sands said ‘no part is too big or too small’. There is no doubt but that in the past, for centuries, we’ve been fairly exclusive.”

GUEST SPEAKERS
Sinn Féin has, however always looked beyond Irish borders. The international guest speaker this year is Warren Allmand, the former Attorney General for Canada. Other international guests will be at the Ard Fheis to represent the South African, Palestinian and Basque struggles.
Amongst some of the prominent themes of the Ard Fheis are – ‘on the road to economic recovery’ to be addressed by Pádraic Mac Lochlainn.  Gerry Kelly with Gráinne Mhic Ghéidigh will speak on Irish unity and how to use the political institutions to take things in that direction and Martin Ferris will outline Sinn Féin’s opposition to the proposed cut to the minimum wage.
Bairbre de Brún will look at the overarching issue of climate change and the Irish Trade Union Movement will be represented by SIPTU General President Jack O’Connor. The level of general public interest in this Sinn Féin Ard Fheis is reflected by the fact that over 20 NGOs have applied to set up stalls at the event.

FRINGE MEETINGS
Three fringe meetings are planned for the Ard Fheis. “There’s a number of fringe meetings”, Declan says, “One is for youth – for young members of the party. Then we have the international fringe meeting and to, mark International Women’s’ Day, there will be a launch of the Sheena Campbell book, Dancing to the Revolution.
In a change to the usual time, the presidential speech will this year take place at 8.30pm on Saturday, which will maximise the media coverage since that’s a prime viewing time.
So what should we expect to take away from this year’s Ard Fheis?  Declan, who spent 16 years in prison for his republican commitment, says, “Our activists are feeling that what we’re about is achievable.” Murphy believes the membership is up for the challenge.

The 2010 Sinn Féin Ard Fheis will be broadcast live on TV on Saturday 6 March.
Sinn Féin representatives and activists  from across Ireland will address a range of issues, from the Hillsborough Agreement to the economic crisis, between 11am and 1pm on RTE 1 and BBC.
The Presidential Address by Gerry Adams will be broadcast live at the new time of 8.30pm on Saturday evening on RTE 1.