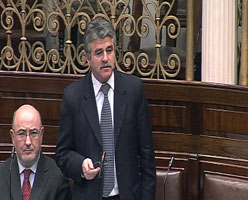 Now we really have a banking crisis, and an investment one, as well as a job creation emergency. But for the coalition government and key parts of the Irish investment and banking community, we only have a property investment problem.
The failure this week of Bank of Ireland to meet a key commitment to pay a €250 million euro dividend to the Irish taxpayer is just another instalment in the botched Fianna Fáil and Green Party reaction to the economic crisis, caught aptly by the last minute disclosure that BoI would miss their payment commitments and that the government were happy enough to take a shareholding in the bank.
On Monday of this week the value of that holding fell by 6%, and on Tuesday another 6% fall was registered. Yes, share prices can go up, but right now, our tax euros are being flushed into failed banks run by failed executives with a failing myopic government.
Sinn Féin’s Finance spokesperson, Arthur Morgan, summed up the debacle at the weekend when he said that, “the government must stop throwing good money into a black hole. Every move that they have made so far has been a disaster. We cannot allow the government’s banking policy to hurt our economy any further”.
On Monday this week the Irish taxpayer owned 16% of BoI, this does not include the massive €3.5 billion already lent to the bank and the state already has 25% preference shares in the bank. If BoI do not repay this investment within four years the preference shares become ordinary shares. As An Phoblacht goes to print the actual market value of BoI is just over €1 billion.


Nationalise not NAMAise
The case for nationalisation has never been greater. Arthur Morgan argues that had the coalition government “nationalised rather than capitalised as Sinn Féin had advocated then we would not now be in this mess and small and medium businesses would have access to credit which would in turn lead to more jobs”.
Morgan also said that “the government’s banking policy now lies in tatters. Bank of Ireland and Allied Irish Bank must now be nationalised and NAMA must be discontinued before it starts taking on the toxic debts of Ireland’s banks”.
There is still time to put the brakes on NAMA, the scheme has still not received full EU approval, and there are ever more warning signs that the strategy is the wrong way to go for the wider economy.
One example is the case last week of former development sites in Athlone which had been valued four years ago at €31 million. Last week, BoI claimed in the Commercial Court that the land now only had a value of €600,000. In another case development lands near Sallins County Kildare once valued at €17.5 million were now only worth €4 million.
If these devaluations are anyway indicative of the true value of the toxic debt in Irish banks, then NAMA valuations will be a joke.


DAVY investment report
There is also the still unanswered question of what will the NAMA assets actually be useful for? A Davy Research report published last week shows that putting any more money into these sites, some of which are only agricultural land, is pointless.
The Davy Report headline baldly states a truth that few in the Irish government want to face up to. It reads “Years of high income largely wasted”.
The report says that “Ireland misallocated” investment in the years 2000 to 2008” through “rampant investment” in housing and other buildings.
According to Davy, “housing alone accounted for 63% of the net investment” during this time. Another significant chunk of the investment made in this period was in the “import-intensive area of retail, transportation and storage”.
Davy notes that the “collapse of consumer spending” means that this mainly foreign owned and “not technologically advanced” infrastructure is currently redundant. We made it easier to import into our economy and most critically our shops but did not do enough to help Irish businesses get to the shop floor or export markets.
At the same time as we were building too many overpriced houses, there was too little investment in infrastructure such as “roads, rail, schools, hospitals and telecommunications”. Davy describes the private sector investment into buildings, equipment and new technologies as “pitiful”.
The Davy report is all the more critical as one of the key elements of the recession has been the fall in investment. Yes, there is a lot less house building, and in the long term there will hopefully never be a return to the building bubble boom, if only for the issues about the quality of the housing stock that was actually built.
However, investment spending is not just about new houses, it is about new schools and hospitals, businesses growing and developing buying new machinery, equipment and training workers, all of which has been in decline since the middle of 2008.
All of this brings us back to the question of NAMA. Why is the state investing so much money, funding debts that are effectively worthless and of little value to where the economy is going unless new schools and hospitals are to be built on these redundant housing and retail sites? How many new jobs will NAMA create in the coming years?


80% of jobless still unemployed
Outside of the cosy pampered world of Irish banking, new employment data from the Central Statistics Office (CSO) show a different, harsher reality.
The CSO produced this week an analysis of the people who signed on the live register in the first three months of 2009. They found that just 18% of the new unemployed found a new job and that nearly 60% were still jobless halfway through the year. The other 20% had either left the state, returned to education or become self employed.
The CSO figures also found that more than a quarter of the new people signing on were under 25. At the end of 2008 the under 25s were 12.5% of the workforce and so during 2009 were disproportionately likely to lose their jobs.
Finally and perhaps most critically is the question of how are the major banks being run now that the taxpayer is picking up the bills. Well it seems to be the same old secrecy, practiced by the same old executives and the same old cabinet, give or take the last week’s substitutions.
Take one last example of an advertisement campaign being run by BoI claiming that they are saying “yes” to 100 mortgage applications a day. Well if this figure was applied to Irish Banking Federation data for the last quarter of 2009 that would mean that BoI had 60% of the loan market, which is strange as the figures show a 40% share for AIB and 35% share for the EBS, so once again someone is misleading us.
Paying the bank bills doesn’t seem to give us any control or insight into this sector, it does give us the same old public relations propaganda.