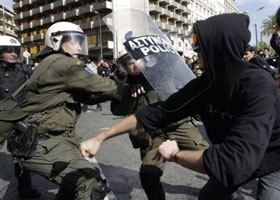 “All euro area members must conduct sound national policies in line with the agreed rules”. This was the opening line in a statement from EU heads of government made in Brussels on 11 February. The statement was about Greece and it welcomed the austerity measures being introduced by the errant EU member in an attempt to meet the EU’s demand to bring its budgetary deficit down by 4% in 2010. In other words – commit economic sabotage on itself to fulfill the wishes of an outdated and outmoded economic big brother.
Unlike the Irish government, who are part of the vanguard in the EU cheering on a move to the right in these troubled times – Sinn Féin does not support the actions Greece is being asked to take. Nor for that matter do we support the Irish government’s analysis and approach to our own economic woes. Sinn Féin believes there is a fairer way, a better way, out of the global and domestic recessions.
Let’s examine the opening line of the statement. What is a ‘sound national policy’? The EU, and unfortunately our own government, would have us believe that a sound national policy is one that deflates an economy to the point of depression – imposing serious hardship on its people, curtailing workers’ rights so they cannot infringe on economic decisions and steadily eroding public services so that people are pushed into consuming private services. These private services are usually bought from the state cheaply in a sell-off initiated by ‘sound national policy’.
The Irish government pursued its own brand of ‘sound national policy’ in the Budget when it cut workers’ wages, cut social welfare, health and education funding and in total took €4 billion out of the economy. Both Fine Gael and Labour supported the government’s plans to do this. And here we are now, three months later and the live register is still growing, house prices are still falling, the banks still aren’t lending and our consumption sector is in freefall.
This is the same medicine now being passed onto Greece.
In the financial world’s analysis of this Greek tragedy, a few sound voices are pointing out the lunacy of what is happening. It was the EMU’s one-rule-fits-all policy that caused much of the smaller European economies’ problems in the first place. The access to easy credit by these developing economies, like Ireland and Greece, combined with the loss of monetary control, all fed the bubbles that arose in the PIIGS countries (Portugal, Italy, Ireland, Greece and Spain). The command that every economy stay within the 3% Stability and Growth pact, when different countries have different needs, further damaged economic development. It wasn’t true anyway – the larger countries, for example France and Germany, broke the pact on occasion and suffered no real consequences.
The insistence now that economies bring their domestic deficits back to within this 3% is utter madness. Attempting to reduce a deficit in a time of recession is counterproductive. Deficit reduction should be counter-cyclical (reduced in time of growth and allowed to grow in times of borrowing need) to allow governments the sovereign decision making needed to right an economy in decline. Borrowing for investment should be allowed, if that investment is designed to stimulate an economy and therefore grow it.
Of course, there are always exceptions made by the EU. In the Irish case, workers must suffer pay cuts and those who have lost their jobs must live on less, because we are not allowed borrow to pay for a jobs strategy or societal needs. But we can borrow €54 billion to give to banks for toxic loans as long as we place that borrowing through a Special Purposes Vehicle and keep it off the General Government balance sheet.
The EU and this government have turned Ireland into a debt-servicing vehicle so we can protect the euro. Never mind that we are going to continue to see unemployment rise along with emigration and our public services fall into disarray. And because we have no monetary control over the euro and our main trading partners are non-euro members, they want us to further deflate our economy to make ourselves cost competitive – which means more hardship for people across the country.
Greece faces these measures now and ironically, they are less worse off than we are with regards to debt, when we include NAMA. The problem for the Greeks is that they have become, in economist Joseph Stiglitz’s words, a victim of a speculative attack against their economy. The eyes of the predatory finance markets have fallen on the Mediterranean country and their possible failure to refinance sovereign debt means they are now reliant on the EU to back them up. Which suits the EU just fine because now as well as protecting and preserving the euro, they can decide Greece’s budget decisions and hence political decisions too. Once again we witness a right wing solution to a right wing-caused mess.
An Phoblacht
44 Parnell Sq.
Dublin 1
Ireland