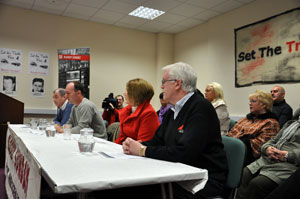 The families of the victims of Bloody Sunday have criticised NIO Secretary Shaun Woodward over a proposed 14-day delay between the Saville Report being handed to the British government and being presented to the families. At a press conference on Tuesday, representatives of the Bloody Sunday Families and Wounded revealed that they have written to Woodward and Lord Saville, asking them to publish the report at the point of delivery.
As the families understand it, Woodward’s intentions are that he will receive the report first – it is due to be delivered on 22 March – and take up to two weeks to scrutinise it for unintended breaches of Article 2 of the Human Rights Act and for potential threats to ‘national security’.
The families are worried that it could be amended or have parts withheld by government agencies.
John Kelly, whose brother Michael was shot dead on Bloody Sunday, said the families are concerned that the report “will fall victim to selective leakage and other partisan usage long before the full report sees the light of day.”
“The Inquiry process, detailed, meticulous and painful as it was, could become a total mess and travesty in the final few weeks before it becomes public.
“We are calling on Lord Saville to set the truth free, and we are calling on Shaun Woodward to agree that Lord Saville should set the truth free.”
Speaking on Tuesday, Martin McGuinness reiterated his support of the families’ demand.
“I have been appraised by the families on the situation surrounding the publication of the Saville Report into the murders in Derry on Bloody Sunday 1972. I share the concerns of the families in that they feel it is imperative that they receive the report at the same time as the British government. In fact, I am of the firm belief that consideration of the families’ legitimate requests should take primacy over any consideration of the British government or its paratroopers who were responsible for the massacre of innocents in Derry on 30 January 1972. The families and their legal representatives should have sight of this report in full.
“The fact is that the Saville Inquiry, as a public body, discharges the same responsibilities regarding the right to life under Article 2 of the Human Rights Act and gives the same consideration to what the British government refers to as ‘national security’ concerns as the government itself. Therefore there is no logical reason for the British Secretary of State to be in receipt of the report 14 days before its publication. Other Inquiries – the latest being the Hutton Inquiry in 2005, despite posing the same concerns around ‘right to life’ and so called ‘national security’ issues, were not subject to this period of examination by government before they were released simultaneously to all interested parties and government. As a public body Saville takes full responsibility in fulfilling the British government’s responsibilities in these areas.
“For the report to be in possession of the British government 14 days is an attempt to give unfair advantage to the British government over the families and is unacceptable. This can only give rise to suspicions of interference and attempts to portray the actions of the British government of the day and its armed forces in the best possible light. This is contrary to natural justice. Openness and transparency is paramount. There should be no proofing or editing of the report before the families have sight of it – only full disclosure of the findings of the Inquiry is acceptable.
An Phoblacht
44 Parnell Sq.
Dublin 1
Ireland