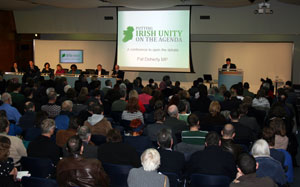 Putting Irish Unity on the agenda

“Irish unity will no doubt have a different meaning in a 21st-century global economy, Ken Livingstone speculated, than when he first campaigned for dialogue with republicans at the height of the armed conflict a generation ago – let alone in the context of a possible breakup of the rest of the United Kingdom, as others suggested from the floor.
“But the conviction voiced by Sinn Féin leaders and SDLP assembly member Conall McDevitt at the London conference that Irish reunification is inevitable is surely right. The crucial question on this side of the Irish sea is whether Britain will help that process or hinder it”
Seamus Milne, writing about the conference in the Guardian on Monday, in an article titled ‘Irish unity is inevitable’