Gifts that are different 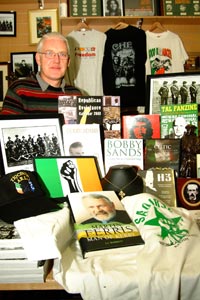 FINDING a present that is different, has some sort of meaning and is actually wanted can be a struggle for even the most intrepid republican activist amidst all the tinsel and tat in High Street stores but there’s a treasure trove of novel gifts in the Sinn Féin Bookshop in Dublin.
From some superb stocking fillers like the cuddly IRISH TEDDY BEAR WITH TIOCFAIDH AR LÁ SLOGAN at €6 for your niece or nephew to the perennial favourite that drives ‘Daily Telegraph’ reader Colonel Peregrine Gusset-Molebaiter stark-staring bonkers, the best-selling REPUBLICAN RESISTANCE CALENDAR (€8), there’s leisurewear for yer man (or yer woman) on Hill 16 in the tasteful Dublin blue ‘DUBLIN, THE CITY THAT FOUGHT AN EMPIRE’ T-SHIRT at just €15. And, just in case the weather turns a little inclement on our emerald isle, there’s cool waterproof jackets at €35 complete with crest and hood.
Often overlooked are the little gems that the Sinn Féin Bookshop has for the little ones at home at Christmas (and we don’t mean Willie O’Dea). Irish Book Awards winner ‘THE STORY OF IRELAND’ is a handy-sized picture-book “rollercoaster ride through Irish history” for younger readers and at just under a tenner is a bargain buy. For those of us brought up on Spiderman and Batman comics (they’re called “graphic novels” nowadays) there’s the brilliant ‘BLOOD UPON THE ROSE - EASTER 1916’, by the talented Gerry Hunt and illustrator BrenB. In glorious full colour, it tells the story of the Easter Rising in a comic-book style that would appeal to anyone but especially to schoolchildren and includes pen-portaits of the leaders, a list of those executed and a map of Dublin’s garrisons and key locations. At €12.99, it’s definitely one for my son.
‘IRISH FOR BEGINNERS’, the Usborne internet-linked guide for complete beginners, is just the job for someone like DUP Culture Minister Nelson McCausland, complete with CD for only €15 so Barry McElduff might pop one under Nelson’s Christmas tree (I wouldn’t mind one either).
‘ORGANISING THE UNION – A CENTENARY OF SIPTU, 1909 TO 2009’ is my sort of history book. It’s crammed with period photos, posters, flyers and illustrations of badges down the ages in a chronicle of struggle by the incredibly knowledgeable Francis Devine with a narrative that charts Ireland’s biggest union from its formation as Jim Larkin’s Irish Transport & General Workers’ Union. This is one for anybody with an interest in Ireland’s trade union history and at €15 even us public sector workers can just about afford a copy after the Fianna Fáil/Green Party Budget.
Sick of the conveyor-belt sappy sob stories on the telly at Christmas? Then put on the ‘IRISH DESTINY’ DVD, a powerful Irish-made Tan War drama from1926 that charts the love story involving an IRA Volunteer against the background of the fight for independence. Believed lost in the archives but rediscovered and restored, when it was first mooted for release in Britain, censors banned it, so there’s an added value in the €19 price tag.
The huge range of T-shirts (€15) include the acclaimed IRA - Undefeated Army, IRA – THE WIND THAT SHOOK THE BARLEY and the very tasteful YOU ARE NOW ENTERING FREE DERRY T-SHIRT featuring murals painted on the world-famous Free Derry Corner in interntaionalist solidarity with struggles in Palestine, Cuba and the Basque Country.
For something discreet but intimate, how about an individually-crafted FENIANS STERLING SILVER SIGNET RING at €45? I’m snapping up a TWO HEARTS CLADDAGH FENIAN RING (ladies’ at €35, men’s at €40 – there’s 10-carat gold versions too, up to €140). What’s special about these ones are that, although similar to the Claddagh ring seen in commercial shops, it first appeared around 100 years ago and is distinguished by its lack of a crown, to symbolise the struggle for a free, republican Ireland. One sure to be appreciated by the folks overseas is the MY HEART IS IN IRELAND PENDANT (silver and 18-carat gold), €79. IRELAND 32 PENDANTS, engraved in Celtic letttering with the number 32, cost just €50.
There’s a range of other Celtic and Irish jewellery pendants, brooches and rings that can be seen online.
And don’t forget the Óglaigh na hÉireann-branded jewellery, clothing, badges and items that make Little Corporal Willie O’Dea’s moustache bristle every year. You’ll find that something extra in the Sinn Féin Bookshop.