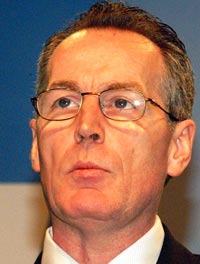 SINN FEIN Junior Minister in the North’s Executive, Gerry Kelly has said that those responsible for a bomb threat at his family home on 9 December will in no way detract him from his work as a public representative.
Speaking from the United States, where he was marking 25 years of the MacBride Principles, Gerry Kelly said;
“My constituency office was phoned this morning and a man claimed that a bomb would go off outside my family home within an hour.
My home was subsequently checked and nothing was found.
I condemn this cowardly threat against my family.
As a public representative I have received threats before and this latest one will in no way detract me from carrying out my work on behalf of the people who elect me. Be assured that we will not be intimidated.
It shows the calibre of the people responsible that they would threaten my family and neighbours in such a way.”