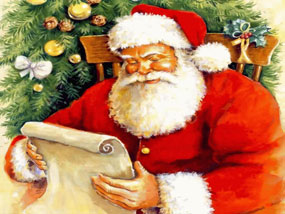 Checking his list, and checking it twice, gonna find out who’s naughty and nice...