Increased action needed in support of freedom for Miami Five 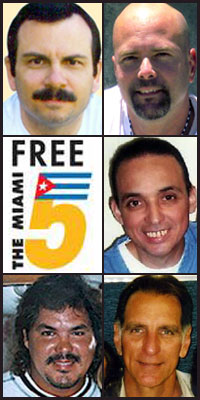 THE final re-sentencing process for the Miami Five took place on Tuesday last in the same Miami Courthouse and before the same judge that ordered their initial incarceration.   The resentencing did not produce any more justice than their 11 preceding years inside the US justice system.
The Miami Five – Gerardo Hernández, Ramón Labañino, Antonio Guerrero, Fernando González and René González are Cubans arrested by the FBI in 1998.
The Five were accused by the U.S. government of committing espionage conspiracy against the United States, and other related charges.  But the men pointed out vigorously in their defence that they were involved in monitoring the actions of right-wing paramilitary groups based in Miami, in order to prevent terrorist attacks against Cuba.
After an 11-year legal battle, Fernando’s original sentence (19 years) was reduced to 17 years and 9 months, Ramón’s (1 life term plus 18 years) to 30 years and Antonio’s (1 life term plus 10 years) to 21 years and 10 months with 5 years of supervised release. The sentences of Gerardo (two life terms plus 15 years) and René (15 years), having been ratified by the US Court of Appeals, were excluded from the re-sentencing process.
Earlier this year, hundreds of elected legislators from all around the globe including former heads of state, ministers and former UN High Commissioner for Human Rights and former President of Ireland Mary Robinson, jointly filed an appeal to the US Supreme Court asking it to review the case, an appeal unprecedented in the US legal history.  Ten Nobel Laureates did likewise. Despite these developments the US Supreme Court ignored their appeals and chose not to review the case.
Speaking on the ‘Roundtable’ television program, Ricardo Alarcón de Quesada, president of the Cuban Parliament emphasised that the U.S. government has to acknowledge that international pressure is growing and that it is now up to US President Barack Obama, “who is aware that they were unjustly sentenced”.
He stated that the Five should not have been deprived of freedom even for one second. He said that while any punishment for these men is unjust, the reduction of the sentences is still important because it should change the conditions of their imprisonment, adding that the re-sentencing of three of them is an additional argument for continuing and intensifying the struggle for the immediate release of Gerardo and his four comrades.
The following is the statement issued by Antonio, Ramón and Fernando:
Dear sisters and brothers from Cuba and from all over the World:
We have already served more than 11 years in prison and there is still no justice at any level of the American legal system.
Three of us have come to the Miami Court to be re-sentenced due to an order from the Eleventh Circuit Court of Appeals, which determined that our sentences had been erroneously imposed.
Our brother Gerardo Hernández, who is serving two life terms plus 15 years, has been arbitrarily excluded from this re-sentencing process. His situation remains the principal injustice in our case. The US Government is well aware of the falseness of the accusations against him and the unfairness of his sentence.
This has been a complex process, difficult and much discussed in every detail, in which we participated along with our counsels. We did not give an inch in our principles, decorum and honour, always defending our innocence and the dignity of our homeland.
Just as it did at the moment of our arrest and at other occasions during these long years, the US Government proposes now that we collaborate to obtain more benevolent sentences. Once again, we have rejected such proposals, something that we never will accept under any circumstances.
Present in the results of these re-sentencing hearings are the work of the legal team and the indestructible solidarity of all of you.
It is significant that the US Government, for the first time in 11 years, was obliged to recognise that we did not cause any damage to its national security.
Also, for the first time, the prosecutor publicly recognised the existence of a strong international movement in support of our immediate freedom, a movement that affects the image of the US judicial system in the eyes of the international community.
Once again the absolute political character of this process is confirmed.
We the Five are punished for accusations that never have been proved. Although three of our sentences were partially reduced, the injustice remains for all of us.
The Cuban-American terrorists continue to enjoy total impunity.
We reiterate: The Five are innocent!

• Support for the Miami Five in Derry