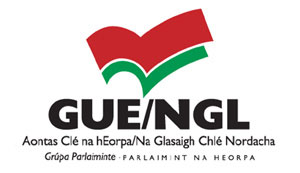 LOOKING BACK over the year, we’ve picked out some of the wide range of issues on which MEP Bairbre de Brún has been vocal and active.

MEP Bairbre de Brún has welcomed the European Parliament decision to support Dell workers but pointed out:
“It does not absolve Dell of their responsibility to the workers who have been made redundant in the pursuit of even greater profits.
Speaking in Strasbourg, she said:
“The decision to close the factory was unnecessary, as is shown by the fact that Dell is buying a competitor company – Perot Systems – for US$3.9 billion.
“The European Commission also has some hard questions to answer. Why did they approve €54.5 million funding for Dell to establish a new manufacturing plant in Poland? This amounts to state aid for sacking the workers in Limerick.
Limerick Councillor Maurice Quinlivan added:
“This is a very important first step for workers and their families. The next step is for the Irish Government to do everything in its power to ensure Dell repays any grants they received and use the profits generated in Limerick over the years to provide fair compensation for the Dell workers.”

MEP for the Six Counties Bairbre de Brún met with Regional Development Minister Conor Murphy regarding a sustainable future for transport and movement towards a low carbon transport system in the North.
Speaking after the meeting, which took place at Stormont, Bairbre de Brún said:
“The meeting focused on best practice in places like England, Scotland and Wales as well as the 26 Counties, and trends at EU level after the publication by the European Commission of Communication, ‘A Sustainable Future for Transport: Towards an Integrated, Technology-led and User-friendly System’.
“A quality public transport system is one essential part of moving to a sustainable future for transport alongside other measures such as integrating transport requirements with all new planning, improving the environment for those cycling and walking, specialist transport advice to business and low-carbon vehicle procurement.
“I urged the minister to maximise the expertise and support through the EU Taskforce and through engagement in the NSMC and BIC.”

BAIRBRE de Brún MEP joined other MEPs as part of a European Parliament delegation visiting Washington DC ahead of the Copenhagen Climate Change summit.
Bairbre de Brún said:
“All eyes are on how the US will act at the crucial UN climate talks in Copenhagen. The US has been conspicuously absent from previous international climate agreements and this, in turn, has had an effect on what emerging economies like China and India are willing to promise.
“Now the Obama administration is re-engaging seriously in climate negotiations and promising domestic US action also. The question remains what legislation Congress can or will pass ahead of the December Copenhagen deadline.
“The delegation has discussed similarities between the EU Energy and Climate package of legislation and the draft American Clean Energy and Security Act 2009 as well as legislation currently under discussion in the Senate.
“For the first time a pathway is being set out to move the US towards a low carbon economy but a number of steps still need to be taken to make this a reality. The cross-party European Parliament delegation of MEPs from the Environment and Industry committees is keen to discuss these steps in advance of the Copenhagen Climate Change summit in December.”

COUNCILLOR Billy Leonard has expressed satisfaction with his hearing at the European Parliament Petitions Committee on the contentious issue of four waste management sites in the Ringsend area outside Coleraine after an initiative to invite the councillor from Bairbre de Brún MEP.
Councillor Leonard said:
“I am very glad for the community around Ringsend that there has been positive movement.
“It was very clear at the hearing that MEPs saw the need for EU action now. It is clear that further pressure from Brussels could be helpful in addressing some of the many concerns the people of Ringsend have.”
Bairbre de Brún MEP, who was present and spoke on the issues at the Petitions Committee hearing, said afterwards:
“MEPs were clearly moved when they heard of the experience of local residents in the Ringsend area. The MEPs want to look into the matter further and have decided that the European Parliament Committee will contact the DoE to seek information about their response to the concerns raised.”

MEP Bairbre de Brún has said the EU needs to take action to ensure that the current problems that are forcing farmers out of the dairy industry can be resolved.
She was responding to a report from the European Commission. De Brún stated:
“Clearly the logic of the Commission’s report is that there is a situation where farmers are not getting a fair price for what they are producing. Immediate action is required. Farmers cannot continue to produce at a loss and price levels at present are having an enormous impact on the welfare of farmers and farm families.
“If the European Commission is pointing now to the question of price transmission between producers, processors and retailers, then they need to lay out a concrete path by which they feel they can make a real difference to producers. Dairy farmers need a fair price and they need it now.”

BAIRBRE de Brún MEP has called on the Executive to set energy efficiency measures among its top priorities
“Energy efficiency can help businesses through the economic crisis by lowering costs, can help less-well-off families out of fuel poverty, and a shift to an energy-efficient economy can help economic growth.
“The Executive must use the resources and help available through the EU Task Force to put our economy on an energy-efficient path. Europe is clearly showing that climate-friendly policies such as energy efficiency and renewable energy can help economic growth and the Executive and Assembly must not be left behind.
“It is time to step up a gear in our engagement with Europe on this issue and to put energy efficiency and renewable energy at the heart of the Executive’s planning in the time ahead.
“If we move quickly we can be at the forefront of those seeking solutions to tackling climate change and the challenge of energy security. If we fail to move we will end up importing solutions from others.”

MEP Bairbre de Brún has been appointed to the Environment Committee in the new session of the European Parliament. This is particularly important in light of talks to reach a new global agreement to tackle climate change.
She will also sit as a substitute member of the Regional Development (REGI) Committee, which helps regions develop business and infrastructure and deals with cross-border co-operation.
The Six-County MEP has also been appointed to the Petitions Committee, to which individuals and groups can apply if they feel public bodies are acting contrary to EU law.
Bairbre said:
“These committee positions will allow me to build on the work I was privileged to carry out on behalf of constituents here in the last five years. I am particularly pleased that the new role on the Petitions Committee will allow me to assist citizens in bringing their concerns directly to European bodies that can initiate direct investigations to try and resolve those concerns.
“I have helped to shape EU policy on climate change and the environment. At the end of this year there are crucial talks on climate change in Copenhagen that will shape the future international response to global warming. I have already participated in the UN talks and will continue to build on that important work.
“In the last term I was able to bring the powerful REGI Committee to the north-west and I hope to be able to build on that work and continue to break down the barriers that undermine the development of the region.
“I want to ensure that we maximise the resources available through Europe by promoting the Executive’s Action Plan on the EU Task Force Report and unlocking resources, for example, to improve our skills base. I also want to build on the opportunities from the European Economic Recovery Plan particularly in relation to the ‘green’ economy.
“I will also continue to fight for our farming industry and farm families, particularly in relation the major of issues of CAP, less-favoured areas and the milk industry.”

We must face down the scourge of homophobia

MEP Bairbre de Brún has said that we all have a responsibility to face down the scourge of homophobia and homophobic attacks
Speaking after figures revealed that over 64% of attacks on the lesbian and gay community go unreported in the North of Ireland, de Brún said:
“The fact that homophobic attacks continue with a high incidence and that those attacked do not have the confidence to come forward and report the crime is an indictment of our society as a whole.
“More needs to be done to tackle the scourge of homophobia and homophobic attacks. These are hate crimes on a par with sectarianism and racism and they need to be denounced by all of us.
“We need to empower and work closely with members of the LGBT community, with statutory organisations and the PSNI in order to show that these attacks and the negative attitudes that lead to such attacks are confined to the past.”

MEP Bairbre de Brún has said that the Executive should follow the lead of countries across Europe by grasping the opportunities and investing in ‘green’ jobs.
She was speaking after the European Commission announced that €105 billion will be invested in the ‘green’ economy through the EU Cohesion Policy.
“There is a very real opportunity to draw on EU funding to create green jobs. This investment could underpin long-term job creation and also the fight against climate change.
“There is €48 billion for measures aimed at achieving EU climate targets and creating a low carbon economy including €23 billion for railways, €6 billion for clean urban transport, €4.8 billion for renewable energies and €4.2 billion for energy efficiency.
“There is also significant focus on supporting small and medium businesses (SMEs). The Cohesion Policy makes available €3 billion for the promotion of environmentally-friendly products and production processes in SMEs. We made a good start locally in with the excellent cross-border STEM project but we have failed to build on this.
“We must put ‘green’ jobs at the heart of our economic development plans or lose out to others who do.”

SPEAKING from Gaza, MEP Bairbre de Brún has said that the level of destruction is unimaginable and that almost the entire economic and social infrastructure of the area has been destroyed.
De Brún is in Palestine as part of a European Parliament delegation of MEPs looking at the humanitarian situation in Gaza.
She said:
“The level of destruction is unimaginable. Homes and entire communities have been devastated. The social and economic infrastructure has been almost totally destroyed. Hospitals and health clinics have been attacked and badly damaged.
“In one area we visited this morning, 250 homes had been turned into rubble.
“We also visited the Atta Abu Jubba company which is the biggest factory in Gaza and the only cement factory supplying all of Palestine and it had been destroyed meaning that the rebuilding that is needed will be much more difficult.
“There is a very deep frustration and anger on the ground at the lack of accountability, that no one has been held to account for what has happened.”
John Ging, Director of UNRWA operations in Gaza, summed the situation up this morning when he said to us that ‘It is not about being pro or anti-Israeli but about being pro basic, fundamental humanity built around the rule of law’.
“People who we spoke to today in Gaza need to know that the international community is committed to a peaceful future, that steps needed to underpin reconstruction are taken and that there will be proper mechanisms of accountability.”