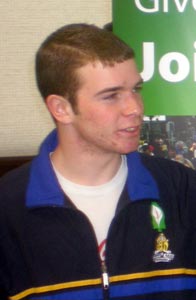 A fighting voice for young people

FROM Togher on the south side of Cork City Donnchadh Ó Laoghaire (20) was appointed National Órganiser for Ógra Shinn Féin last month. He has taken a break from study, after completing two years of a Law degree, to undertake the role. Here he speaks to ELLA O’DWYER about the role of Ógra in the wider republican struggle