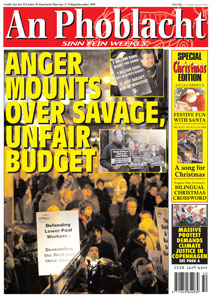 PUBLIC SECTOR workers – including nurses, firefighters, teachers, civil servants, council staff and community workers – staged an angry tea-time rally at the Dáil on Tuesday against the Fianna Fáil/Green Party Budget that will cut their pay by up to 15% or do away with jobs altogether in some sectors.
The Government’s Budget and media onslaught against the public sector is being seen by observers as a softening up of public opinion to allow employers force down wages and erode workers’ rights across the entire economy, including the private sector, and pave the way for possible attacks on the minimum wage.
The head of the largest public sector union has said Brian Cowen’s government is facing “a potentially explosive situation” over its offensive against public service pay and conditions.
IMPACT General Secretary Peter McLoone said trust has effectively broken down between the trade unions and the Government and there is no basis now on which they would be able to go back into talks in the short-term.
All-out strikes are a possibility, he said, because of the strength of feeling amongst public servants.
Speaking in the Dáil Sinn Féin Workers’ Rights Spokesperson Martin Ferris TD said a well orchestrated campaign by business interests influenced the Government’s decision to cut public sector pay at the lower levels. Ferris said Fianna Fáil’s history with big business in the state means that the likes of IBEC and ISME have a huge advantage when it comes to influencing the decisions of the current Government.

NEXT TARGET
The North Kerry TD said:
“The truth of this matter, as the Minister well knows, is that what we witnessed was not a popular uprising by old age pensioners and the unemployed and ordinary workers demanding that teachers and nurses and Guards and those who work in Government departments should have their wages cut again, but a well orchestrated campaign by business interests and right wing pundits in the media.
“The ink was not dry on the Budget before the same forces started to demand a reduction of the minimum wage. This proves the point that private sector workers are the next targets after the attack on low-paid and modest income earners in the public services.
“I received a number of emails for example claiming to be from small business people here which in fact were sent by the Irish subsidiary of a major overseas brokerage firm. IBEC and ISME organised their members in what was an effective lobby and fair play to them. That is the way that politics work. However, as we know all too well from Fianna Fáil’s history with big business in this country; they have a huge advantage when it comes to influencing the action those in power take or don’t take.
“The old saying of ‘who pays the piper calls the tune’ springs to mind.
“Truly the days when a Fianna Fáil leader could claim to be the leader of a party that represented the people of no property are long gone.”