Women central in the struggle, central to building the peace 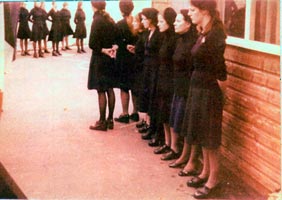 WOMEN in Ireland continue to be poorly represented in peace-building despite international recognition of their importance in such a process, according to two leading academics.
In a critique of the Eames/Bradley Report on the past (Women, Gender and Justice in the Eames/Bradley Report), Catherine O’Rouke of the Transitional Justice Institute and Margaret Ward of the Women’s Resource and Development Agency accuse it of failing women on almost all levels.
O’Rourke and Ward point out that only two out of eight members of the Consultative Group were women.
O’Rourke and Ward also highlight the report’s gender blindness in its failure to identify and address the specific experiences of women as opposed to people in general. They also underline the importance of integrating gender into the core of the way in which we decide to deal with the past and shape the future.
“Gender ‘neutrality’ is not satisfactory,” they say. “The gender-specific experiences of women should be acknowledged and specific provision made for the inclusion of women in all aspects of dealing with the past.”
O’Rourke and Ward point out that 91% of those killed in the conflict were men while the majority of members of victims’ groups are thought to be women.
“The absence of men from households due to conflict-related deaths and imprisonment meant that it was largely women who managed the poverty that resulted from the conflict.”
They argue that to neglect social and economic aspects of conflict and conflict resolution discriminates against women and they call for any effort to deal with the past to redress the toll of poverty on women.
O’Rourke and Ward also highlight the issue of domestic violence and the disproportionate number of women using prescription drugs or suffering from drug and alcohol dependency or depression.

ABSENCE
For Andree Murphy, of Relatives for Justice, the issue is not just the absence of women and gender awareness within the Eames/Bradley Report but also the failure to acknowledge and understand the specific experience and needs of republican women within the wider transitional debate.
Murphy argues that the experiences of republican women are absent from the entire debate.
Speaking to An Phoblacht, Andree Murphy outlines some of the issues which need to be addressed.
“Women in republican areas bore the brunt of British repression.
“At times, raids and harassment were daily occurrences. During those raids property was destroyed and education and employment disrupted, resulting in real hardship and poverty. But women still put their children through school, ensured Santa came to visit and put meals on the table, often at great personal cost to themselves.
“Republican women activists, and in homes where their partners were known activists, were subjected to a particularly intense experience of raids and harassment. Their homes were not only subject to RUC and British Army harassment but also deliberately targeted for loyalist attack.
“The murders of Theresa Fox, Roseanne Mallon, Theresa Clinton and Kathleen O’Hagan are just three examples of how women could be deliberately targeted and murdered as part of the wider terror campaign against republicans,” Andree points out.
“Female political representatives, both elected and unelected, were subject to the ongoing threat of unionist paramilitary violence. Attacks on numerous homes, including that of Sinn Féin Councillor Annie Armstrong, and the murders of Máire Drumm and Sheena Campbell were the ultimate manifestations of this.”

PRISONERS AND VISITORS
Andree considers the very specific experience of republican women and prisons, both as prisoners and visitors, and she points to it as an experience which includes not only prisons and prisoners in the North of Ireland but also south of the border, across Britain and within mainland Europe.
“This experience must be addressed in its broadest context. It is touched upon by O’Rourke and Ward but only republican women activists can really identify the issues and experiences which should be addressed within a transitional process.”
Andree Murphy argues that the marginalisation of the experience of women republican prisoners can be most graphically illustrated by the lack of any campaign to secure the places where that experience took place.
“Unlike the ongoing political controversy concerning the future of the Long Kesh site, there is no debate whatsoever about the possible retaining of places which held women prisoners. Republican women prisoners endured horrific abuse and violence in some of those places and yet acknowledgement of that experience has been marginalised.
“Furthermore, the experience of mothers who were imprisoned is an area of unbearable pain and tremendous courage which has never had more than a cursory acknowledgement. Space must be created for this experience to be valued.
“The experience of women and children who spent years visiting prisons must also be acknowledged and explored. This is currently being done in very positive settings of art and drama through the ex-prisoners’ projects. But this isn’t adequate to the task of fully incorporating that experience in the way we remember the past and build the future.”
During the debate on what was valuable regarding Long Kesh there was a decision to demolish the Quakers’ Hut and the Visiting Block at a very early stage.
“No public consideration was given to the fact that, of the thousands who interfaced with the prison during our conflict, the overwhelming majority were women and children visitors to the Cages and Blocks. Their experience has not been acknowledged nor valued and this was manifested in a very physical way when those areas were demolished,” says Andree Murphy.
“The Visiting Block in Crumlin Road Jail is now the reception area – no acknowledgement again of the hardship faced by the mothers, wives and children of the men who were held in that jail. This is exactly the sort of social history which must be valued and so often is written out and dismissed.”

THE SOUTH
It has been widely acknowledged that the Eames/Bradley Report is partitionist in its approach in all respects. Irish women from across the island were affected by the conflict. Murphy argues there is a particular experience in the South that has been censored and marginalised but which must also be heard.
“Women who were caring for people injured as a result of the conflict or who were bereaved as a result of the conflict south of the border had a particular experience which must also be represented in any process.
“In all of these experiences, a number of Irish statutory agencies were responsible for degrees of neglect and, often times, when the families were republican, engaging in cruel and unrelenting harassment and persecution.
“In particular An Garda Síochána must be involved in the process. Undoubtedly, there will be important testimony from An Garda about their experience of the conflict. However, An Garda as an organisation, and in particular its Special Branch, was responsible for actions of abuse and cruelty which affected not just suspected activists but also their families and friends.
“To date, the rejection of any attempt to impose a hierarchy of victims has been understood in terms of the marginalisation of those who suffered at the hands of the British state and pro-state forces. But there is another hierarchy we are in danger of overlooking: the one which marginalises the experience and contribution of women, particularly republican women. The debate around women and transition has only just begun,” Andree Murphy says.
“It’s important that we enter that debate.”