Basque extradition would be 'grossly inhumane' 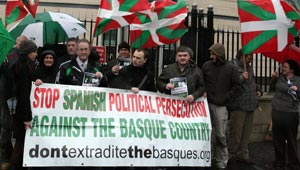 NO EXTRADITION: Basque solidarity in Belfast

AS Iñaki de Juana’s two-day extradition hearing began in Belfast on November 12, supporters rallied in a demonstration called by the Don’t Extradite the Basques Campaign.
Michael Culbert, director of the ex-prisoners’ group Coiste na n-Iarchimí, addressed the supporters, who included republican ex-prisoners, local Sinn Féin councillors, members of Belfast’s Basque community and others.
“The case against Iñaki is motivated by vindictiveness on the part of the Spanish government despite the fact that there is no evidence against him. The charges are spurious and absurd,” Culbert said at the rally.
The Spanish authorities are trying to extradite the former prisoner and hunger-striker, who served 21 years in Spanish jails, from Belfast, where he moved immediately after his release in August last year, on charges of “glorifying terrorism”.
The arrest warrant is based on a single media report of somebody at a rally in Donostia/San Sebastian last August, which was celebrating de Juana’s release from prison, reading a letter that used the popular Basque expression “Aurrera bolie” (“Kick the ball forward”). The Spanish authorities claim this phrase constitutes a call for the continuation of armed struggle.
De Juana was not present at this rally and denies writing such a letter, which Spanish police admit they cannot produce.

Abuse of process
Judge Tom Burgess ruled in March that “glorifying terrorism” was an extraditable offence that had an equivalent under the British Terrorism Act 2006. He said that he did not have to study the quality of the evidence against de Juana, as that was a matter for the Spanish courts.
The defence team in last week’s hearing argued two main points: that the Spanish authorities were knowingly abusing the extradition process, and that extradition would cause a disproportionate threat to de Juana’s health.
Edward Fitzgerald QC, defending, said he believed the Spanish authorities were abusing the extradition process because they knew they did not have any evidence against de Juana, and that the case was politically motivated.
He explained that while the defence had repeatedly requested the case files of evidence against his client, the Spanish authorities had refused to provide any such information or respond to the requests.
Referring to an article published in the pro-Spanish daily newspaper El Pais, which said the prosecution’s case against de Juana “was like trying to build the Titanic with toothpicks”, Fitzgerald said the description was accurate.
“This is an absurdity, but the fact it’s an absurdity doesn’t make it harmless. It makes it dangerous given the consequences,” he said.
The defence also pointed out that the involvement of the Spanish Association of Victims of Terrorism organisation in all stages of the case against de Juana, – from urging it to be launched, to working closely with the prosecution and continuing to monitor the case – reflected the lack of independence on the part of the prosecution.
While the judge had ruled in March that it was not his role to examine the evidence against de Juana, the defence argued that the total lack of evidence of a crime from the prosecution was itself evidence that the charges were politically motivated.

‘Grossly inhumane’
Senior university lecturer at Cambridge University, Dr Adrian Grounds, an expert on the impact of imprisonment on the psychological health of detainees, testified that in his independent opinion, de Juana would face a very serious deterioration in his health and likely, if not certain, death through hunger strike if he was extradited.
Dr Grounds, who had interviewed de Juana for eight hours, said that de Juana’s previous experiences in Spanish prisons had been extremely traumatic and that while he was “a very strong, ideologically committed and resilient person”, his prison experience had left him suffering from post-traumatic stress disorder, depression and absolute exhaustion.
De Juana was subjected to repeated beatings while in jail, and Dr Grounds cited the abuses carried out against Basque political prisoners documented by the UN’s Committee on the Prevention of Torture as well as reports by Amnesty International and Human Rights Watch.
He was held in solitary confinement for more than 17 years of his total 21 years in jail. When protesting against attempts to lengthen his term after he had completed his 19-year sentence, de Juana endured first a 63-day hunger strike and then a 115-day strike during which he was force-fed while shackled to his hospital bed.
Dr Grounds said that to return him to the Spanish prison system would very likely result in de Juana going on a hunger strike to the death. He said that in his opinion, this would partly be a political act of protest, but it would also reflect de Juana’s inability to return to the conditions that had caused his exhaustion and PTSD.
Fitzgerald said: “Would it now be inhumane to put him back in custody on the basis of what someone says someone read out at a rally though no-one has the document? We say it’s grossly disproportionate and inhumane to do that.”