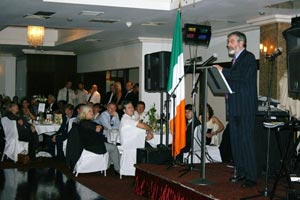 THE first-ever annual Sinn Féin London Dinner took place at the weekend at the Crown Moran Hotel, where Gerry Adams hosted a packed event attended by individuals and organisations from across the Irish community and beyond.
A sold-out event, organised by Friends of Sinn Féin London, included guests former London Mayor Ken Livingstone, Labour Party MPs Diane Abbott and Jeremy Corbyn, actor Adrian Dunbar (who also took the role of Fear An Tí) and Michelin star chef Richard Corrigan, who inspired the amazing menu for the night.
Sinn Féin Vice-President Mary Lou McDonald and Minister Gerry Kelly were also there.
Following a packed reception to start the evening, Mary Lou McDonald welcomed the wide representation from the Irish community, including leading Irish business figures such as VGMG’s Vince Power and others from arts and culture, entertainment, the GAA and the Irish counties associations.
Alongside the legal, human rights and academic representatives, was a range of campaigning and grassroots groups such as the Agreed Ireland Forum, Wolfe Tone Society, Labour Party Irish Society, Progressive London and others, including from trade union Unite in London. Some had travelled from Ireland to join tables with friends and family in London, reflecting the strong cultural and political ties between Ireland and the city.

LANDMARK
In his address, Sinn Féin President Gerry Adams paid tribute to the role of London’s Irish community in all aspects of life in the city over many decades, in particular noting the history of the Crown Hotel itself, a landmark for Irish people in a part of the city which was one of the oldest areas in which Irish immigrants settled and has been immortalised in the song McAlpine’s Fusiliers: “The craic was good in Cricklewood and they wouldn’t leave the Crown.”
Dedicating his speech to the late Redmond O’Neill, who died recently, the Sinn Féin president acknowledged Redmond’s huge contribution to Ireland and progressive politics in Britain and internationally.
Gerry Adams went on to describe political progress made in the Irish Peace Process and explain the agenda over the coming period, notably to put Irish unity on the agenda and encourage a debate in Britain in the context of the recognition in the Good Friday Agreement of self-determination.

FEBRUARY CONFERENCE
The Sinn Féin president announced that a major conference will take place at the Trades Union Congress House on 20 February and he encouraged people to take part through whatever avenue or organisation they could.
Later, Ken Livingstone underlined this, and spoke of the immense progress made in recent decades and in the renewed pride of the Irish community in London, reflected in the St Patrick’s Day parade and events which have drawn tens of thousands of people in successive years since he made it an official part of the London events in the city.

THE Friends of Sinn Féin have had another first with the inaugural FOSF dinner in Scotland.
Held the weekend before last in the historic setting of St Andrew’s on the Square in Glasgow, a beautifully preserved 18th century church building – now a top venue for such events – the night was attended by both long-time friends and supporters from across Scotland and also many figures from the business and Irish community.
The event was addressed by Gerry Kelly and by Pat Doherty, a native of  Glasgow.
This was FOSF’s first venture ‘north of the border’ and will now be an annual event with great potential for an even greater turn-out next Year.