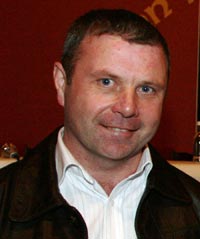 “WHAT is certain is that scores of former RUC detectives were hand-picked – over the past 12 to 18 months – to join a new, tight-knit and tightly-run PSNI unit called REMIT. That unit is now responsible for issues of ‘subversive activity’ and ‘national security’ – or in the view of some, ‘political policing’. This is the same ‘remit’ of activity that Special Branch is, and always has been, responsible for covering” – Jarlath Kearney writing in Daily Ireland in 2003 one year after the PSNI raided Sinn Féin’s Stormont offices precipitating the fall of the power sharing executive.
Last week’s high profile raid on the home of a member of the Sinn Féin leadership, Seán Hughes, makes it clear that the old counter insurgency strategy of Britain’s ‘Northern Ireland Office’ (NIO) is still alive and well.
Seán Hughes’s home near Dromintee in South Armagh was raided last Tuesday, 10 November. The homes of relatives and neighbours of Seán were also targeted in the operation.
The raids were carried out by the Serious Organised Crime Agency (SOCA), which is the London based organisation that replaced the discredited Assets Recovery Agency (ARA) run by former top Special Branch man Alan McQuillan.
Speaking to An Phoblacht Seán Hughes, a highly respected republican, described the raids as, “politically motivated actions”.
He added “Following the politically motivated actions of SOCA a number of ridiculous and unsupported allegations have been made against me, members of my family and  neighbours. The timing exposes the real political agenda behind these raids. Already rejectionist unionists have been quick to seize on the raids to keep power in the hands of London based securocrats.
“There has been a deliberate and sustained campaign for many years to attack my character. I am a member of the Sinn Féin leadership and strong advocate of the current Peace Process. I have worked tirelessly in my local community and across Ireland to gain support for this peace strategy and what happened last week won’t change that”, Hughes said.
“Allegations have been made in the media by SOCA that I own 11 houses and an apartment. This is totally untrue. The facts are that myself and my wife Annette own two houses – a Housing Executive property which I lived in for many years and later bought and a new home which I recently built on the family farm and which was paid for by re-mortgaging the first property.
“I’m a farmer and have no other income. My books are available for anyone to see.
“My family is now faced with financial ruin. I’m a farmer with sheep and cattle but I can’t even get money out of the bank to buy feed”, he said.
Seán Hughes also highlighted the indiscriminate way in which his family and neighbours were dragged into what he called, “the securocrats agenda.
“The bank accounts of my mother, my brother, my two sons and my neighbours have also been frozen without any explanation.
“My mother is at her wits’ end because she’s had her life savings frozen. My brother is a building contractor who employs local people. He has had his accounts frozen.
“A young married couple from the area, with four children, have had all of their assets frozen.  They have no idea how they are going to cope and get through Christmas.
“This is clearly a politically motivated assault on me and my family. Indeed when I remonstrated with a man who was raiding my home – he told me that it was payback time”.
Despite being described as an independent agency it is clear that SOCA, is following the RUC/Securocrat agenda in its attempt to criminalise republicans and undermine efforts to transfer power on policing and justice.
As well as last week’s raids carried out on Seán Hughes’s home in the full glare of the media, SOCA has also been involved in a high profile campaign against North Louth republican Tom Murphy.  The organisation has also targeted Belfast republican Peter Lynch.
Sinn Féin MP for Newry/Armagh Conor Muphy said:
“The events of the past week show clearly the need for republicans to keep driving forward an agenda for change in policing.  The people behind these raids fear accountability, fear democratic participation and fear republican communities being active on policing issues.  Their agenda is about the past.
Murphy said that the timing of the raids were ‘no coincidence’ with the negotiations on transferring powers on policing away from the faceless securocrats in Whitehall coming to a conclusion and with political unionism once again in disarray.”
He went onto say that republicans would not be intimidated from continuing to expose the negative securocrat agenda which played out in South Armagh last week.”
Meanwhile both Seán Hughes and his wife Annette dismissed unionist and SDLP calls for her to resign from the area’s District Policing Board.
Annette Hughes said, “I have absolutely no intention of resigning from the DPP at the behest of unionist politicians or the SDLP who do not wish to see republicans anywhere near policing.
“There is much work to be done and neither Willie McCrea nor anyone else will deter me from carrying this work out.
“Even in this new period of policing in South Armagh it has been used and abused to harass and intimidate people of this area. Recent raids such as that on my home have been heavy handed and disproportionate. Many PSNI officers are more interested in settling old scores than delivering a proper policing service to our community”.